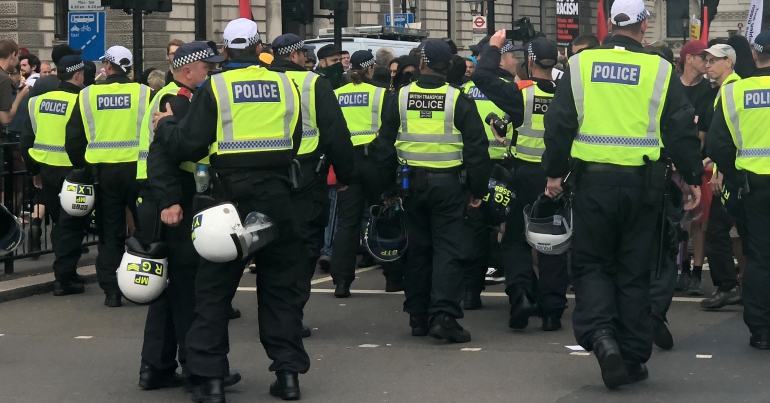 A video by the Network for Police Monitoring (Netpol) delivers a chilling warning about our right to protest in 2018. War on Dissent: the Shrinking Space for Protest in the UK explains how the police are clamping down on our right to dissent. And it is essential viewing for anyone taking action, or concerned about our civil liberties.

As Netpol coordinator Kevin Blowe states in the video, we have rights to freedom of assembly and expression. But these rights are being undermined. Green peer Jenny Jones sets out the problem and talks about how policing has changed since she went to her first protest 50 years ago:

It’s obvious to me that policing has changed a lot. The police seem to have lost focus on facilitating peaceful protest. What they seem to be doing is prioritising private companies and protection of property over local people who are there to protest something they care very deeply about.

This is shown in the violent and oppressive policing used against anti-fracking protesters at places like Preston New Road; or the draconian actions taken against people trying to save trees from destruction in Sheffield. Time and again, policing priorities appear to focus on protecting property and companies rather than our right to dissent.

The film also examines the labelling of protesters as domestic extremists. It explains that the police do not appear to differentiate between peaceful and violent protest – but focus on whether a protest breaks the law. Blowe states:

The police… argue… that any protest which involves breaking the law lacks legitimacy.

Blowe also details how words like “radical” and “radicalisation” are now associated with terrorism.

We’ve reached the stage now where it’s actually impossible almost to think about words like radicalisation or radical without thinking about the association with terrorism.

And, Blowe argues, this has happened through labelling most protesters, but especially those that engage in civil disobedience as domestic extremists.

Solicitor Michael Oswald argues that it’s “no coincidence” that the label sounds like a terrorist and that:

But it’s Blowe’s conclusion to the film that is particularly chilling:

If you’re constantly afraid of what’s going to happen to you if you attend a march or a rally then that poses as much risk to those fundamental rights as the state deciding that they’re just going to ban a demonstration completely.

The policing of dissent poses risks to our freedom and fundamental rights. This is not something we should take lightly. But we can counter it. We can challenge the notion of domestic extremism. We can challenge oppressive policing aimed at aiding corporations rather than communities. And through working together, we can create spaces and the support needed for effective protest.

– Check out Green and Black Cross and find out about your right to protest.