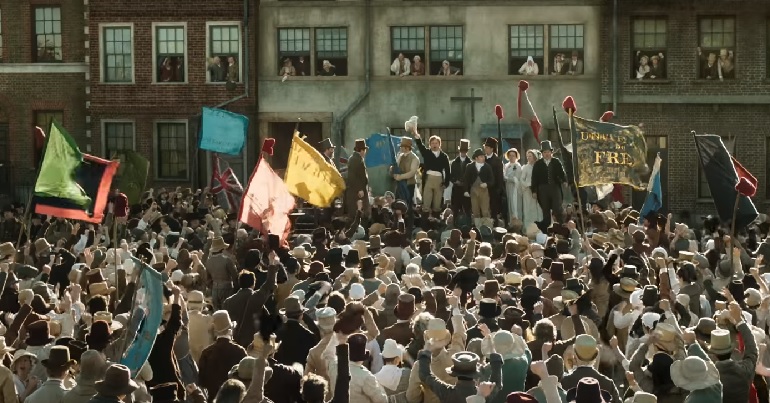 The film Peterloo comes out on 2 November. It tells the story of a “peaceful pro-democracy rally at St Peter’s Field in Manchester [which] turned into one of the bloodiest and most notorious episodes in British history”.

As director Mike Leigh explains, it shows how “between 60,000 and 80,000 British citizens gathered peacefully in the name of liberty and freedom from poverty to demand parliamentary representation”; and how what followed was:

He then describes how, “swinging sabres and trampling the gatherers, the local Yeomanry” (a cavalry force of men who held small estates) killed 18 civilians and injured over 700.

Authorities also arrested journalists and jailed people who reported on the event. An official inquiry, meanwhile, cleared those responsible for the massacre of any wrongdoing.

We now know this event as the Peterloo Massacre. And historians say it strongly influenced the growing fight for political reforms (such as the expansion of the right to vote) and boosted the development of the trade-union movement.

The Peterloo massacre was not something I was taught in school. I had a typical comprehensive history education: kings and queens, nothing about my people, nothing about working-class history. It was only through my grandfather that I gained any knowledge of Peterloo.

She also stressed the importance of the film for modern-day Britain:

For me, this is about remembering the struggle, the heartache and the sacrifice people made in the past, but it is also about holding up a mirror to where we are now. Peterloo tells you the history of that time, but it also shows you: this could happen again. The costumes may be different, but it is the same old battle against authority, it is the constant disregard of working people, the lack of respect, the systematic bullying… You only have to look at the many anti-fracking demonstrations in the north where the police used extreme violence against the protesters to see that.

I think the film will open people’s eyes… People want change now, like they did then. I still believe that unity is strength. There is still power in mass demonstrations; we must never forget that.

Leigh insists that the Peterloo Massacre was “a defining moment in our political history”. For that reason, and more, we should always keep it present. And we should never forget.

– For information on where you can watch the film, see here.