The ‘Press Club’ regrets welcoming an independent journalist. He demolished the media to its face. - Canary 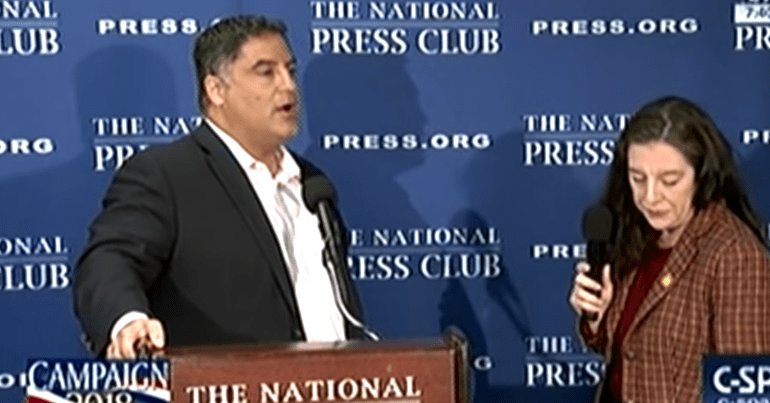 Founder and co-host of independent US media outlet the Young Turks Cenk Uygur recently gave a speech at the National Press Club in Washington. Speaking to mainstream journalists, Uygur demolished the corporate media to its face.

“You will equate the lies and truth”

Among a number of examples of establishment media bias, Uygur said:

If you think you voted for Hillary Clinton and that makes you a progressive, you don’t know what the word is… The Clintons took $3bn from donors over their careers… You know who broke that story, the Washington Post… so credit where credit is due… Unlike the right wing, we don’t want to tear them down – we want to build them up…

Neutrality is not objectivity. So it is the wrong standard. If you call everything 50/50, you will equate the lies and truth. And that gives lies an enormous advantage.

Uygur explained why he thought the media had an “establishment” bias:

Think about how you do coverage. What’s the first thing that the writers write about and they talk about on TV? Who has the most money.

Wait a minute… I’m not impressed if you took the most amount of money from [arms dealer] Northrop Grumman… from Apple, or from any of these companies. That to me says you’re less trustworthy, not more….

But what does every media outlet in this country do – old media? They reward it by giving it coverage…. ‘Hillary Clinton’s leading’… It ain’t good… 93% of Americans believe that the politicians represent their donors and not their voters. Yet here we are in a town that celebrates it. And it’s disgusting.

He also said that there was an upcoming “civil war” between the corporate media and new progressive media over the candidates for the Democratic Party in 2020. And he predicted what the mainstream coverage will be like:

‘It’s their boat, so they don’t want to rock it’

Nowhere in my speech did I say they were lazy… I said they were wrong.

And he offered broad reasons why media outlets like CNN are pro-establishment:

They don’t want to rock the boat. Because it’s their boat.

Edney later challenged the idea that outlets should hire critics of the establishment:

CNN should be in the business of hiring reporters, not politicians

But Uygur pointed out:

The exchange captures the problem at the heart of the mainstream media: that editors cannot always see beyond their worldview. And that worldview informs the value judgements journalists make from the moment they select which story to cover and which stories to leave out. That’s before reporters even begin writing the article, where they choose which information to include.

In short, everybody has bias. And the key to establishing a healthy democracy is ensuring there’s a diversity of media outlets with different political perspectives.

Uygur boldly called out the establishment media straight to its face. Kudos for that.