Brexit financier Arron Banks faces a criminal investigation. And it could be just the beginning. - Canary 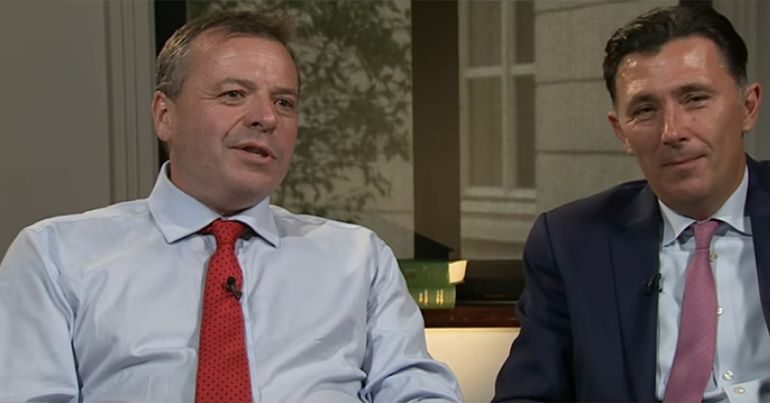 The National Crime Agency (NCA) is investigating the financial affairs of multi-millionaire Arron Banks over his donations to the Leave.EU campaign.

Evidence indicates that such an investigation should not focus entirely on Banks himself, but also include his business associates and their role in wider dealings.

We’ve referred a number of companies and individuals to the National Crime Agency @NCA_UK for suspected criminal offences committed during the EU referendum.

Read our full statement in our press release: https://t.co/6CNyTK1hFl pic.twitter.com/ZujE1qoGVY

Banks donated £2.9m to Leave.EU in addition to a further £5m outside the referendum regulated period. Add in his donations to UKIP and Better for the Country Ltd, and the total comes to £9.6m. Include further donations of services and the figure then rises to £12m.

Leave.EU director of communications Andy Wigmore has asserted that Banks bankrolled the Brexit campaign group from the sale of his then NewLaw Legal company. But the Financial Times suggests [paywall] that the sale would only have netted £2m, leaving a substantial shortfall.

However, the main focus [paywall] of the NCA investigation is on the financial dealings of Rock Holdings Ltd, a company based in the Isle of Man.

And if it is shown that this company was the source of some or all of the donations by Banks, then that could count as an illegal overseas donation. A prosecution could then follow.

The latter was previously implicated in the EU referendum scandal. Evidence appears to show that Eldon shared premises with Leave.EU, and that data sharing may also have occurred in contravention of data protection legislation.

Mellon is Banks’ long time business partner and is also chairman of Manx Financial Group. Mellon (who introduced Banks to then UKIP leader and pro-Brexiteer Nigel Farage) has reportedly made hundreds of millions of dollars investing in Russia and elsewhere.

In November 2015, Banks is reported to have emailed Russian businessman Siman Povarenkin about a gold deal offer. He said he had:

passed [on] the presentation [about the offer] to Andrew Umbers of Oakwell Capital, a company that I own a substantial stake in.

But Banks subsequently argued that the offer was never taken up:

No Russian Gold deals, sweet heart or otherwise. A small cabal of anti-Brexit journalists from Ch4, the BBC and Guardian newspaper are engaged in a smear campaign against me.

Banks also told the Commons Digital, Culture, Media and Sports select committee that the gold-mining deal was merely “a proposal” and “doesn’t mean there’s any wrongdoing”.

However, in 2016, a series of 11 meetings between Russian representatives and Leave.EU took place prior to and after the EU referendum. Charlemagne Capital, founded by Mellon (and later rebranded as DeVere) subsequently invested in Alrosa, the Russian diamond mining company. This followed an earlier investment in 2013.

Banks has recently denied all wrong doing via a statement on Twitter:

Statement from @Arron_Banks: "I am pleased that the Electoral Commission has referred me to the National Crime Agency. I am confident that a full and frank investigation will finally put an end to the ludicrous allegations levelled against me and my colleagues." pic.twitter.com/V6fdjk604Z

There now needs to be an open investigation into allegations of a cover-up by Theresa May, when home secretary, into Banks’ business affairs.

Meanwhile, the task the NCA faces in its criminal investigation of Banks is huge, if not daunting. This is particularly so if its brief widens to include Banks’ business associates and linked companies. For it’s likely the NCA is only scratching the surface.

Indeed, a narrowly focussed investigation, or one that takes too long to complete, will serve no purpose at all. Because the stakes are high – for the entire population.

– Read more in The Canary about Arron Banks, Leave.EU, and Brexit.