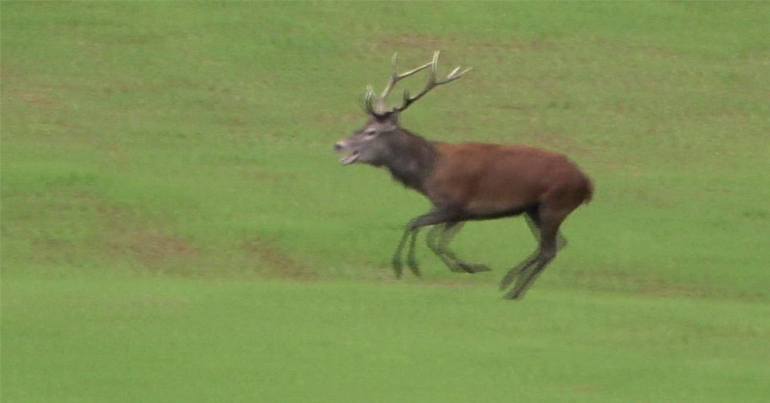 Anti-hunting activists released “shocking footage” of a stag hunt in Somerset on 25 October. It shows a stag cornered by hounds after running across fields. But, due to loopholes in the law, the entire event was legal.

Anti-hunting organisations Hounds Off and Somerset Wildlife Crime filmed the hunt, carried out by the Quantock Stag Hounds. A 30 October press release contains footage from the day. In the video, a stag can be seen running across several fields before trying to hide in some trees. Two hounds ‘mark’ him then give chase as he tries to get away. A member of the hunt runs after the stag with a gun.

The Hunting Act banned hunting with hounds in 2004. Despite this, the video shows a completely legal activity. This is because of two significant loopholes in the law, exploited by the UK’s three stag hound packs. Explaining them, the press release said they are:

The hunt chased the stag “to exhaustion” before killing him, the press release claimed. Speaking of stag hunting tradition, it said:

Hunt followers and riders then gather in the woods for the traditional carve-up, where the body is divided into trophies for people to take away and remember their day.

The Canary asked the Quantock Stag Hounds for comment on this video, but it chose not to provide one.

Intended for scientists, taken up by hunters

Zoologist Jordi Casamitjana, author of stag hunting report ‘Observed’ to Death, explained to The Canary how hunts have exploited the loophole. He said:

Clearly Parliament intended this exemption to prevent scientists to be affected by the ban, allowing them to carry out their studies if they needed dogs to find a wild mammal… But the exemption as written does not specify that they have to be scientists, that the research has to be genuine, or that it should not be lethal. Here is where the hunts came in.

Casamitjana went on to explain the “observation” part only requires a hunter to be looking at a stag when the animal is killed. And the use of two hounds, as seen in the video, is part of the exemption.

The Quantock Stag Hounds were part of a study into stress levels of animals subject to hunting published in 1997. New Scientist said the report by biologist Patrick Bateson found:

levels of [stress hormone] cortisol were around 10 times higher in the deer chased by hounds than in animals shot by stalkers. They were similar to levels in deer badly injured in road accidents.

The ‘Bateson report’ led to the National Trust and Forestry Commission bringing in a ban against stag hunting on their land.

The Burns Inquiry, which led to the Hunting Act, agreed with the Bateson report. It said:

There seems to be a large measure of agreement among the scientists that, at least during the last 20 minutes or so of the hunt, the deer is likely to suffer as glycogen depletion sets in.

Despite this, loopholes in the Hunting Act have allowed the Quantock Stag Hounds and other stag hunting packs to continue.

‘Research and observation’, like the trail hunting and falconry exemption used by other hunts throughout the country, is almost comical in its pretence. But it continues to be exploited so that hunts can continue killing Britain’s largest land mammal.

Labour pledged on 2 November to remove legal loopholes from the Hunting Act if elected. However, it only mentioned the hunting of foxes and hares. So for many, it seems likely that the most effective way to hold hunts to account will continue to be direct action by hunt saboteurs and monitors.

– Support Hounds Off in its work against hunting.

– Read more from The Canary about hunting.