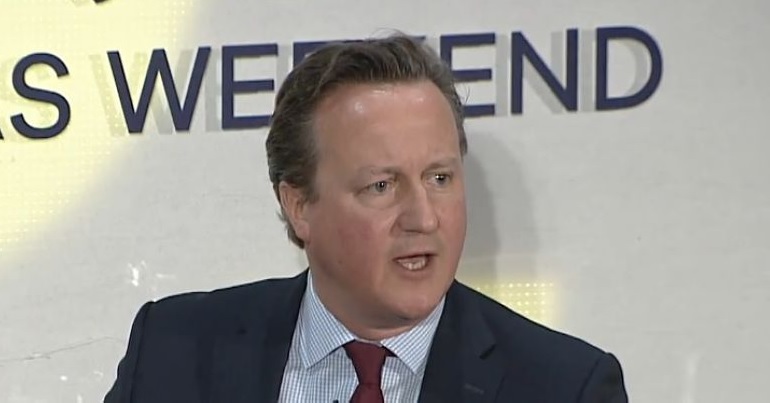 Ex-prime minister David Cameron is feeling “bored shitless”. So, he’s apparently contemplating a return to politics, as foreign secretary no less. At least, he was doing so before the media leaked that information to the public. The resounding, near-unanimous cry of ‘fuck off!’ from British people to the news, may well make Cameron think again though.

Of course, the former PM did ‘fuck off’ once before. Cameron exited politics after the UK voted for Brexit. In an interview earlier this year, Cameron claimed he doesn’t regret calling the EU referendum but that the outcome was wrong. He didn’t though stick around to help the country deal with its “mistake“.

It’s strange then, that some are now backing his possible return by arguing that Cameron’s “dedicated to public service”. This glaring contradiction hasn’t gone by unnoticed:

Dave was also the architect of the vast majority of gruelling austerity cuts inflicted on Britons since 2010. And, as it turns out, research suggests that the main reason people voted for Brexit was austerity. So, Cameron not only called a referendum and abandoned Britain straight after it. His policy choices also helped swing the vote. No wonder then people now think the “bored shitless” ex-politician should spend his time atoning for austerity, rather than returning to politics:

If David Cameron is that 'bored shitless' he could go and volunteer at any of the FOUR foodbanks in his former Witney constituency. Perhaps would serve as some form of reparation for his part in the scale of their need in the first place. ?

If David Cameron is bored maybe he could go help out at a food bank or a night shelter, rather than think yeah Foreign Secretary would be a cool gig.
Overly entitled twit.

There’s also a very popular ‘assessment’ of Cameron’s legacy re-emerging in the wake of the news. Danny Dyer tore into the ex-PM over Brexit on 28 June. During an appearance on Good Evening Britain, the EastEnders actor called Cameron a “twat” for ‘scuttling off’ after the referendum.

Danny Dyer on the @David_Cameron 'legacy' in 30 seconds #GoodEveningBritain pic.twitter.com/3bkgN9M78U

But some people don’t just support the idea that Cameron’s a “twat”. Given the response to a tweet by a famous British war veteran, many also think he’s akin to an incurable sexual disease:

#davidcameron's return to politics would be as welcome as antibiotic resistant gonorrhea. https://t.co/BRzmdhWRPo

Most of all, however, people really did just have two, or three, words for Cameron’s potential new plans:

Just two words for David Cameron if the worst Prime Minister since Neville Chamberlain really wants to return to politics. The second is “off”.

David Cameron wants to be Foreign Secretary in the next Tory government?

The weakest man in Parliamentary history, who drove a permanent wedge down the middle of our country, now wants to be in charge of international relations??

In short, most people balk at the very idea of Cameron getting back into parliament. But, as the man who decimated the country with austerity, handed much of our NHS over to private companies, carried out illegal wars and gave us a lying, cheating Brexit, it’s no surprise people aren’t welcoming him back with open arms.

‘Fuck off’ is right.