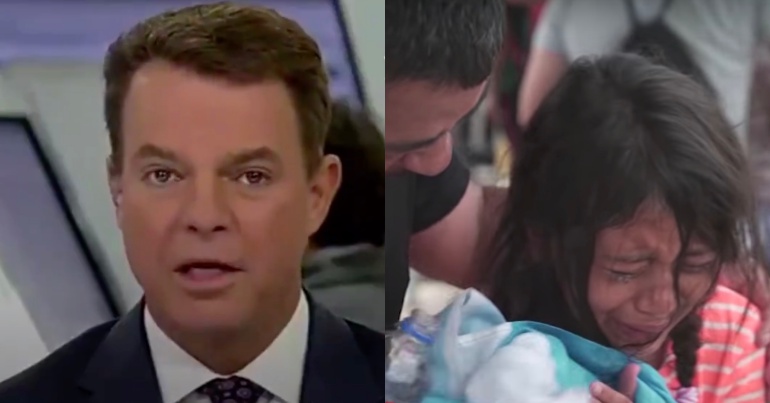 As mid-term elections loom in the US, Donald Trump’s latest vote-grabbing strategy is arguably his most twisted and sickening yet. As thousands of refugees flee to the US from Central America, Trump has threatened to send 15,000 troops to the US-Mexican border. And at the same time, he’s leading a racist fearmongering mission against people who are fleeing extreme violence and poverty in their home countries. In fact, it’s so bad that even a Fox News anchor has spoken out against the blatant lies.

“There is no invasion”

With mid-terms on 6 November, immigration and borders have become a “priority issue” for the administration. Trump’s also seized this crisis to push an increasingly vile and dangerous anti-immigrant rhetoric:

Our military is being mobilized at the Southern Border. Many more troops coming. We will NOT let these Caravans, which are also made up of some very bad thugs and gang members, into the U.S. Our Border is sacred, must come in legally. TURN AROUND!

And where Trump goes, the right-wing press follow. As ever, Fox News led the way:

Leprosy, rabies, HIV, measles, rubella, hepatitis A, influenza, syphilis, smallpox and more: Fox News keeps warning viewers that people in the migrant caravan are coming to infect them and their families https://t.co/ILxUDoFwVB pic.twitter.com/3tTb90mGjQ

But this time, Fox and Trump went too far. So much so that Fox anchor Shep Smith broke ranks and spoke out against the fearmongering, insisting:

There is no invasion… No one’s coming to get you… There’s nothing at all to worry about.

"There is no invasion. No one is coming to get you." –Fox News Anchor Shep Smith pic.twitter.com/IuQ85SVcfK

Women, children and men from Central America have been walking for days now. They say they’re escaping violence and poverty in their home countries. Some are expected to seek asylum in the United States, as prescribed by law.

As The Canary has detailed previously, these refugees are fleeing extreme poverty and violence – conditions very much created by decades of US interference in the region. People originally started travelling from Honduras, for example, which has “suffered some of the worst abuses of US foreign policy”.

The militarisation of the US border

On 29 October, meanwhile, the Pentagon announced the deployment of 5,200 troops to the border. As Newsweek reported, this was fuelled by unfounded “claims of the presence of “unknown Middle Easterners,” terrorists and MS-13 gang members”. These claims are not “supported by intelligence on the ground”. Trump’s administration also received, and reportedly ignored, evidence stating that these troops were not necessary because “only a small percentage” of the refugees would make it to the US anyway.

According to Newsweek, defence secretary James Mattis has authorised troops heading to the border to carry arms and live ammunition. Yet it’s all unnecessary for so many reasons:

President Trump says he plans to send up to 15,000 troops to the U.S.-Mexico border in response to the migrant caravan. Critics are calling it a stunt because:
◾️ Most of them are children
◾️ It will take them months to reach the border
◾️ Many will seek asylum, which is legal pic.twitter.com/BkxWURo7ku

Yet despite Trump’s insistence, recent reports state that the Pentagon has no knowledge of this plan:

Trump’s comments left some in the Pentagon scratching their heads. Officials said they had no plans to deploy as many as 15,000 troops.

“The most racially charged national political ad in 30 years”

On 31 October, the Trump campaign team went a step further, releasing what CNN called the “most racially charged national political ad in 30 years”:

It is outrageous what the Democrats are doing to our Country. Vote Republican now! https://t.co/0pWiwCHGbh pic.twitter.com/2crea9HF7G

It features Luis Bracamontes, a Mexican man convicted of murder in February. “DEMOCRATS LET HIM STAY,” it declares. But this isn’t true. Because Bracamontes was first deported in 1997, but reportedly returned to the US in 2001 under the Bush administration.

This is distracting, divisive Donald at his worst. This is fear mongering…

They have to fear monger and his dog whistle of all dog whistles is immigration. This has been Donald Trump’s playbook for so long.

This latest ad “comes with all the symbolic significance of the presidency itself”. So for a Fox anchor to speak out as Smith did, making the clear link between the timing of Trump’s lies and the mid-terms, speaks volumes.

– Read The Canary‘s previous articles about Honduras and Latin America at The Canary Global.

Featured images via Twitter/screengrab and YouTube/screengrab