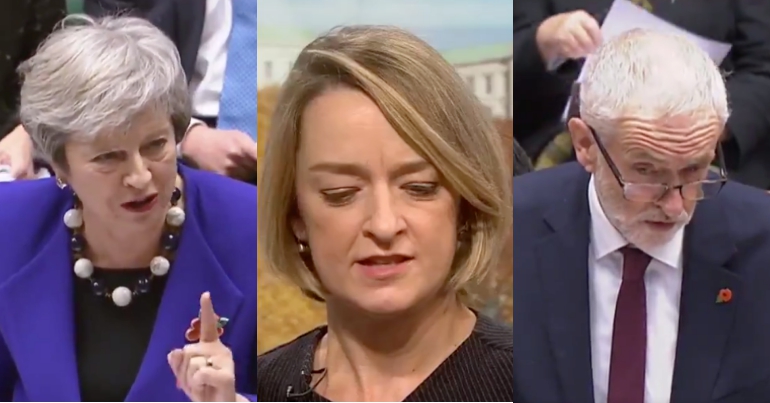 Pretty much every week when parliament is sitting, Prime Minister’s Questions (PMQs) takes place. The concept is a simple one and the clue is in the name. And in case that’s not enough, parliament’s website gives a helpful description:

But somehow, the BBC‘s political editor Laura Kuenssberg spectacularly failed to grasp the concept. Following an exchange between Theresa May and Jeremy Corbyn that ended with May asking Corbyn a question, Kuenssberg tweeted:

Luckily, social media users were on hand to remind Kuenssberg how PMQs works:

This may be difficult for you to understand…it is for the PM to answer questions. #PMQs

If you know any actual journalists, perhaps they could help explain it to you

And just in case there was any doubt:

Although, as others pointed out, it can be a little confusing given May very rarely actually answers a direct question:

I know it's confusing but he isn't quite yet the Prime Minister.

Others couldn’t quite believe it was the BBC‘s political editor making the comment:

As Theresa May ignores one question after another, the BBC’s political editor notes the absence of answers from … the person asking the questions. Incredible. #PMQs https://t.co/YFzesjvV2R

Some people wondered if they’d missed a general election:

Ooh was there a general election that I just missed? Is Corbyn Prime Minister now – I guess he must be if he's supposed to be ANSWERING questions at Prime Ministers QUESTIONS!

But last time The Canary checked, there wasn’t an overnight snap general election. And as Twitter users highlighted, Kuenssberg’s framing is important given May’s lack of answers:

surely the media has to finally comment about May's inability or unwillingness to answer questions during PMQ's?

After all she is still the PM

The BBC's political editor commented on Corbyn not answering questions, forgetting perhaps Corbyn is not PM

It would be nice to have a political system where the apparent leader of the country was questioned each week and responded with coherent and accountable answers. It would also be nice for this occur without the event turning into what shadow education secretary Angel Rayner described as a “pantomime”.

But this isn’t the case. And between May’s refusal to answer questions, the behaviour of her MPs, and this kind of response from media pundits, it’s obvious why so many people are fed up with mainstream establishment politics.