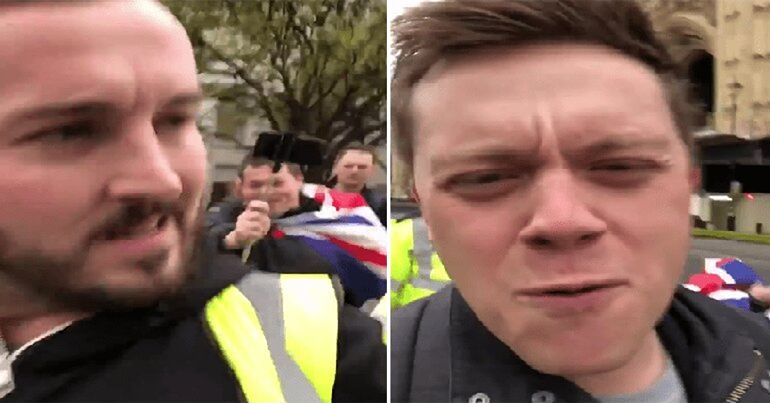 Prominent progressive commentator Owen Jones owned a group of Stephen Yaxley-Lennon (aka Tommy Robinson) supporters who were harassing him on 7 January.

Jones came through with a brutal one-liner:

I’ve got an entire rally. This is almost as big as Tommy Robinson’s rally the other week.

Just met some lovely Tommy Robinson fans and I’d love for you to get to know them too pic.twitter.com/iRom8GavNy

In December, Yaxley-Lennon tried to paint himself as the figurehead of Brexit during a ‘Brexit betrayal’ rally. But organisers of counter-protests claimed they vastly outnumbered it.

Other highlights from Jones included:

I am gonna go home later, have some roast gammon.

The people harassing Jones, meanwhile, didn’t appear to have anything except vitriol. They called Jones a “traitor”. Far-right terrorist and Britain First supporter Thomas Mair, who murdered Labour MP Jo Cox in 2016, gave his name in court as “Death to traitors, freedom for Britain”.

Listen, you are a horrible little liar… You are a disgrace… You are a lying little snake…

I feel sorry for your parents raising someone like you…

You are quite frankly one of the biggest pricks in this country.

He also raised the right-wing smear that Jeremy Corbyn is involved with terrorist groups:

C’mon, let’s talk about Corbyn and the IRA and Hezbollah… Hamas.

During the 2017 election, the Labour leader addressed this misrepresentation on TV, saying:

The damaging smears against Corbyn originate in the corporate media. And that’s a root cause of the harassment Jones is receiving simply for fighting for a just society. Fortunately, Jones made light work of the far-right crowd.