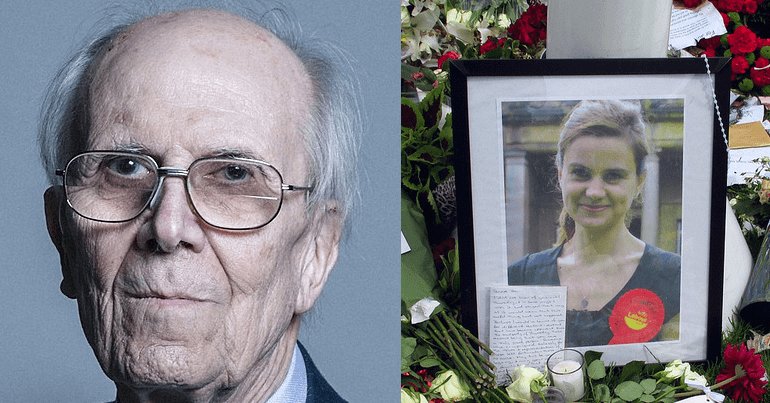 On 16 June 2016, Thomas Mair shouted “Britain First” as he shot and stabbed Labour MP Cox while she was going to meet her constituents in West Yorkshire.

‘An unbalanced man obsessed with the left’

But, during a parliamentary debate on counter-terrorism, Tebbit said that Mair was actually not a “far-right terrorist” but a left-winger. Tebbit came to such a conclusion because Mair was “obsessed” with the Nazis, whom Tebbit claims are left-wing. But just because the Nazis called themselves the ‘National Socialist German Workers’ Party’ doesn’t mean they were socialist. Just like the North Korean ‘Democratic People’s Republic of Korea’ is hardly democratic.

The Nazis branded themselves as socialists to try and poach supporters from popular socialist and communist groups at the time. In other words, Tebbit is parading Nazi propaganda in parliament to score political points over the murder of a Labour MP.

Tebbit, who was a prominent minister during Margaret Thatcher’s premiership, said:

He was an unbalanced man who was obsessed with the Nazis, the National Socialist German Workers’ Party—a left-wing party

Hitler & his Deutcher Arbeiter Partei mates see this and decide that they need to steal support from actual socialists, @StillGray… pic.twitter.com/Fq9ylQcch7

Stuchbery then points out the Nazis essentially ran a “corporate cartel base”, and contrasts that to the “actual socialists”:

So, if you're peddling this 'munuhmunuh NAZIS ARE SOCIALISTS' bullshit you're either massively dense or an evil prick.

“What is this right-wing extremism?”

Tebbit went on to suggest that “right-wing extremism” doesn’t exist:

What is this right-wing extremism? Is it people who want to reduce taxes and have smaller government and greater liberty?

The House of Lords member doesn’t seem to live in reality. Only last week, thugs left a prospective Labour council candidate bloodied and concussed for five days because of her politics. They called young mum Jade Unal a “Labour c***” while they beat her after she left a Labour talk on Brexit.

In 2016, Mair murdered Cox for her politics. She was a campaigner for the rights of refugees. Yet Tebbit is invoking Nazi propaganda to make political capital over her memory. Hang your head in shame, Lord Tebbit.