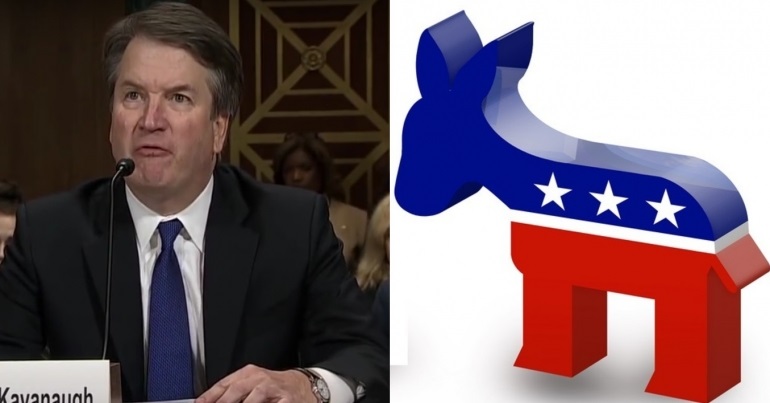 The US Senate has appointed a right-wing, reactionary hack to the US Supreme Court (USSC) following a vote of 50-48. But it’s time for some introspection for anyone who looks to the Democratic Party as the ‘resistance’ to Donald Trump’s government. Because the Democrats could have fought tooth and nail to prevent Brett Kavanaugh from filling the space left by Justice Kennedy’s resignation. They were right to focus energy on the sexual assault allegations against Kavanaugh, of course, but they failed miserably to focus on Kavanaugh’s corporatism – something that could have prevented his appointment.

Eminent US lawyer and consumer rights advocate Ralph Nader described Kavanaugh as “a corporation masquerading as a judge”.

Public interest groups Public Citizen and Alliance for Justice paint a picture of a man dedicated to representing the rich and powerful. Kavanaugh’s judicial record and legal writings show he is viscerally opposed to workers’ rights, consumer protections, environmental protections, net neutrality, and restricting monopoly practices of major corporations; and the list goes on.

Public Citizen wrote that, as a US Court of Appeal judge, Kavanaugh:

Sided with corporations 87 Percent of the time in split decisions in key areas.

Or as Nader put it:

With Kavanaugh, it is all about siding with corporations over workers, consumers, patients, motorists, the poor, minority voters, and beleaguered communities.

A supporter of an ‘imperial presidency’

The former president of the National Lawyers Guild, Marjorie Cohn, has detailed how – in nearly all of Kavanaugh’s decisions relating to the so-called ‘war on terror’ – he:

demonstrated nothing but disdain for international law and an uncritical deference to executive power.

In 2014, Kavanaugh wrote that a US president should be able to ignore laws he ‘deems unconstitutional’ until “a final court order says otherwise”.

Kavanaugh would create a dangerous presumption in favor of a president who refuses to follow the law.

Republicans and Democrats: two wings of the same oligarchy

the Democrats are more interested in defense of this whole system of the architecture the Supreme Court, and they’re so worried about people’s respect for the Supreme Court. Why? The Supreme Court, in a totally partisan 5-4 vote in the year 2000, essentially helped participate in an electoral fraud. Elected George Bush, took it away from Al Gore. That’s the Supreme Court we’re talking about. But let’s also talk about at some point how come Al Gore doesn’t fight. Because there is a pattern here. When it really comes to really revealing the real nature of these institutions and the nature of the system, and the nature of how the oligarchy rules through these political institutions, the Dems always pull back.

Just hours after the deal was reported, all seven judges were confirmed, with the help of some Democrats.

Because these judges—selected with the help of the right-wing Federalist Society—are relatively young, they are now in a position to shape American law for decades to come, threatening the planet, workers, and women’s reproductive rights.

In July, Schumer openly refused to “deploy the whip” to prevent Kavanaugh’s appointment. Perhaps even more shocking, Tom Perez – the head of the Democratic National Committee (DNC) – said that the DNC would continue to back Democrats even if they voted to confirm Kavanaugh. West Virginia Democrat senator Joe Manchin, meanwhile, actually voted for Kavanaugh.

At the same time, let’s remember that former president Barack Obama and former attorney general Eric Holder strongly backed Perez for DNC chair over the more progressive Keith Ellison. Democrats even failed to back Vermont senator Bernie Sanders’s call for a perjury investigation, even though there is enough evidence to support one.

To top it all off, the Democrats’ leader in the US House of Representatives – millionaire Nancy Pelosi – confirmed that she opposes any possible impeachment of Kavanaugh.

Democrats are part of the problem. Remember that.

Kavanaugh is a truly retrograde choice in every sense of the word. The Democratic Party, however, had months to educate the US population about his horrible track record of serving power. It could have built a united front for a jurist who doesn’t serve the corporate state as slavishly as Kavanaugh. But it didn’t.

The Democrats are not the resistance they claim to be. It’s time for progressives to accept that and build an alternative.

– Support independent journalism at The Canary; please share our articles and join us if you can.