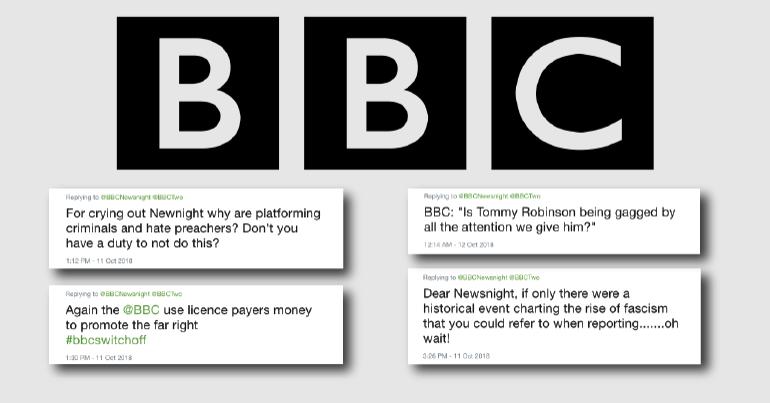 BBC Newsnight has come under fire for ‘legitimising’ the far right by tweeting the question:

Is Tommy Robinson a man raising concerns that others ignore, or a far-right figure exploiting the victims of sexual abuse for his own ends?

While some have praised the BBC‘s journalism, others have criticised the Newsnight segment looking at Stephen Yaxley-Lennon (aka Tommy Robinson).

The segment featured a report on grooming, and also had a discussion on Yaxley-Lennon with Guardian columnist Nesrine Malik and newspaper publisher Danny Lockwood.

But many viewers were unimpressed:

His name is Stephen Yaxley-Lennon. He's a convicted fraudster, a thug, & a peddler of hate who has nothing of value to contribute to any debate. The photo you use implies he's being silenced when in fact he's constantly being given a platform by the media https://t.co/yMuAHtY8t0

*Worth noting there were many good points made by:
– Sammy Woodhouse: survivors exposed the issue
– Will Baldet: far-right are being anti-Muslim
– Point that Anjem C i.e. media playing a role in allowing him to radicalise the far right
– Nesrine Malik (see above)

Newsnight‘s tweet asked if we should take Yaxley-Lennon at his word. A lot of people were annoyed by this. They thought we should have moved beyond questioning Yaxley-Lennon’s intentions:

Examination? Yes. Debate? No. His views are well-documented. Legitimising them by having him repeat them in person serves no purpose other than helping to mainstream them. You wouldn’t have Peter Sutcliffe on the show to debate his views on sex workers, would you?

Others were also very angry that he’d been given yet more airtime: 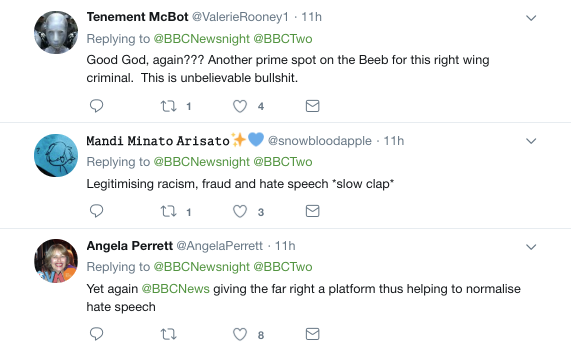 And they had a point. The question posed did suggest Yaxley-Lennon’s intentions were up for debate. Using the picture of him gagged also played into the image he presents of himself:

The tape over the mouth signifies how Tommy Robinson is being silenced by…eh…having a big chunk of a tv programme devoted to him. https://t.co/SkTfmeOmHQ

And the far right claiming to be silenced is nothing new: 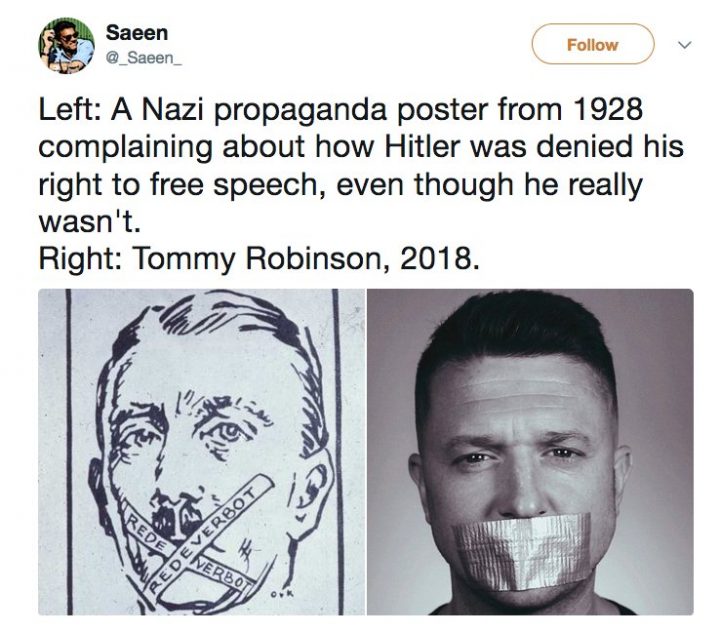 The Newsnight discussion saw Malik arguing that Yaxley-Lennon is an ‘opportunist’:

"Tommy Robinson is an opportunist, he did not have a lot of interest in the grooming gang story before it became mainstream," journalist Nasrine Malik on Tommy Robinson @NesrineMalik | #newsnight pic.twitter.com/P9GiqERL0b

Some who watched the programme had positive things to say about it:

A very good report on Stephen Yaxley Lennon, the movement currently behind him and an honest and frank interview with one of the victims of the #GroomingGangs. #TommyRobinson #FarRighthttps://t.co/T7Gf4IEiBM

Good point raised that Tommy Robinson is selective in what cases he picks, as Sally Woodhouse points out that more of the abusers are white (including hers). #Newsnight

The BBC Newsnight show tonight was good, lots of good points. Sammy Woodhouse was brilliant, correctly identifying that Tommy Robinson is just using child sex abuse for his own anti-Muslim agenda. Listen carefully to what she says.

The Newsnight piece has drawn another criticism, though:

Will you @BBCNewsnight stop trying to palm off commentators as being legitimate to discussion when they have links to Robinson. Is this the best you can do?

This is shabby journalism: https://t.co/GZRMsgABxp

Danny Lockwood was on the Newsnight segment talking about Yaxley-Lennon’s appeal. Lockwood has previously interviewed Yaxley-Lennon, and has drawn criticism for columns he’s written. As the Guardian wrote on 2 September:

Last month alone, Lockwood used his columns to attack a group that monitors anti-Muslim hate incidents – whom he called “soft-headed virtue signallers”; questioned the definition of Islamophobia; and mocked the “Zorro outfits” worn by some Muslim women.

During the Newsnight discussion, Lockwood claimed that:

I don’t think that he speaks specifically to the far right, because they talk to themselves anyway. I think he is tapping into a middle England that sees that they don’t get their views expressed, reflected or given any credence at all.

“He is tapping into a middle England that thinks they don’t get their views reflected or given any credence at all.”

Danny Lockwood from The Press on why some people support Tommy Robinson@danlocky1 | #newsnight pic.twitter.com/D8E5qw67Fv

Lockwood talked about the perspective of unheard middle Englanders. As such, viewers might have been interested to know Lockwood’s opinions are sometimes accused of being in line with Yaxley-Lennon’s. It’s also noteworthy that this talk of voiceless people mirrors Yaxley-Lennon’s propaganda of silenced citizens:

One of the people on Newsnight is Danny Lockwood, who "denied being anti-Muslim" as he maintains "that politicians always pander to the needs of Muslims at the expense of other parts of the community."

The BBC should be more careful that its reporting on the far right doesn’t just amplify their message. It should also be more transparent about the views of commentators like Lockwood.