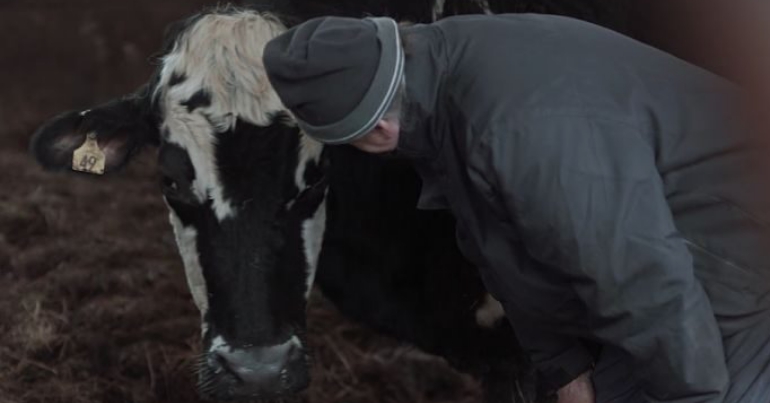 The story of a small English farm’s remarkable courage and compassion is taking film festivals by storm. After recently premiering at the Raindance Film Festival in London, 73 Cows will screen at the Ottawa International Vegan Film Festival on 14 October. It’s also up for an award at the Birmingham Film Festival.

The 15-minute short by Alex Lockwood tells the story of beef farmer Jay Wilde who is struggling with the “soul-destroying” nature of his profession. So, Jay and his partner Katja make the decision to send their 73 cows to a sanctuary, rather than a slaughterhouse, and turn to vegetable farming instead.

Since Lockwood Film released the video online on 5 October, over 50,000 people have watched it. Jay and Katja’s powerful testimony, their extraordinary courage in upending their lives, and Lockwood’s emotive filmmaking explain why it’s gaining such traction.

Jay essentially ended up in the beef farming trade because that’s what his father did. In the movie, he explains what led him to eventually rejecting it:

I began to sort of feel conscious of the fact that the animals had feelings… You realise that they do have personalities and they experience the world… I couldn’t sort of disconnect that feeling of having to get the job done from the fact that they were individuals rather than just… units of production.

Jay also speaks about his feelings when sending the cows to slaughter. He says he felt like he was “betraying” them, knowing he was taking them to “what must be a terrifying experience”. He adds, “it was soul destroying, that’s how it felt”. 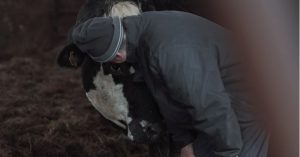 Katja joined Jay on the farm in 2006. Initially, she came as a student but stayed on to help change the farm into “something that would not involve taking animals to the abattoir”. That change has now happened. Although not an easy road, they have turned the farm into one that yields vegan organic vegetables rather than animal products. The cows are now living out their days at the Hillside Animal Sanctuary in Norfolk. 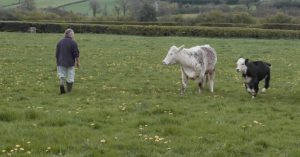 Lockwood hopes the film will draw attention to their immense efforts so far and encourage ongoing support for their new initiative. He told Plant Based News:

In my opinion, the more exposure Jay and Katja can get, the better, as they are in the process of transitioning to vegan farming and it’s not without its challenges. What they have done is incredibly brave, and it would be wonderful if they could get as much support as possible to start something amazing.

He also hopes 73 Cows will provoke change in others too:

If people watch the film and decide that they want to make a change in how they consume animal products then that would be amazing.

Lockwood Film has produced 73 Cows at an extremely apt time. Within days of its release, researchers published a study on the food system’s environmental impact. Led by Oxford University, the research concluded that we need to overhaul our diets, particularly in the West, to stop global warning reaching over 2°C. As a recent UN report showed, we are in serious danger of reaching this catastrophic level of global warming right now. The study says that people around the world need to eat 90% less pork and half as many eggs. It also says beef consumption needs to fall by 75% globally – 90% for those living in the UK and US. Furthermore, people need to dramatically lower the amount of dairy they consume.

The researchers are calling for these changes because of the environmental damage animal products cause through greenhouse gases, pollution, deforestation and water use. As Jay and Katja’s story shows though, there’s also a case based on compassion for rejecting the notion of animals as products.

In short, whichever way you look at it, removing animal ‘products’ from our lives is the answer. It will save us. It will save animals. We will be indulging our better natures – compassion – whilst also protecting ourselves. Some will fight it. Not least, many in the farming community. Its union has already suggested that one ‘fix’ is to effectively create a eugenics programme, whereby the industry works to only breed cows which release less methane through farting. Who knows what horrors that system would force cows to endure?

That’s not the answer. We already know what the solution is. It’s the one Jay, Katja and multiple institutions have now laid out as clear as day.

– Support Hillside Animal Sanctuary which has rescued thousands of animals.