The #MeToo movement is now taking India by storm, and we should all take notice - The Canary 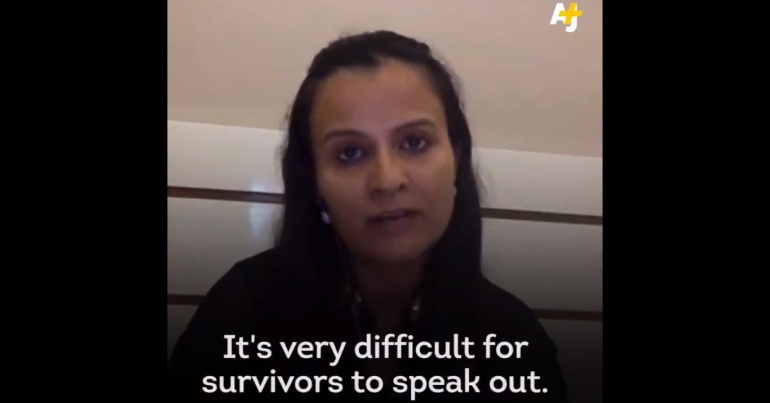 #MeToo has taken off in India – in a big way. The movement against sexual assault, which initially started in the US, has made waves internationally. It’s become a global movement where women are standing with other women, in a solidarity that transcends borders. Now, it’s time for Indian women to have a turn. And for the whole world should take notice – because #MeToo is becoming an international tool for women to say ‘enough is enough’.

Particularly after Brett Kavanaugh’s Supreme Court hearing in the US, #MeToo gained considerable momentum internationally. And it snowballed on Twitter after Indian women in journalism, media and politics started sharing stories of sexual harassment and assault at the hands of male colleagues:

Many of the allegations are against men who hold great influence and power. So it’s no surprise that victims felt unable to come forward sooner. And even if they did, their complaints went unheard:

I was sexually harassed and threatened by the then Director Vigilance Alok Puri for raising my voice against land mafia in the state. I even complained to State Vigilance Commission, but to no avail: SDPO Railways Jammu Dy SP Shashi Thakur #metoo pic.twitter.com/rmEqCQavxu

Hat tip to Rupen Deol Bajaj who made a brave noise about her bottom being pinched – molestation under the law- and got attacked and never heard because the perpetrator was a super cop KPS Gill whom not one eminent citizen was ready to condemn. She is awaiting her #MeToo

Survivors have also made allegations against several prominent members of the ruling Bharatiya Janata Party (BJP). But prime minister Narendra Modi has failed to comment:

When the ruling party is full of leaders involved in crimes against women,
how can India's women and girl children ever feel safe?

The movement has also significantly affected the Indian film industry, and allegations show no sign of slowing down. Several prominent actors, singers, producers, and directors have had allegations levelled against them:

Today filed a complain in Oshiwara police station, in connection with 2008 movie set incident against Nana Patekar and Ganesh Acharya.

#MeTooIndia: Everyone knows about the senior actor who forces young actresses to sleep with him. And the casting director, who refuses to record any struggler’s audition unless she takes her top off. But will Bollywood finally talk about its real villains? https://t.co/yqLtw2dobU

Others, meanwhile, have come out in support of the victims – refusing to work with those facing accusations:

It’s also worth noting that the movement has empowered Indian women from all walks of life to share their stories:

#MeToo Women gets harassed at every place despite her age,her work.
The only question i would like to raise is WHEN IT WILL STOP ? pic.twitter.com/HmWuhDq9re

Things I've heard from my Indian colleagues abt #MeToo in the last 24 hrs:
1. This is why we try to avoid hiring women in our office
2. By doing this, women are reducing their own career options
3. The fat & ugly ones complain more
Fuck. You. All. To. Hell. #TimesUp #MeTooIndia

Hat tip to Bhanwari Devi whose fight against gang rape in a village in Rajasthan gave us today's Sexual Harassment guidelines. She was raped for stopping the marriage of a one year old ; father of the child was among the rapists. She is still fighting for justice and her #MeToo

Even women from the Dalit community, formerly known as India’s ‘untouchable’ caste, are speaking out:

But can we also talk about how ALL women have value? Can we talk about how easy it has been for savarna feminists to discount the efforts of Dalit women (Raya’s LoSHA that essentially sparked off #MeTooIndia) as witch hunts?https://t.co/PNgp7tQ6pj

While critics of #MeToo in India abound, there is a marked spirit of solidarity with victims and survivors:

A long cultivated culture of silence has been broken by a brave women. What stands out this time is that she is not alone. A collective of voices is coming forth to Speak Up. May we all stand united. #MeToo #MeTooIndia #TimesUp #BelieveWomen https://t.co/pfwnHwHcbj

If you are a parent (especially of a girl child), you shud thank the women sharing their #MeTooIndia experiences. They are recounting gut-wrenching stories, reliving horror so your kids don't face the humiliation they had to suffer. Thank them, support them, don't mock or vilify.

What’s more, women are coming together and mobilising to support one another:

Here is the list of resources if you need any help/support. It is a difficult time for us all and we're thankful for these individuals/orgs for their support. However, we haven't been able to verify the authenticity of all information shared here. https://t.co/bZwQfkneEC

We're chronicling a watershed moment in India's equal rights movement. As #MeTooIndia gains wings, those who've outed their predators and are fearing backlash, here's a list of legal resources. These lawyers have signed up for pro bono work. https://t.co/wQiw3twC3q

What started as a calling out of prominent male figures in journalism, politics, business, Bollywood, and further afield has now become an outcry for women all over India.

#MeToo may not signal the end of sexual harassment or assault, but it is definitely a start.

– Also support The Canary if you appreciate the work we do.