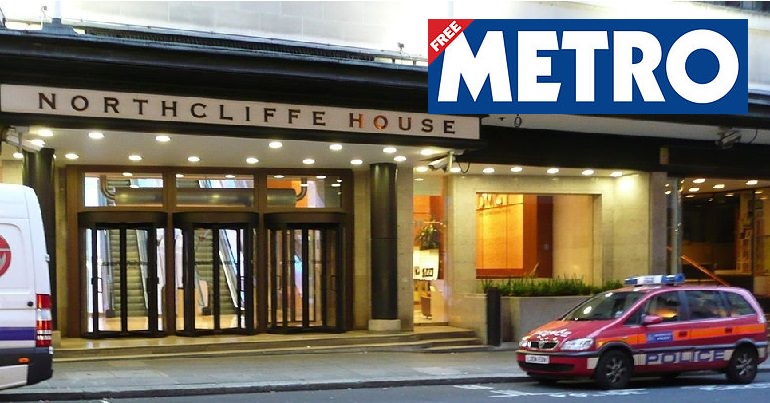 Protesters are planning a picket of the Metro‘s HQ on 19 October. The Metro is owned by the Daily Mail‘s parent company.

The picket is in response to allegations that the Metro has recently published transphobic adverts and articles.

Organisers of the picket claim:

The Metro paper, run by the Daily Mail, has sparked outrage over the past week with their transphobia. This includes media coverage demonizing trans people, and in particular, trans women as well as running an ad campaign for the hate group, ‘Fair Play for Women’.

Fair Play for Women is a campaign group opposed to proposed changes to the Gender Recognition Act. Changes under discussion would make it easier for trans people to have their gender legally recognised.

People have taken issue with an advert that described trans women as “male-bodied” and “adult males”. A feature in Vice argued:

Apparently oblivious to the fact that traveling public might not want to have their intelligence insulted or their gender denied on their morning commute, yesterday the Metro newspaper ran a full page advert from campaign group ‘Fair Play for Women’, which has been blasted by critics as ‘anti-trans propaganda’.

Fair Play for Women has said again and again that it wants to discuss issues around the Gender Recognition Act and trans people have engaged with that on numerous occasions but this is not debate, this is propaganda.

It was wrong to demonise gay people in the 1980s by comparing them to paedophiles and citing 'concern' for children's safety. And it's wrong to demonise trans people in 2018. Shame on @Metro for publishing this fear-mongering and vile anti-trans propaganda https://t.co/Kfr8vjuWVJ

But it isn’t just the advert people have a problem with. They’ve also criticised the Metro for a recent front page:

People on Twitter strongly condemned the front page. One described the newspaper as “garbage”:

Metro Newspaper following up recent transphobic compliance controversy by front paging a trans crime and questioning their trans identity, means that we can finally conclude that Metro is absolute garbage https://t.co/uxzlnLIEss

.@MetroUK's front page today is some hyper-depressing transphobic bullshit. These scare stories looked bad in the 1980s and they look bad today.

The picket comes at a time when transphobia is widespread in the UK. Research suggests that in 2017, more than a third of transgender people experienced hate crime.

Given the extent of transphobia in the UK, it’s no wonder people are concerned about the content of newspapers like the Metro. And on 19 October, people will be showing the full extent of their anger.

– Join the picket outside the Daily Mail HQ.