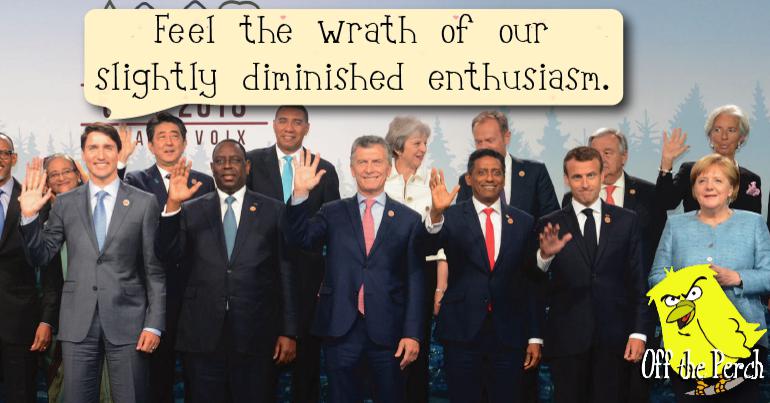 Saudi Arabia is accused of murdering a Washington Post journalist (it’s also killed a lot of other people in that war it’s doing in Yemen). As a result, the West has finally stood up and said:

We vow to carry on selling arms to Saudi (but in a slightly less polite fashion than before).

The countries who sell arms to Saudi Arabia laid out how the country will be punished:

When Saudi comes to pick up its weapons, we will no longer roll out the red carpet. The carpet we’ll use instead will be a very dark shade of orange. Some people think it’s light red, but we’ve had Dulux confirm otherwise.

Justin Trudeau confirmed that Canada will still be selling arms to Saudi Arabia, but that:

The munitions Canada supplies will be decorated with rainbow flags and messages like ‘Womens’ Rights are Cool!’ That way the marginalised Yemenis murdered with our weapons will know we’re on their side.

Theresa May got tough:

Murdering and dismembering journalists goes against Conservative values. Unfortunately, so does turning down money, so we’re in a bit of a bind.

I wasn’t blown away by the live-action Aladdin trailer either, but the people of Agrabah need missiles.

There is no circumstance in which we will stop selling you weapons.