The Department for Work and Pensions (DWP) is starting to face the wrath of local Labour parties. Meanwhile, the Labour leadership appears to be in chaos over it. Is a showdown looming?

The DWP: under pressure

On 10 October, the Consett branch of north west Durham Constituency Labour Party (CLP) passed a motion on Universal Credit. It called for its CLP to support it in calling for the national party to make scrapping Universal Credit policy:

Greater Consett Branch passed an emergency motion on Weds following comments made by Shadow Chancellor John McDonnell to #ScrapUniversalCredit. The motion calls for a manifesto commitment to #ScrapUC. It will be put to our AMM in November to be considered by the whole CLP. pic.twitter.com/KYra7OQVro

Universal Credit has reached a point where it is so fundamentally flawed, it cannot be fixed. It is seeing people from all cross sections of society… forced into poverty, financial hardship and debt.

Labour must propose a radical ethical alternative social security system that truly works in the interest of claimants. My hope is that momentum can continue to be gathered around this issue following the comments of John McDonnell. I hope Labour will adopt a manifesto commitment to scrap Universal Credit.

I have approached other CLP’s to put similar motions forward so that we can collectively campaign to scrap it. We must be the party standing up for the whole of society.

But the party machinery and leadership appears to be in chaos on the issue.

Chaos at the top

As The Canary previously reported, campaigners have been putting pressure on Labour to drop its ‘pause and fix‘ stance on Universal Credit. Shadow chancellor John McDonnell hinted during a Sky News interview that scrapping it may become policy. But Disability News Service (DNS) has since reported that a party spokesperson told it:

that the benefit system was ‘clearly failing in its current form’.

Instead of committing to scrapping universal credit, she said that Labour wanted ‘a root-and-branch review of the social security system’…

When DNS asked for further clarity… the party’s press office produced another statement, which said that universal credit was ‘failing in its current form’.

But this position of a “root-and-branch review” shows there’s been little movement on welfare policy from Labour’s 2017 manifesto. Because that made similar, vague pledges on welfare. It specifically said:

Labour will reform and redesign… [Universal Credit], ending six-week delays in payment and the ‘rape clause’.

This chaos is unacceptable for many campaigners and claimants. Meanwhile, as of 13 October, Labour’s website still had ‘pause and fix’ as its official stance. Also, Jeremy Corbyn added to the confusion further on Twitter:

The Tories’ Universal Credit is pushing families into poverty.

They need to halt the roll-out now to stop it causing more suffering.

The petition itself called on the Tories to ‘urgently stop’ the Universal Credit roll out. But it didn’t say what else it wanted them to do: 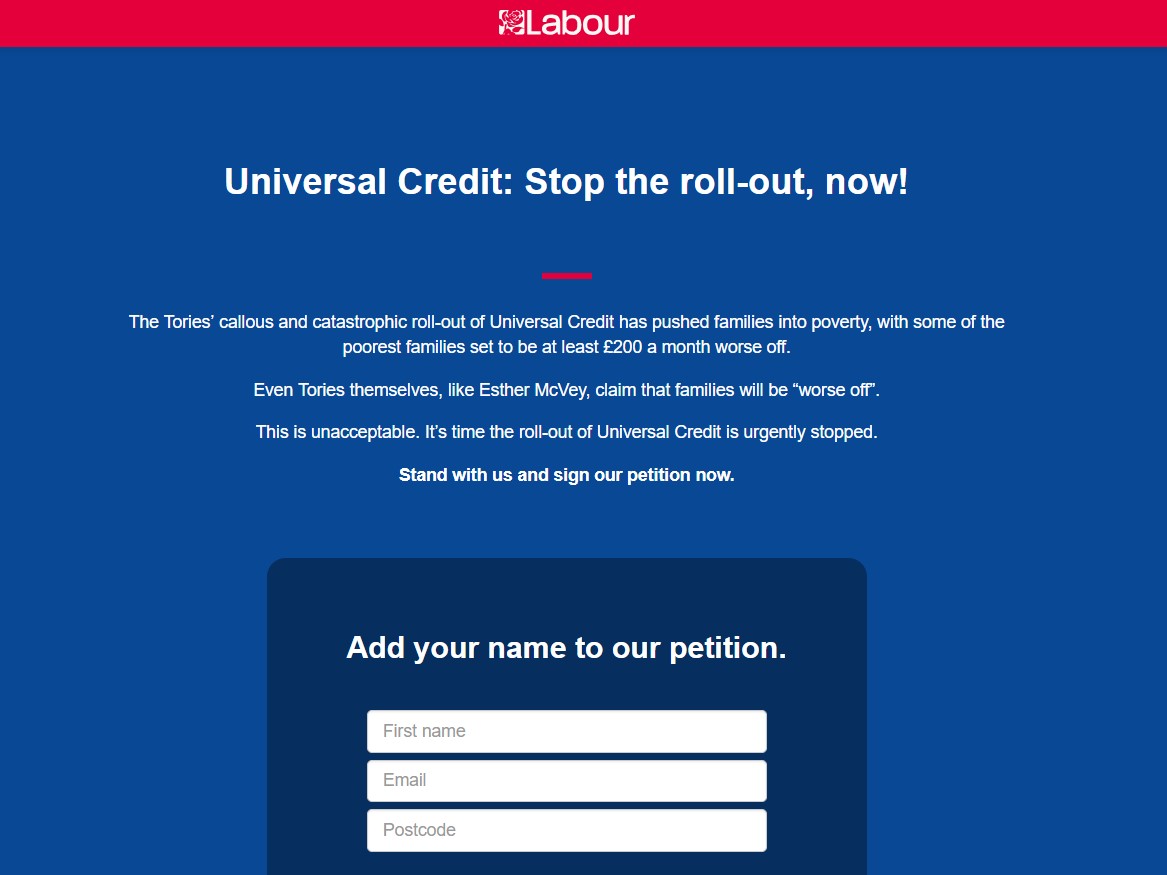 The Labour leadership need to get control of this situation and quickly. Claimants are increasingly anxious, angry, and frustrated over its flip-flopping. If it truly is the party of ‘social justice‘, it needs to start behaving like it.

Featured image via the Telegraph – YouTube and UK government – Wikimedia