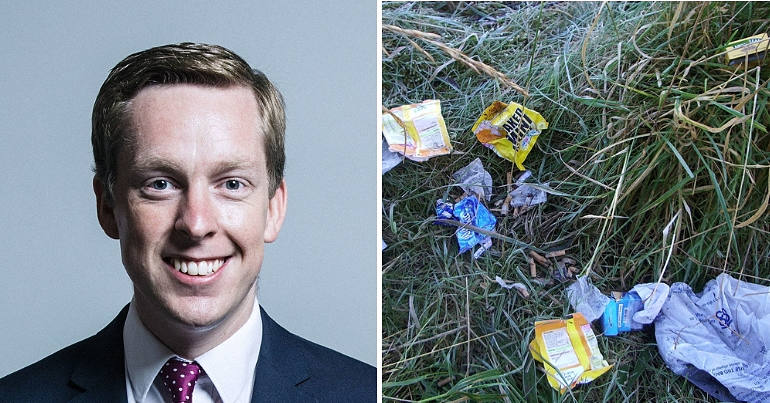 Many are worried about the recent Intergovernmental Panel on Climate Change (IPCC) report on climate change. But, in a recent appearance, the Conservative vice chairman for youth suggested the answer to the momentous environmental challenge we face lies largely with individuals. He says we all need to take personal responsibility for picking up litter, amongst other ‘solutions’.

The IPCC warned on 8 October that if we are to limit global warming to 1.5C, global emissions will need to fall by around 45% from 2010 levels by 2030. Beyond 1.5C, there is a higher risk of droughts and heavy rain. There will also be more heat-related deaths, and a higher risk of malaria.

The UN said recently that the number of ‘extreme climate-related disasters’ has doubled since the 1990s. These events are a major contributor to world hunger.

But Tom Pursglove, Conservative MP for Corby and East Northants and vice chairman for youth of the Conservative Party, appears optimistic. Speaking on October 12 to a BBC Any Questions audience made up entirely of young people, he said government has a “big role” in leaving the environment in a “better state than we found it in”. He also listed action the government is taking:

But noticeably, he completely failed to use the words ‘climate change’ in his answer. Instead, Pursglove talked about successes in banning microbeads and bringing in a plastic bag tax. And he said that there was a large element of “personal responsibility” in the decisions we make as consumers.

“Personal responsibility” – just not for Pursglove

Are you on for all of that in your own life?

A recent report said that people in the UK need to reduce their beef consumption by 90% if we are to avoid climate breakdown. But Pursglove seemingly isn’t willing to take “personal responsibility” in this area of his own life. He replied:

I think that me cutting meat out of my diet would be quite an interesting proposition.

He went on to mention other people’s “personal responsibility” again though, and gave the issue of dropping litter as an example:

it costs a billion pounds a year…we spend clearing litter up. That’s a personal choice that people have. It’s bad for the environment, it’s money that we could spend on our own public services, so I think people just need to be responsible.

It should come as no surprise that Pursglove failed to adequately address the need for radical government action on climate change. In an interview with the Huffington Post in 2015, he said that he would like to abolish the Department of Energy and Climate Change, and that:

I am open minded on man-made climate change. I think there have clearly been historically cycles in global temperatures over time. But I also have no doubt the things that we’ve done as human beings on this planet are probably not helping us.

He has also voted repeatedly against measures to tackle climate change.

In the same week as the IPCC report, the High Court gave the go-ahead for fracking to start in Lancashire – the first fracking operation in seven years in Britain. And far from considering fracking part of the climate problem, the government is trying to accelerate it. There’s a consultation underway on whether it should no longer need planning permission.

Theresa May claims that her government is committed to tackling climate change. The actions of the government suggest, however, that it’s far from a priority. The government is not only supporting fracking, but it’s scrapping subsidies for solar panels and ending grants towards electric cars. Environment secretary Michael Gove didn’t even manage to attend an EU climate change summit the day after the IPCC issued its report.

And as far as Pursglove is concerned, with the government’s 25 year plan, fewer plastic bags and less littering, all will be well. If only it were so simple.

– Read our other articles about climate change

– Support Frack Off, and find out what’s happening in your area.