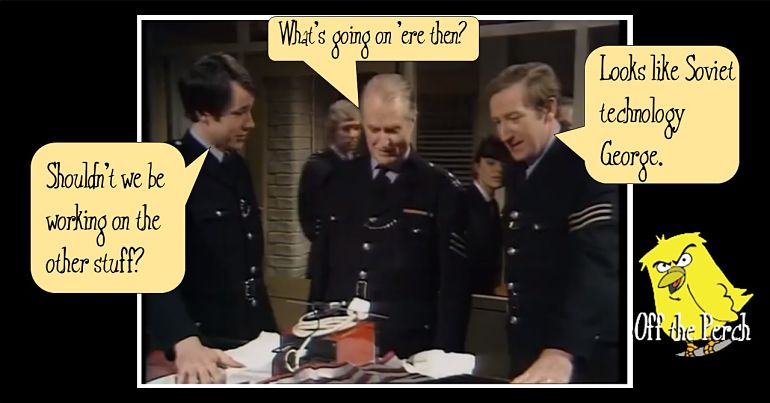 Pretty much everyone knows that the 2016 EU referendum was bent as a nine-bob note. But of course, part of living in the home of democracy, justice, cricket etc is a belief in due process. This means that, much as we might like to put Nigel Farage, Arron Banks and their somehow-even-slimier minions in the stocks, we can’t do so unless they’re found guilty of something. We can’t even fling veg at Michael Gove or Boris Johnson, or Gisela Stuart or Kate Hoey. Unbelievably, chaining up David Cameron and George Osborne and then wiping them with ham would also be unlawful, in the absence of a legally watertight ruling that they deliberately bollocksed the country for a dare.

But now, Off The Perch understands there’s something of a speed bump on the road towards justice. A ‘sleeping policeman’, if you will.

The word on the inside

Terry Chestnuts (not his real name) works in the valeting team at the Met’s vehicle depot. He told us:

The patrol cars often call in after some drunk’s lost his breakfast in the back seat. While I’m hoovering out the footwell, the officers sit in the front shouting about all sorts. Chances are, I’ve got a better idea of what’s going on in the Met than the commissioner has.

Chestnuts explained that London’s coppers are all talking about the investigation into Leave.EU and Vote Leave:

So of course this should have been top priority. Get the best brains on it. Fraud squad, that sort of thing. But that lot charge top coin. And with all the cuts, the Met can only afford to use its top people for the most important stuff, like investigating people who investigate the police. So the Leave job has gone down the food chain. It turns out the TV Theft Unit has been sitting on its arse doing nothing for five years. No one nicks tellies anymore cos it’s easier to wait for Black Friday and get one for twenty quid. But the unit’s a hangover from the days when running down an alley carrying thirty kilos of cathode ray tube was a good way to impress your mates.

Ken Chisel from the Institute of Criticism was surprisingly positive about the TV Theft Unit’s role in the probe:

Who could be better for the job than a bunch of old Gene Hunt-alikes who are used to dealing with shady back-alley characters who’d happily steal your TV from your back window and then sell it to you at your front door? If anyone’s going to get the measure of the Leave mob, it’s them. There is, though, a concern that handing the case to such an obsolete and underfunded team could be a way of kicking the thing into the long grass.