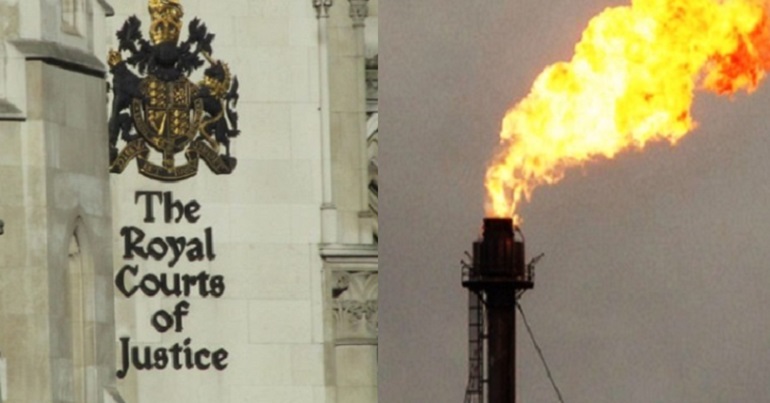 This article was updated at 4:25pm on Friday 12 October to reflect an error. It originally stated that police “dragged” Jonathan Bartley away from the Preston New Road site; this actually happened at Kirby Misperton in North Yorkshire.

The high court has effectively just given the green light for a corporation to trample over local residents and democracy. Moreover, it sets in motion a worrying new phase in the climate crisis. Because the company involved will start its operations within hours.

Lancashire versus the frackers

In July, the government officially gave Cuadrilla the go-ahead to start extracting shale gas or frack properly. The decision was met by more protests from locals. Then, Cuadrilla was stopped in its tracks by a legal challenge from local resident Bob Dennett.

As the Lancashire Telegraph reported, he argued that the local council’s “emergency response planning and procedures” at the site were not good enough.

But on Friday 12 October, the high court threw Dennett’s case out. He also refused to allow a judicial review into Cuadrilla’s operations. Justice Supperstone said there was “no evidence” to back up Dennett’s arguments:

The claimant first has to establish that there is a serious issue to be tried.

Cuadrilla’s chief executive Francis Egan said in a statement to The Canary:

We are delighted to be starting our hydraulic fracturing operations as planned. We are now commencing the final operational phase to evaluate the commercial potential for a new source of indigenous natural gas in Lancashire. If commercially recoverable this will displace costly imported gas, with lower emissions, significant economic benefit and better security of energy supply for the UK.

The hydraulic fracturing process will take approximately three months to complete for both horizontal exploration wells. Cuadrilla will then test the flow of natural gas from those two wells with initial results expected in the New Year.

The Canary understands that Cuadrilla will start drilling on Saturday 13 October.

The court decision is hugely disappointing. Our local councillors have been demanding information about emergency procedures for months now and fracking is about to begin at the site.

The case was all about the failure of Lancashire County Council to provide adequate emergency evacuation procedures, and have public consultation and communication into civil contingency plans in the event of an explosion or gas leak at the Preston New Road fracking site.

Given that an emergency situation at the site could impact health, threaten natural resources, or require evacuation, and particularly with the close proximity of a number of schools, it is unthinkable that Lancashire County Council or our government should have considered allowing Cuadrilla to go ahead with fracking without the local community being fully aware of what would happen in the event of an accident on site.

The recent pipeline explosion in British Columbia resulted in an evacuation zone extending over several kilometres – there were just 100 people in that area: in the equivalent zone near the PNR site there would be thousands if not tens of thousands

Cuadrilla can now carry on regardless, ignoring the urgent warning issued this week by the IPCC [Intergovernmental Panel on Climate Change] about the need to reduce our dependence on fossil fuels, but all of the fracking companies need to know that fracking will never get a foothold in the UK because they will meet resistance at every stage of their projects.

An affront to democracy?

It seems, as with the case of the jailed fracking campaigners, that the law is an ass when it comes to local democracy and the environment. But the people involved in the Preston New Road campaign are resilient. And Cuadrilla should know that, just because a court has given them the green light to frack, locals haven’t. Protests and resistance will continue.