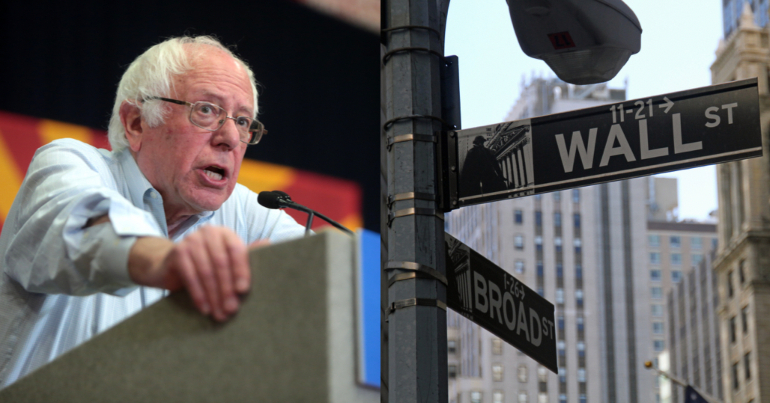 US Senator Bernie Sanders has been in the news lately for his role in getting a ‘pay increase‘ for Amazon workers. But his new proposal takes aim at Wall Street bootlicking in Washington, and it would have far-reaching effects on both the US and global economy.

On 4 October, Sanders introduced legislation to the US Congress that would break up the country’s largest financial institutions. The proposed law would prohibit them from “holding assets, derivatives and other forms of borrowing worth more than 3 percent of the entire U.S. economy”. Today, that would mean a cap of around $584bn.

This would apply to the country’s major banks, like J.P. Morgan, and to other financial institutions, like Berkshire Hathaway. As a result, these companies would have to downsize their holdings. They would have two years to do so. If they failed to comply after this time, the federal government could intervene. And if necessary, it could forcibly break them up into smaller entities.

No financial institution should be so large that its failure would cause catastrophic risk to millions of Americans or to our nation’s economic well being… We must end, once and for all, the scheme that is nothing more than a free insurance policy for Wall Street: the policy of ‘too big to fail.’

10 years after the last capitalist crash

Sanders chose the 10th anniversary of the enactment of the Troubled Asset Relief Program (TARP) to introduce the bill to Congress. TARP was the mechanism that bailed out major financial institutions, initially to the tune of $424bn, following the 2007/8 crash. TARP pay-outs ended up in the trillions. According to some estimates, banks ultimately got over $29tn.

Though TARP began in the final months of the George W. Bush administration, Barrack Obama supported the bank bailout both during his campaign and after his election in 2008. In fact, his record on the financial sector was little better than that of his predecessors. Once elected, for example, he appointed the same Wall Street insiders who presided over the crash to key government posts. He even kept some of Bush’s key staff in place, such as chairman of the Federal Reserve Ben Bernanke.

And though Obama supported the Dodd-Frank Act, which marginally but insufficiently increased regulations and oversight on the finance industry, he failed to push for real reform that would prevent such a crisis from occurring again. Perhaps most significant was his failure to reintroduce the Glass-Steagall Act, which separated commercial and investment banking before its repeal in 1999.

Right-wing critics of Obama accused him of being a ‘closet socialist’. But ironically, the bank bailout represents the one policy of his that is arguably socialist in nature, except that it constitutes what Noam Chomsky has dubbed “socialism for the rich“.

Labor lawyer and author Thomas Geoghegan pointed out shortly after the crash that a genuinely free-market capitalist system would simply have allowed insolvent banks to fail. He said:

I would let the insolvent banks go into receivership… wind them down, basically let them die… Let the big banks go into a receivership where at least depositors are insured… and the people are protected… No bank is too big to fail… Shareholders who are quite wealthy can take a loss. That’s the way capitalism works.

Instead, at public expense, the government shielded banks from market forces and the consequences of their actions. As Chomsky put it:

Every time there is a crisis, the taxpayer is called on to bail out the banks and the major financial institutions. If you had a real capitalist economy in place, that would not be happening. Capitalists who made risky investments and failed would be wiped out. But the rich and powerful do not want a capitalist system. They want to be able to run the nanny state so when they are in trouble the taxpayer will bail them out. The conventional phrase is “too big to fail.”

Without massive political change, Bernie’s bill will struggle to pass

The proposal by Bernie Sanders has practically zero chance of becoming law given the current makeup of Congress. Republicans currently control both the House of Representatives and the Senate. And they strongly oppose such reform, viewing it as ‘red tape’ which ‘distorts the workings of the market’ (oh, the irony!). This is, in large part, due to the fact that they receive millions in campaign contributions from the very Wall Street and other corporate interests that would stand to lose out.

This status quo shields an out-of-control finance industry from the consequences of its own insane risk-taking and instead pushes those consequences onto the shoulders of the rest of society.

Only by electing genuine progressives like Sanders – who challenge the party establishment – can we hope to end the era of ‘too big to fail’ and help save ordinary people from the next capitalist crash.

– Express your support for a Robin Hood Tax on financial transactions.

– Contact your MP or member of congress and call on him/her to support better regulation of the financial industry, the enactment of a Glass-Steagall-like law and establishing a public bank.