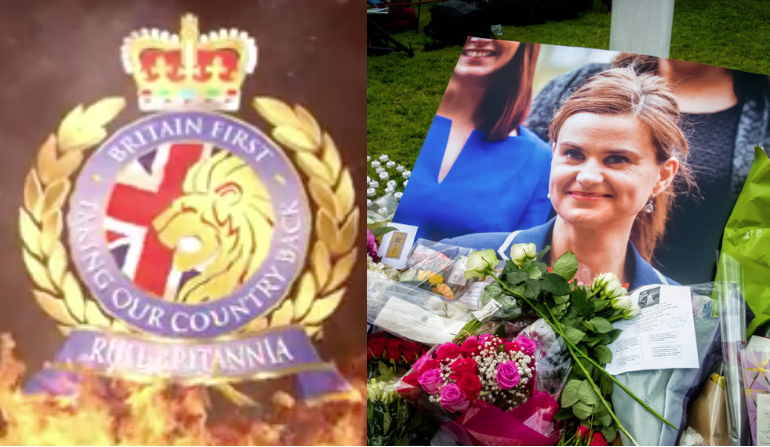 Britain First leader Paul Golding has issued a video which promises the “miserable end” of UK politicians, citizens and non-Christians. Just six months after the killing of Labour MP Jo Cox, it seems Golding is essentially calling on his supporters to strike again.

The quest for vengeance

The video begins with an excerpt from the Bible, which signposts where the diatribe is headed from the outset.

Be strong, and let us fight bravely for our people and the cities of our God. (Samuel 10:12)

Golding makes much of his recent incarceration in the “dingy, cramped, Victorian hellhole” of Pentonville prison in the video. He states that:

For weeks, I languished on 24-hour lock down, with only an occasional visit from the prison guards to keep me company.

This nightmare to which Golding refers is serving just four weeks of an eight-week sentence for contempt of court. He and fellow Britain First thugs liked to barge into mosques, interrupting prayer services and terrorising worshipers. As far as porridge goes, Westminster suits like Jeffrey Archer and Chris Huhne have done tougher time than Golding for non-violent crimes. They didn’t whine about feeling lonely either.

In Golding’s mind, he’s a martyr in a holy war. In this video, he calls for more martyrs to join him to:

Confront and oppose every traitor in this country. All the politicians, all the journalists, who have spent their careers undermining our nation: you will succumb to this movement eventually, and endure a day of reckoning for your crimes against our nation.

Every lie, every act of treachery, will be revisited upon you ten-fold. When your day of justice arrives, you are going to wish you never raised a hand against this nation.

During this call for vengeance, images of Prime Minister Theresa May and Labour leader Jeremy Corbyn taken with non-white people flash on the screen. Apparently, standing for a photo with a non-white person now counts as evidence of treason. Not only is Golding calling for violence, but he is providing targets:

If there are any leftists out there watching this, take note. That I am your enemy. And I will not stop until every last one of you is brought to justice…

Golding then invites everyone who shares this vision to join him in Telford on 25 February, for what appears to be a rally of domestic extremists.

Paul Golding is a terror threat

A clear threat of violence against named civilian targets, and a date. In any reasonable world, this would constitute a terror threat. But the video remains on Facebook, now with over 70,000 views. It has gone down very well with supporters. And they have joined in the calls for executions and vengeance.

Some even had the nerve to compare themselves (without irony) to South African civil rights champion and President Nelson Mandela.

The last time a UK politician was murdered on UK soil, the perpetrator was not one of Britain First’s ‘Muslim Paedophile Terrorists’. It was by a bigot shouting ‘This is for Britain!’. On June 16 last year, Thomas Mair shot and stabbed Labour MP Jo Cox multiple times as she arrived for her constituency surgery in Birstall, West Yorkshire. Cox died at the scene. Mair had known ties to far-right groups, although Britain First sought to distance itself from the attack, insisting it “would never encourage behaviour of this sort”.

But it seems that, barely six months later, Paul Golding is doing just that – inciting far-right nationalists to attack again. To take vengeance on politicians and journalists who he views as ‘race traitors’. And that is utterly sickening.

Golding even has the nerve to invoke imagery of Britain fighting in the Second World War, as if his mission is a continuation of that fight. In reality, it is a betrayal of that struggle.