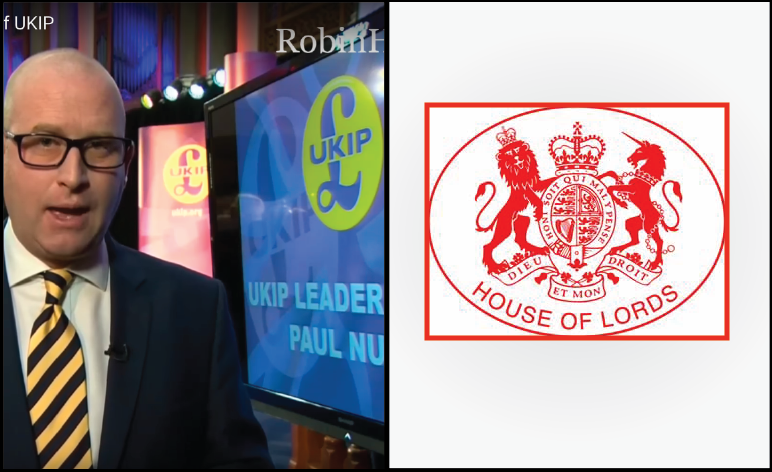 On 17 January, Theresa May promised that parliament and the House of Lords would be given a vote on the government’s final Brexit deal. The UKIP leader, Paul Nuttall, responded by warning that the Lords could sign their ‘death warrant’ if they voted against Brexit. Nuttall clearly was not threatening an actual ‘death warrant’. But it is another instance of a sovereign British institution being threatened by a prominent right-wing Brexiteer.

Of course it is a worry because if they vote against it then we are back to where we were in the first place. It’s a bit like snakes and ladders.

But, you know, woe betide the House of Lords if they vote this down. You know, we will be back to a hundred and seven years ago, to another election called The Peers versus The People. And I guarantee the people will win. And the House of Lords could well sign its own death warrant.

But woe betide any MP who votes against it, and certainly woe betide the House of Lords if it tries to meddle with Brexit.

The House of Lords

There are of course arguments in favour of replacing or dismantling the House of Lords. The Electoral Reform Society notes:

With the power to appoint anyone, the House of Lords could exactly mirror the social make up of society, but this is simply not happening. Only 29 peers are under 50 – Lords have only recently been given the ability to retire, but are eligible to sit in the Lords for the rest of their life. Female representation in the Lords has only recently reached 24%

As independent Crossbench peers have to fit their time in the House of Lords around busy careers, the business of the house is often left to peers who are former politicians. 25% of Lords appointments since 1997 are former MPs who lost elections or resigned. These peers owe their position purely to patronage, with the result that 71% of the House of Lords votes on party lines.

It’s one thing to oppose the House of Lords because it’s undemocratic. It’s quite another to oppose it because they are not falling in line with what you want. Especially from a person who in November 2016 was demanding not for an end to the House of Lords, but that it be expanded to include more than 20 UKIP peers. As Nuttall told The Sunday Telegraph:

Four million voters and not one single peerage. It is unfair and obscene. All we’re asking for is fairness.

A comment from someone who The Sunday Telegraph described as a ‘senior Tory’ gave clarity on how the House bolsters party lines:

It would not necessarily be a bad situation for us. It would be helpful for votes on Brexit and grammar schools

UKIP has often insisted that Brexit is decided. The reason given for this is usually that it’s the “will of the people”.

So by 2012, using Nuttall’s own logic, you could argue that the people had spoken. They didn’t want him representing them. He had lost. He should have just got over it.

Nuttall’s electoral failings were not universal, however. And he was elected to represent the North West of England as a Member of the European Parliament. Nuttall describes his role as follows:

But this is also Nuttall, in response to The Telegraph exposing his abysmal attendance at the European Parliament:

Today’s Daily Telegraph claims my attendance record in the European Parliament is terrible. Alongside UKIP MEPs, David Campbell Bannerman and Godfrey Bloom, my attendance record at plenary sessions is the lowest of any British MEP. I’ll hold my hands up, as my attendance record is flaky to say the least. But so what? I treat Brussels with the contempt it deserves: it has no real democratic mandate and MEPs only exist as a pretence to make the EU look democratic, when in fact we all know it is not. I also keep abreast of what is going on out there through the work of the excellent UKIP staff. So as I always say, one does not have to be in the joke shop to know the jokes.

The people had spoken. They had elected Paul Nuttall to represent them in the European Parliament. Yet Nuttall obviously believed he was free to ignore this will and do whatever he felt was right. And you could argue that people voting for him wanted this sort of behaviour. But if that was the case, why did Nuttall feel compelled to promise that:

As well as defending the UK’s interests in the European Parliament, Paul will campaign in Britain so UKIP can make a breakthrough at Westminster.

The will of the British people

UKIP benefitted from this. UKIP in fact was almost entirely based around its ability to do this. And yet, now that it’s got what it wants, it thinks this should all stop. But imagine its horror if mainstream politicians had been going on television in 2009 and saying “woe betide UKIP if it carries on challenging our EU membership”.

The fundamental and depressing irony of UKIP is that it is a party which challenged a political decision, and now insists that no one else should be allowed to do the same. And that is not how a party which claims to be primarily concerned with UK democracy should behave.

– Please support The Canary, as we strive to provide truly independent news.