At PMQs, the 'Irony Lady' revealed exactly what she's been hiding from the British public - Canary 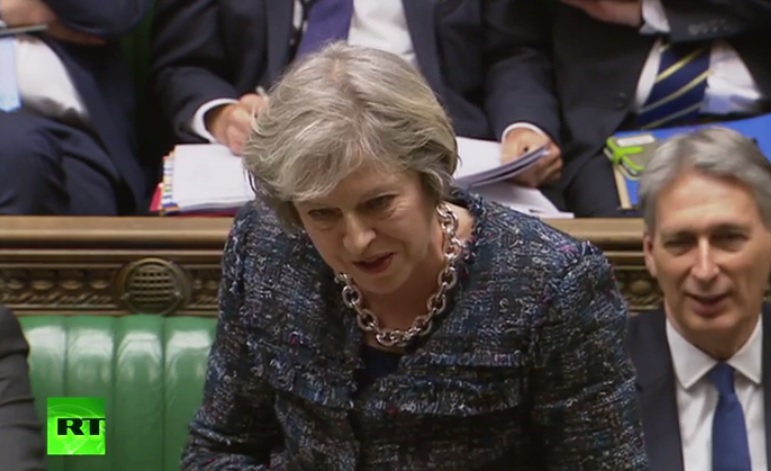 At Prime Minister’s Questions (PMQs) on 18 January, Theresa May refused to answer one crucial question a number of times. And her refusal to address this query, posed by Labour leader Jeremy Corbyn, revealed the Brexit truth she is trying to hide from the British public.

PMQs: Corbyn asks at what cost?

Following May’s Brexit speech on 17 January, most of Corbyn’s questions focused on Britain’s upcoming negotiations with the EU. First of all, he branded her the “Irony Lady” for claiming Brexit strengthened parliamentary democracy while sidelining it over the plans. Corbyn then asked May about comments she had made about future UK access to the single market. He said:

I can say to the right honourable gentleman that access to the single market is exactly what I was talking about yesterday in my speech. One of the key principles, key objectives, is that we negotiate a free trade agreement with the European Union that gives us the widest possible access for trading with, and operating within, the European Union.

She also said her ‘frictionless’ comment pertained to borders in the “customs issue”. But at no point did she respond to the access fee question. So Corbyn addressed it again:

The question was Mr Speaker, would we have to pay for access to the market or not? The Prime Minister has not given an answer on that.

May avoided answering the question once more, provoking yet another reminder from the Labour leader. So why wouldn’t the Prime Minister respond?

No such thing as a free ride

In June 2016, Michael Dougan, Professor of European Law at the University of Liverpool, laid out the trade implications of leaving the EU. He noted that, outside of the EU, the Norwegian option (paying “a whopping membership fee” for access to the single market without influence over EU rules) was a possibility. But this option is already off the table. May announced in her Brexit speech that the UK will leave the Single Market.

Dougan then explained what further options could be explored:

That leaves two other possibilities. The first is that we do what the Swiss have done, or the Mexicans, or the South Koreans, we have a new much narrower, much shallower, trade relationship based on a bilateral agreement with the EU. Or instead we simply forget about trying to have a new trade relationship with EU, other than through the ordinary rules of the WTO.

May’s speech suggests the UK is on course to aim for a bilateral agreement. Currently, countries like Switzerland pay around 40% as much as the UK’s contribution for EU membership for access on those terms, according to the Centre for Economic Performance (CEP). And that does not include free trade in services.

Taking into account the figures brandished about by the Brexit camp in the run-up to the referendum, that’s a cost of over £7bn for a bilateral agreement. Every year. While if you stick to more sober figures that the BBC calculated, it’s almost £3.5bn.

So any trade deal with the EU will come at a cost. To imagine the EU will waive away any fee for the UK operating within its trade area is a pipe dream. And May needs to be honest with the British public about exactly what that price tag will be.