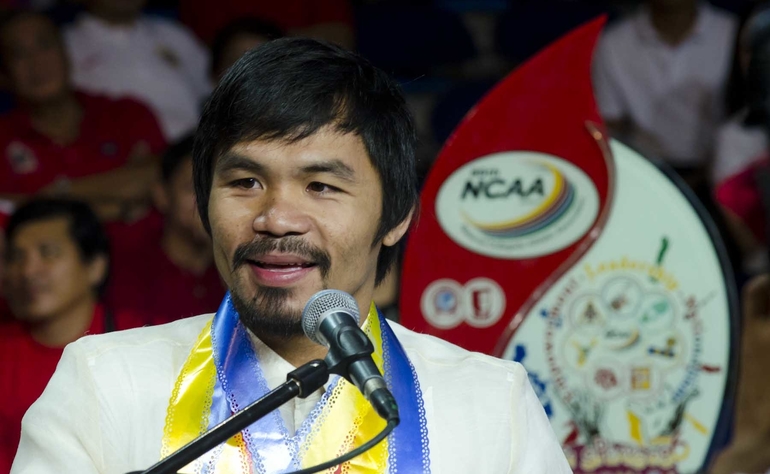 Former boxing star Manny Pacquiao, now a senator in the Philippines, just gave a speech on how to tackle the illegal drug trade. As part of the Philippines’ war on drugs, Pacquiao believes that reintroducing the death penalty would be an effective strategy. He said:

One of the most heinous crimes recognized today is the problem on illegal drugs. It doesn’t choose its victim. This is the reason why I filed Senate Bill Number 185.

This bill would seek to impose the death penalty for certain drug-related crimes.

The fight against illegal drugs

Pacquiao praised the police for cracking down on the illegal drug trade in the Philippines. The police say that 1 million people have surrendered, been arrested or killed in current President Rodrigo Duterte’s war on drugs.

Human Rights Watch insists that, since July last year, this drug war has resulted in around 5,000 extrajudicial killings. As previously reported at The Canary, Duterte likened his drug crackdown to Hitler’s extermination of Jews. And Pacquiao supports this violent campaign.

No respect for international law

The Philippines abolished the death penalty in 2006. Before then, the country had the world’s second largest death row population among democratic nations. By reintroducing capital punishment, and extending it to drug-related crimes, the country could soon overtake the US.

Human Rights Watch recently urged the Philippine House of Representatives to reject a proposal to reintstate the death penalty.

UN assistant secretary-general for human rights Ivan Simonovic, meanwhile, said there is no evidence that the death penalty deters any crime.

The Philippines would also violate its international legal obligations by reinstating capital punishment. The country is party to the Second Optional Protocol to the International Covenant on Civil and Political Rights (ICCPR), which states that:

no-one within the jurisdiction of a State Party to the present Protocol shall be executed.

It also says that:

each State Party shall take all necessary measures to abolish the death penalty within its jurisdiction.

And where the death penalty is allowed, human rights law limits the punishment to “the most serious crimes”. These are typically crimes resulting in death or severe bodily harm. Many believe that drug-related offences fall outside the scope of “serious crimes”.

The UN Office on Drugs and Crime called on member countries to prohibit the use of the death penalty for drug-related crimes. And in 2014, the International Narcotics Control Board said the same thing.

Not fit for the job?

Pacquiao’s statements suggest he is failing to listen to the evidence and is ignoring international law. And since he is still boxing, it is questionable whether he is fully dedicated to his role as senator. Last year, he attended only one session at the House of Representatives.

Before taking on the role, critics said he was “not fit for the Senate”. Many wondered how a professional boxer had the relevant job experience to become a law-maker. Pacquiao responded: “I can memorize biblical verses so it won’t be difficult for me to do it.”

This is the same person who called gay people “worse than animals”. And following the backlash against this homophobic statement, he said: “I’m not bothered,” adding, “Jesus lives in me, so I’m always happy.” He also posted a biblical quote on Instagram to justify what he said. Then, he shared a verse which calls for the death penalty for gay people.

In fact, Pacquiao’s passionate religiosity informs his support for capital punishment in general. He said:

Death penalty is lawful, moral and sanctioned governmental action. Having read the Bible on a regular basis I am convinced that God is not just a God of mercy, but he is also a God of justice.

To some, however, his commitment to the death penalty – and President Duterte’s controversial drug war – will seem strange, considering he claims to believe firmly in the “sanctity of life”.