As a Labour council tries to kick people out of their homes, a Tory minister comes to the rescue [TWEETS] - The Canary 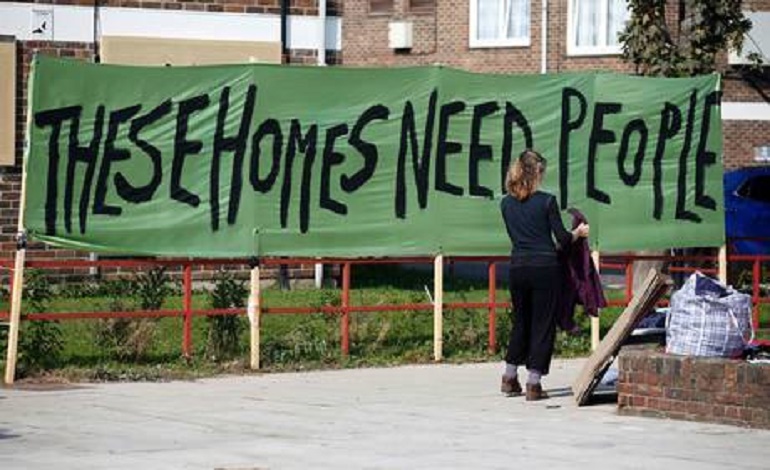 A Labour-run local authority has won the first phase of a court battle over the ‘regeneration’ of one of Europe’s largest council estates. Southwark Council has been trying to kick out council house leaseholders from the Aylesbury Estate in south London. The council claims it’s going to improve the estate. But campaigners say it’s just more social cleansing. And the person defending the residents is not who you’d think. Surprisingly, it is Conservative Communities Secretary Sajid Javid.

A Tory knight in shining armour?

Javid has previously blocked Southwark Council plans to force eight leaseholders to sell their homes. The council would have given residents Compulsory Purchase Orders (CPO), so it could buy their homes off them whether they liked it or not. This was because these eight residents were stopping the building of 3,500 new houses.

But Javid said that Southwark Council was violating the residents’ human rights. A judge, however, has granted Southwark a judicial review into Javid’s decision.

But the Aylesbury regeneration trouble isn’t new. It has a long history that goes back as far as the nineties.

The estate has been scheduled for regeneration since 1997. Tony Blair used it as the backdrop to his first speech as Prime Minister, where he talked about the “forgotten people” he and his government would help. Blair’s government approved the Aylesbury regeneration in 2005, handing Southwark Council a £56m grant. Even though more than 70% of Aylesbury residents had voted against the plans.

The regeneration involves the demolition of all of Aylesbury’s 2,759 homes. But residents owned many of their own homes, buying them under Margaret Thatcher’s right to buy scheme. So Southwark Council first had to purchase these. But as a Freedom of Information (FOI) request showed, the council was paying residents well below the market value for their homes. As The Guardian noted:

It all sounds lovely

Southwark has claimed the regeneration of Aylesbury will bring:

But the opposition to the regeneration has been “fierce“. In February 2015, protesters occupying the estate clashed with around 100 riot police. The occupation by campaigners is ongoing. The remaining Aylesbury residents are currently holding the Thurlow Lodge Community Hall, and have set up a new residents association.

Southwark Council caused uproar when it erected a giant metal-spiked fence, to ‘protect’ residents from ‘protesters’. Even though some of these residents were allegedly protesters themselves:

Aylesbury Estate residents well pissed off about being sealed in by Council fences. Have to ask security to come & go pic.twitter.com/Ybwrk8v9Cv

Also, only 33 residents were consulted [pdf, p96] over HPA architects’ final plans for the estate. And Notting Hill Housing, Southwark Council’s partner in the regeneration, has been criticised by campaigners. As the 35% campaign wrote:

[Notting Hill Housing] CEO Kate Davies was a fellow of the Centre for Social Justice [CSJ] – the conservative think tank set up and chaired by Iain Duncan Smith, which conceived the idea of both affordable rent and right-to-buy for housing association tenants: Kate Davies co-authored this report [pdf] by the CSJ, in which she claimed that council estates are “ghettos of the poorest and neediest people” that are “subsidised by the taxpayer“ and “provide low cost living for life funded from the public purse“. She said that tenants “often pay little or no rent, and get their home maintained in good order for free”. She concluded that “social housing is not a desirable destination“, that “private ownership is preferable to state provided solutions“ and that social housing providers should be able to set rent levels without restrictions.

Campaigners have also raised the question of rent hikes for returning residents. Southwark claims that around 37% of new homes will be for social rent. But Notting Hill will set these rates as a percentage of market rate (up to 50%) that will rise as the private rental rate does. Whereas social rents are decided using a set formula, to ensure they do not rocket.

But it’s the fact that Southwark Council itself admits [pdf, p.25] that the number of social houses will be reduced by between 788 and 1,116 which angers many campaigners the most.

In his latest spoken word piece Estate of War, the rapper, poet and activist Potent Whisper has tackled the issue of regeneration:

The Canary asked Southwark Council for a response. It sent this statement:

Southwark Council has called on Secretary of State Sajid Javid for a meeting to discuss the regeneration of the Aylesbury estate, following a hearing at the Royal Courts of Justice.

The hearing was the latest step in the council’s attempt to overturn the government’s decision not to allow the compulsory purchase of 8 remaining properties, needed if 800 new homes are to be delivered. At the hearing Judge Collins agreed that the council could proceed with the judicial review process, proposed that a meeting should be held between the two parties before any litigation begins, considered that it would be unlawful for the council to offer more than is allowed under the Compensation Code, and recognised that the decision has significant knock-on effects for other schemes.

Cllr Peter John, Leader of Southwark Council, said: ‘I wrote to Sajid Javid last year, asking him to look again at his decision, but his response was effectively that he would see us in court. This week a Judge echoed our view that the decisions to date have been based in part on speculation and misunderstanding, and I would urge the Secretary of State to listen to this impartial view, and meet with us to properly consider this important issue. His decision threatens the future of homebuilding in London and across the country, and it deserves his full attention. We can also save the taxpayer considerable sums of money if we can resolve this without involving the courts. I have written to him to request an urgent meeting.’

No, really. Trust us

The CSJ report was published in 2008. Kate Davies chaired the working party but did not write the report as a whole. The comments need to be read in context, as isolated sentences can be read very differently when part of entire sentences or indeed a whole report. Davies has written a great deal of articles on the positive benefits of social housing, including her blog for Inside Housing just last week. Notting Hill Housing, and Kate Davies, is committed to providing good quality homes for those who could not otherwise afford them. We manage 32,000 properties across London and have thousands more in the pipeline. Notting Hill Housing believes that having a diverse range of housing products serving the needs of all Londoners is the correct approach for our residents, our organisation and the capital as a whole.

In 2015, The Independent published an investigation into the extent of social cleansing in London. It found that, in just three years, around 50,000 families had been moved out of the capital. The main reason? People could no longer afford to live in London.

Javid’s intervention over the Aylesbury Estate should be cautiously welcomed.

Moreover, the so-called ‘regeneration’ of Aylesbury epitomises politicians’ attitude to estates. Many are unable to see them as coherent communities, where people live with their own sets of values. Where people feel ‘part’ of something. And where people feel connected to others. Politicians just see problems. Ones which throwing money at both estates and private developers will solve. And with the problem of social cleansing rife across London, there are too many cases of political classism manifesting with bulldozers. With some money to be made by those involved along the way.