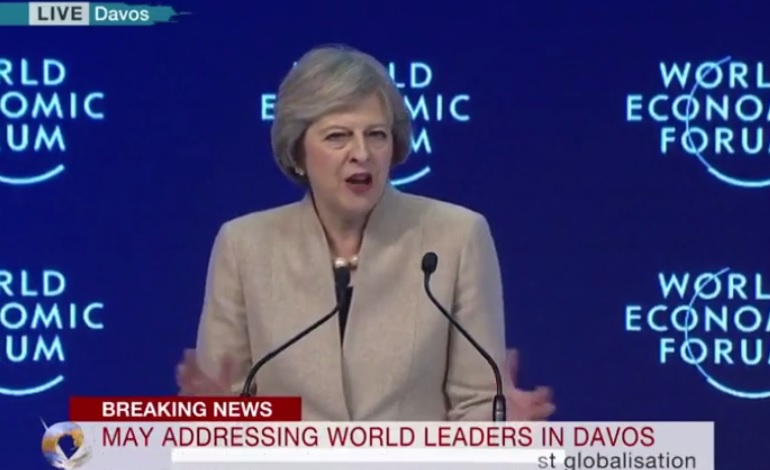 On 19 January, Theresa May delivered a speech to the World Economic Forum (WEF) in Davos, Switzerland. In that speech, the UK Prime Minister crapped all over ex-Prime Minister Margaret Thatcher’s most renowned legacy. But May also revealed the economic hand she intends to play in the years to come. Which is not so far from Thatcher’s legacy after all.

Here’s a sobering round-up of some of her ‘finer’ points.

Maggie was wrong, says May

Towards the end of the speech, May explained that the UK has “embarked on an ambitious agenda of social reform”. These are the ‘reforms’, of course, that have led to food banks handing out more than five million meals over a six month period in 2016. It is also the “agenda” that has been a contributing factor in 590 suicides and 279,000 cases of mental illness among unemployed people, according to a report by researchers at Oxford and Liverpool universities in 2015.

But these reforms, May told the Davos crowd, show her government’s willingness to step up “and work for everyone”. Including the ‘just getting bys’, she noted. May then detailed the overarching vision she has:

It is to build something that I have called the shared society. One that doesn’t just value our individual rights, but focuses rather more on the responsibilities we have to one another. That respects the bonds that people share. The bonds of family, community, citizenship, and strong institutions.

Too often today, the responsibilities we have to one another have been forgotten, as the cult of individualism has taken hold.

In the UK, the responsibility for that “cult of individualism” primarily lies with one woman: Margaret Thatcher. In 1987, the then Prime Minister famously said:

They are casting their problems at society. And, you know, there’s no such thing as society. There are individual men and women and there are families. And no government can do anything except through people, and people must look after themselves first. It is our duty to look after ourselves and then, also, to look after our neighbours.

But the reason May chose to renounce Thatcher’s most striking statement soon became clear.

Use windows, not screens

The Prime Minister noted another contributor to this ‘individualistic’ problem:

And globalisation and the democratisation of communications has encouraged people to look beyond their own communities and immediate networks, in the name of joining a broader global community.

It is, of course, true that globally connected systems have linked people around the world. But those systems have also allowed citizens across the globe to be informed. To bear witness to the world at large and take stock of their, and their country’s, place in it. And, crucially, to deliberate on how the world does and should work.

But for May, this threatens to “loosen the ties that bind our society together, leaving some people feeling locked out and left behind”.

Davos, WE will not be left behind

Despite May’s warning of the “globalisation and the democratisation” of connectivity, in her opening she committed the UK to being a champion of globalisation for business. She vowed that the UK will:

step up to a new leadership role as the strongest and most forceful advocate for business, free markets and free trade anywhere in the world

While she cautioned the crowd that this global business arrangement is at “risk of being undermined” by “parties of the far-left and the far-right”. These factions, she claimed, are exploiting the perception among sections of the public that forces such as globalisation “are not working for them”.

Yet as we recently detailed at The Canary, ‘free market’ capitalism does not work for much of the world’s population. That is a fact, albeit an inconvenient one for the attendees at Davos. And there can be no clearer proof than Oxfam’s latest finding that eight billionaires now own as much wealth as the bottom poorest half of the world combined.

So if May wants fellow politicians to stop ‘exploiting’ that truth, she needs to work towards changing it.

But May’s contribution at Davos suggests the current UK government will not fix this broken system. As the BBC glowingly reported, she believes that, if businesses take it on themselves to “shape up” somewhat (by paying taxes and embracing their social responsibility), that will solve all our inequality ills.

May’s answer to a global economic breakdown that concentrates wealth in the hands of a few was, essentially, just more ‘free market’ capitalism. And to create a cohesive society, she urged people to close their computer screens and open the living room window.

Her vision expands the horizons of business and narrows that of the people. There’s only one winner in that scenario. And it’s quite clearly not the latter.

– Read more Canary articles about the Theresa May, and capitalism.