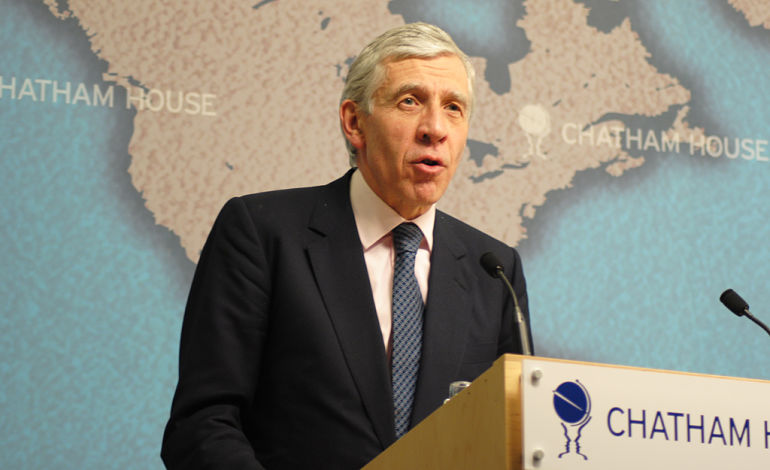 The Supreme Court has ruled that the British government can be sued by a Libyan national. Abdel Hakim Belhadj claims he was subject to rendition, torture and was held prisoner with the full co-operation of British authorities. Belhadj can proceed with litigation against former Foreign Secretary Jack Straw, former senior MI6 official Sir Mark Allen, the Foreign Office, the Home Office, and the UK security services.

This case has dragged on for years because the government has refused to offer an apology to Belhadj and his wife. But there appears to be significant evidence relating to the allegations.

Belhadj – also known as Abdullah al-Sadiq – alleges that he and his wife Fatima Bouchar were abducted and tortured with the approval of the British authorities. He claims they were secretly flown to Tripoli, where Muammar Gaddafi’s security forces tortured them.

In an interview with The Independent, Belhadj describes how three British agents interrogated him over two sessions. The two men and a woman questioned him for two hours at a time. Their questions focused on members of the LIFG (Libyan Islamic Fighting Group). This was a group based in the UK, with alleged links to al-Qaeda.

In April 2012, Belhadj and his wife sued former Foreign Secretary Jack Straw. They alleged UK complicity in the torture and abuse they suffered at the hands of Thai, US and Libyan officials. In December 2012, the British government paid al-Saadi £2.23m to settle his lawsuit without admitting liability.

In November 2014, the Court of Appeal ruled that the case against Jack Straw and Mark Allen could be heard in an English court. The latest ruling by the Supreme Court confirmed this decision.

Documents [pdf, pp 90/91] found in Tripoli confirm that the British government was directly involved in assisting the Gaddafi regime to take custody of al-Sadiq (Belhadj).

[w]e are working energetically with the Malaysian government to effect the extradition of Abdullah al-Sadiq from Malaysia. The Malaysians have promised to cooperate and arrange for Sadiq’s transfer to our custody.

Most importantly, I congratulate you on the safe arrival of Abu Abd Allah Sadiq [Belhadj]. This was the least we could do for you and for Libya to demonstrate the remarkable relationship we have built over the years. I am so glad. I was grateful to you for helping the officer we sent out last week… Amusingly, we got a request from the Americans to channel requests for information from Abu ‘Abd Allah through the Americans. I have no intention of doing any such thing. The intelligence on Abu ‘Abd Allah was British. I know I did not pay for the air cargo. But I feel I have the right to deal with you direct on this and am very grateful for the help you are giving us.

Moussa Koussa was head of Libyan intelligence from 1994 to 2009.

Other documents [pdf], sourced in 2011 in Tripoli by Human Rights Watch, relate to the rendition arrangements of Belhadj and his wife.

These documents describe US offers to transfer, or render, at least four detainees into Libyan custody, one with the active participation of the UK. They also detail US requests for detention and interrogation of other suspects. Along with UK requests for information about terrorism suspects and the sharing of information about Libyans living in the UK. 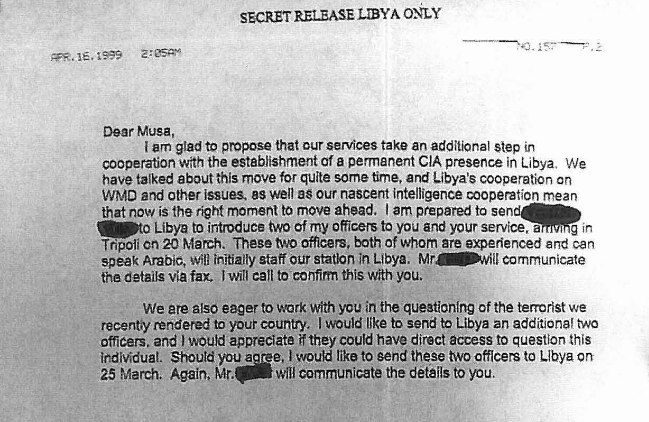 One document included long lists of questions which MI5 and MI6 had request that Libyan interrogators ask Belhadj. The Daily Mail published a redacted version of this document. Below is the unredacted leaked copy: 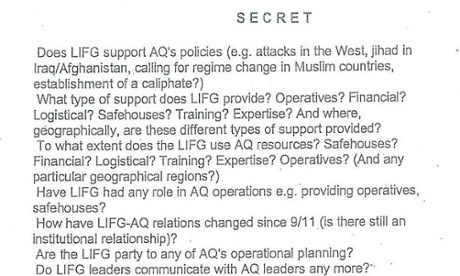 Jack Straw has denied all knowledge of what happened to Belhadj and his wife, saying:

I was never in any way complicit in the unlawful rendition or detention of anyone by other states.

Assuming litigation proceeds, the hearings could prove embarrassing for the British government. Allegations of US rendition and torture may also come up in the hearings.

– Read more on the War on Terror.