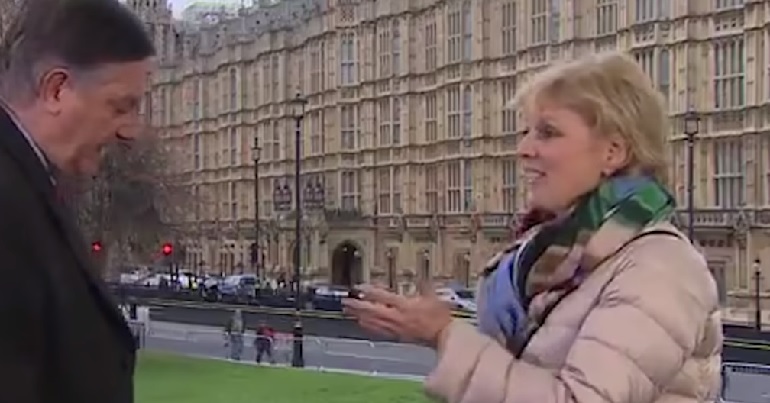 On 7 January, pro-EU Conservative MP Anna Soubry faced verbal abuse as she gave TV interviews. Protesters called her a “Nazi”, and later “jostled” her as she sought to re-enter parliament. This happened on the same day that journalists Kay Burley, Dawn Foster and Owen Jones also faced abuse from pro-Brexit agitators.

While the mainstream media generally showed Soubry sympathy, Twitter users quickly pointed out the key role that most right-wing papers have played in fostering the tense and warlike political environment behind the abuse on 7 January.

Soubry and other MPs soon called for police action against the abusive protesters. Meanwhile, vocally pro-Brexit papers like the Telegraph, the Sun, the Mail, and the Express all reported critically on the incident. They called the culprits a “mob” of “pro-Brexit yobs“. But Owen Jones spoke for many on Twitter when he insisted that such criticism was two-faced considering these papers’ past record:

The Mail, for example, has previously called Soubry a “traitor”:

And these papers haven’t just stirred up anger among hard-right Brexiteers. For years, they’ve also used smears and misleading coverage to attack veteran anti-racist Jeremy Corbyn and his supporters:

i emailed police at https://t.co/SSI56X54je to report Hodges. i'm concerned by Hodges & general tension in the UK pic.twitter.com/VIQ2V65o8a

Because of this, Twitter users expressed sympathy for Soubry while also highlighting just how normal anti-Corbyn abuse and smears are in the pro-Conservative media (and in parliament):

Uproar when Anna Soubry is branded a Nazi, yet billionaires freely post photoshopped pictures of Corbyn sitting in a car with Hitler and Momentum are regularly attacked as 'Stormtroopers'. Hypocrisy, much?

The far right have killed one Labour MP, tried to kill another, plotted to kill Jeremy Corbyn and Sadiq Khan. Several far right plots have been foiled. It is a real and present danger fuelled by the right wing media. Come back to me when there’s a far left terror threat. https://t.co/hnQLlgufHr

I extend my solidarity to Anna Soubry, but she wasn’t their only target. Given we’ve established the far right threaten Labour people and the left, and have killed a Labour MP, can we not airbrush the left from this please? https://t.co/1zI1Sg8ccd

Corbyn has long faced very public insults and unfounded smears. Former prime minister David Cameron claimed he was “Britain-hating” and called him and his anti-war colleagues “terrorist sympathisers”. And countless times, Corbyn has been unable to continue a speech in parliament because of Tory insults. Elsewhere, high-profile Tory politician Boris Johnson has labelled Labour MPs “anti-semitism-condoning Kremlin apologists”. (Note here that, while Labour has taken more action than others against discrimination of all types, the mainstream media has been all but silent about the Conservative Party’s woeful response to “endemic racism” in its own ranks.)

Labour’s Diane Abbott, meanwhile, has “had rape threats, [and been] described as a pathetic, useless fat black, piece of sh*t, ugly fat black bitch and n*****”. She has also received more “racist tweets and online racism” than any other female MP.

And in spite of little sympathy in the mainstream media, Corbyn, Abbott, and their allies have tried to take the endless abuse on the chin and rise above it.

Soubry is no hero. Nor is she above abusing her opponents. She has backed Conservative governments through vicious austerity, privatisation, and environmental destruction. And she has called shadow chancellor John McDonnell a “nasty piece of work” on national TV, claiming that he has “terrorised” anti-Corbyn MPs.

However, all elected politicians should be safe from verbal and physical abuse. That means both Conservative MPs and Labour MPs. Their records should speak for themselves, and should be the focus of citizens’ praise or criticism. In a democratic society, we should always seek to win our arguments with facts. And they should be more than enough to do the job.

Today, we live in a hostile environment. And the abuse of 7 January is proof of that. But let’s not forget how we got here. The establishment media brought us to this point – and their anti-Corbyn friends in parliament egged them on. Both politics and the media desperately need a change in tone – and the sooner the better.