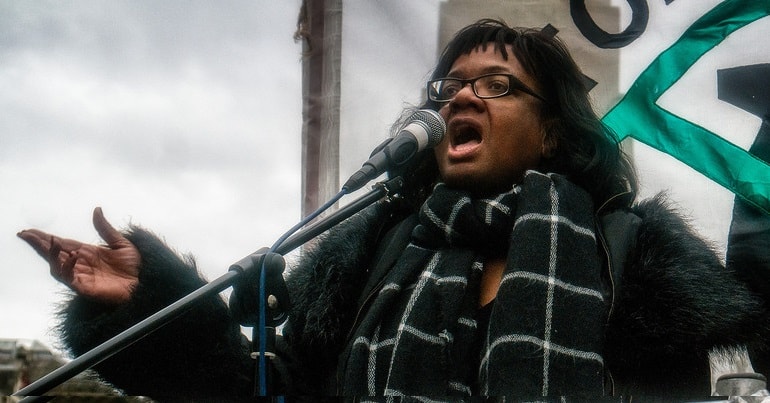 Kirklees recently shot into the news due to an apparently racist attack on a young refugee. The attacker even got support from Stephen Yaxley-Lennon (aka ‘Tommy Robinson’). But now, the West Yorkshire borough is fighting back against the far right. And as thousands of people prepared to rally against Yaxley-Lennon and his supporters in London, Labour’s Diane Abbott joined Kirklees anti-racists in sticking two fingers up at people pushing hatred and division.

We’re seeing a rise in racism, antisemitism, and Islamophobia. So let’s remember the tragic death of Jo Cox… Let’s remember much more recently the very horrible incident with the Syrian young person that was tortured – water-boarded. What has this country come to where we are torturing young people because they are a different faith or a different colour?

There are too many frightening incidents of blatant racism, Islamophobia and antisemitism. And often, it finds an echo in the mainstream press. I have had appalling things tweeted at me, and online. But it echoes a narrative in the mainstream press that says that anybody who wants to stand up for communities is somehow a dangerous extremist.

if we can’t show solidarity with each other, then there is no hope.

Thank you @JaneAitchison you have been so incredibly supportive along w/ @HackneyAbbott @NavPMishra @Yasmine_Dar
It is very difficult to speakout about racism but having principled socialist like you standing alongside makes the fight for a equal society more achievable #Kirklees pic.twitter.com/t4nUZSyMgN

Abbott also made an important link, highlighting that:

In the aftermath of the financial crisis in 2008, we have seen a steady rise in racism and xenophobia.

And this fits in with what others have insisted: that the recent rise of the far right is largely down to growing frustration in the wake of the 2007/8 capitalist crisis and the neoliberal austerity that has followed. In the UK, for example, the ruling Conservative Party chose to push the failed and extremist dogma of neoliberalism onto the country from 2010 onwards. Studies have since shown that the areas which austerity hit the hardest mirrored the areas that voted Brexit in 2016 – highlighting the anti-establishment frustration that government policies fostered.

As academics have also explained, the far right has been able to exploit the anger of some people hit hard by austerity and direct it into the scapegoating of minority communities – and usually immigrants.

As Abbott pointed out:

In the run-up to the last general election, I had more racist tweets and online racism than all the other women MPs put together.

And she called for solidarity, saying:

people sometimes say to me ‘oh, you must be strong’. No one is that strong – and sometimes it does get to you. So it’s really important that we show solidarity with each other.

We have the power to stop it

As Abbott insisted in Batley, we need to unite and oppose all forms of discrimination. But we also need to take power back from the neoliberal extremists in government. Because fighting racism means fighting the economic injustice and inequality which help to fuel its growth too. And that’s never going to happen under a Conservative-led government.