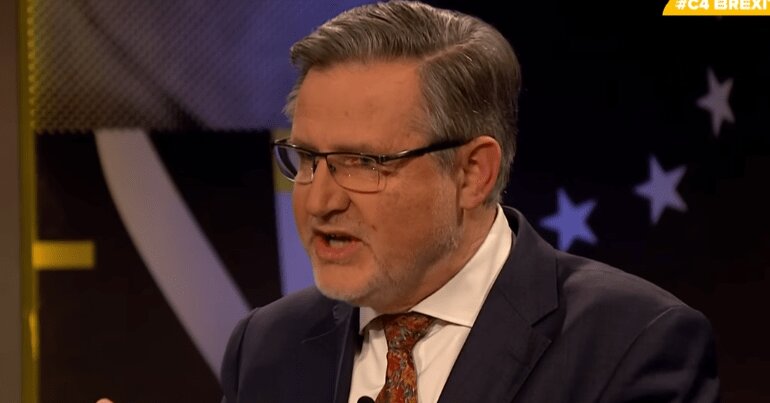 Gardiner suggested that a deal from Labour would remove the UK from EU restrictions on public spending, enabling a radical Labour government to invest in communities:

making sure we have aid for our communities, aid for our public services… putting in national infrastructure banks… regional development banks.

By contrast, Theresa May’s deal essentially locks the UK into EU rules that restrict state aid, as part of the ‘backstop’ arrangement. And the Conservative government’s legal advice shows that the backstop would be permanent unless the EU agrees otherwise.

Barry Gardiner to Caroline Lucas: "You may dismiss many people who voted for Brexit as right-wingers. But many of them are good working people who voted for my party and probably yours – and they felt they were not being heard in Europe."#C4Brexit #Newsnight #C4News pic.twitter.com/vY39nUR3tF

Gardiner also challenged the common view that many Brexiteers are “right-wingers”, arguing instead that many Leave voters simply felt the EU had “left them behind”. And the shadow cabinet member said Labour would address that:

If you’re out of the EU and you can do those things, if you can put in that regional infrastructure, then the very people who have felt the European Union left them behind… can be reunited.

A Labour government would establish 12 regional investment banks along with a national one. Through such banks, a Jeremy Corbyn-led government could invest in public services up and down the country, including the NHS, transport, energy, and healthcare.

EU rules place spending restrictions on member states, and that would continue under May’s agreement. Under the Conservative leadership’s deal, the UK would be a rule-taker on probably its most powerful ability – public spending. And the EU considers even unsubstantial public investment as undermining market ‘competition’. But it’s unclear how the union could ultimately enforce national governments outside of the Euro to comply with this.

On 7 December, the European Commission referred Romania to the European Court of Justice for ‘illegal’ state aid of €92m. And while the EU’s state-aid restrictions are “binding and enforceable”, Romania has been ignoring the rules so far.

On Channel 4, Gardiner laid out how Labour’s plan is fundamentally different. Because in power, the party would move towards an investment-based economy, ending the austerity that led to the Brexit vote. That argument should surely be front and centre for Labour right now.