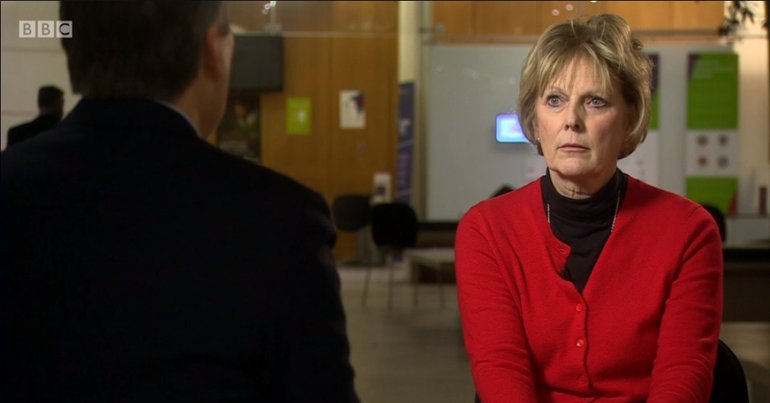 Conservative MP Anna Soubry gained widespread praise this week for denouncing pro-Brexit ‘extremists’ in her party. But while Soubry’s savvy media performances suggest a rebel in the ranks, her voting record on key issues paints a different picture.

Broxtowe MP Anna Soubry has one of the most unpredictable constituencies in the country. An expert in managing her message, Soubry has also managed to win the seat three times in a row. Last time, with a majority of just 863 votes.

In her now viral interview with BBC Newsnight this week, Soubry tooled up and let rip. She denounced the hard right of her party, and her leader Theresa May for indulging them. And she concluded:

Labour’s frontbench itself is ideological.

My frontbench probably isn’t, but it’s in hock to 35 hard ideological Brexiteers who are not Tories.

They are not the Tory party that I joined 40 years ago and it is about time Theresa stood up to them and slung ’em out.

.@Anna_Soubry tells @nicholaswatt it’s time Theresa May stood up to the “hard ideological Brexiteers” and “slung ‘em out” https://t.co/gwWZsznN7M pic.twitter.com/IVemTGXeet

As a gay woman and a Remain voter, I welcomed Soubry’s support for Equal Marriage and her interventions on Brexit. Less welcome was that she rewrote the history of herself and her party too. And she dismissed the largely pro-Remain Labour front bench as “ideological”.

When you see her voting record, you may well feel the same.

First, let’s tackle the “ideological” argument. The Oxford dictionary defines ‘ideology’ as: “a system of ideas and ideals, especially one which forms the basis of economic or political theory and policy”.

By definition, every member of a political party is ideological. And there’s nothing wrong with having an ideology. Indeed, it’s virtually impossible for us not to. What is dangerous is when a person is unable to see their own ideology for what it is. When a person confuses their personal world view with absolute truth, they come unstuck, and bad things start happening. And Soubry has fallen into that trap. For her, Labour politicians are ideological because they have a value system different from her own – and her value system is not ideological, just ‘common sense’.

Next, let’s tackle the extremism argument. Anna Soubry has been a Conservative MP since 2010, and a member of the Conservative Party since the 1970s. This means she has supported the party through three of its most extremist governments: those led by Margaret Thatcher, David Cameron, and Theresa May.

In 1985, Margaret Thatcher spoke in favour of reinstating the death penalty on Channel 4 News. It doesn’t get much more extreme than taking a person’s life. Whether Anna Soubry backs the death penalty or not is besides the point. The point is, it wasn’t a deal-breaker.

In 1988, the Thatcher government introduced Section 28. The rule prohibited schools doing anything to “intentionally promote homosexuality or publish material with the intention of promoting homosexuality”. This meant that, for gay children like me, our sexuality was erased from our education. No sex education, no relationship education, no teacher could tell us our sexuality was equal to being straight through fear of losing their job, or worse. Whether Anna Soubry backed Section 28 or not is besides the point. The point is, it wasn’t a deal breaker.

In 1990, the Thatcher government introduced the ‘poll tax‘, which shifted the tax burden from rich to poor. And there is evidence it may have impacted the result of the 1992 general election “by deterring a significant number of potential voters from declaring themselves on the electoral register”. Whether Anna Soubry backs the poll tax or not is besides the point. The point is, it wasn’t a deal breaker.

After 2010, Soubry served as a minister in various departments of David Cameron’s governments. Like Soubry, David Cameron dressed himself as a moderate. He promised a ‘vote blue, go green‘, ‘hug-a-hoodie‘, ‘compassionate Conservative‘ government; the heir to Blair, not Thatcher.

By the end of his five-year premiership, he’d sold off more public assets than all Thatcher governments combined. Soubry voted for the Coalition Programme for Government, which was the blueprint for ideological austerity. The privatisation of the Royal Mail, selling England’s public forests, trebling university tuition fees, the backdoor privatisation and defunding of the NHS. Soubry backed it all.

In fact, out of 1,441 votes since 2010, Soubry has rebelled a whopping 24 times. That makes Soubry culpable for the extreme policies and extreme outcomes of Conservative government during these seven and a half years. The 134% rise in rough sleepers, the 2,792% rise in food bank use (from the Trussell Trust alone), the 400,000 additional children living in poverty. Extreme policies, extreme outcomes. And Soubry backed virtually all the policies that landed us here.

The cult of personality

None of this undermines Anna Soubry’s efforts to stand firm on her commitment to the European Union. And it certainly doesn’t excuse the disgraceful threats and harassment she has received from the right-wing press and others for doing so. But it does put her tough talk in the proper context of her actions.

Soubry joined the party that spawned Enoch Powell, Norman Tebbit and Margaret Thatcher. And she remains an MP for the party that gave us Iain Duncan-Smith, Boris Johnson, and Jacob Rees-Mogg. When it comes to criticising ideological extremism, she hasn’t a leg to stand on.