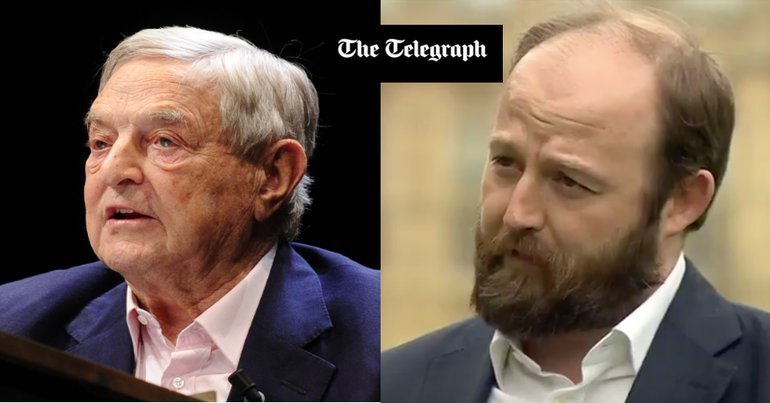 George Soros isn’t a universally-known name in the UK. But in the US, he is the bogeyman of the far right. Trump supporters and right wingers claim the Jewish billionaire is lurking sinisterly behind every liberal campaign and media outlet going. Now, the antisemitic flu has crossed the Atlantic. Because on Thursday 8 February, The Telegraph newspaper published [paywall] this: 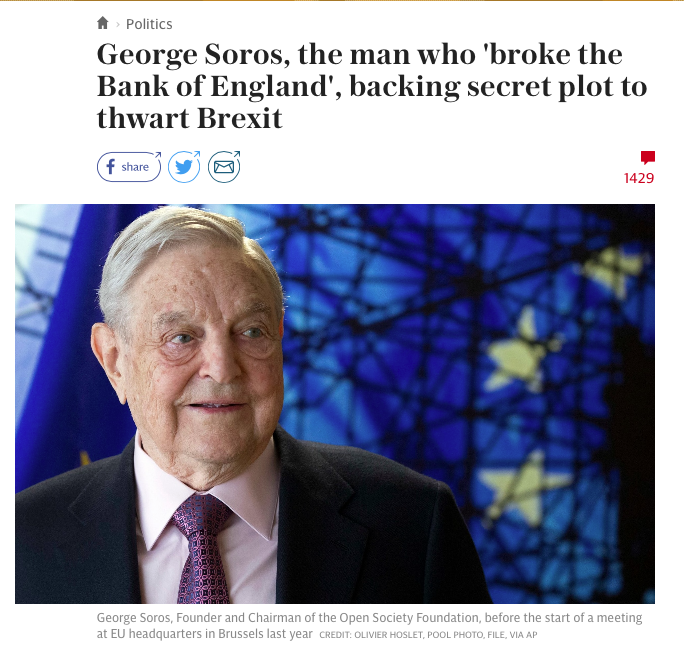 So, The Telegraph article is wrong. But what makes it antisemitic? Put simply, it promotes the long-running antisemitic conspiracy theory that rich Jews run the world. A theory promoted heavily in 1930s Germany, culminating ultimately in the Holocaust. As the Editor of The Jewish Chronicle points out:

Telegraph story is disturbing because of the use of the idea it’s a “secret plot.” Soros is incredibly open about what he does. Say it’s wrong; fine. But idea it’s a secret plot is exactly the line being used in Hungary and elsewhere precisely because he is Jewish.

For a lot of far right propaganda sites ‘Soros’ has become synonymous with ‘Jews’ as a way of smuggling anti-semitic scaremongering under the radar. One assumes the Telegraph is aware of this. https://t.co/KlXC9cLQOp

The lead Telegraph story, jointly penned by Theresa May's ex-chief of staff, alleges a conspiracy led by George Soros against Brexit. It uses a smear campaign by Hungary's dictatorship as evidence.

Call it out for what it is: dog-whistle anti-Semitism.https://t.co/KcRGS6ErCW pic.twitter.com/bfxfCMOQGJ

Odious but somehow entirely predictable that opposing Brexit would eventually get cast into that fave far-right antisemitic conspiracy theoryhttps://t.co/i5xYPxbKLl

But not everyone was bemused. Those on the far right of UK politics celebrated this ‘great unveiling’. And former UKIP leader Nigel Farage led the way.

Glad we are finally talking about the influence of George Soros. Time to wake up. https://t.co/2yxrJP7Lxd

Not entirely sure what all the criticism of @NickJTimothy is this morning. I've read his piece. Seems like good, solid journalism.

But then, we know Hodges has form here. Here’s how Hodges (not Jewish) responded when a Jewish blogger asked him to stop using Judaism as a political football: 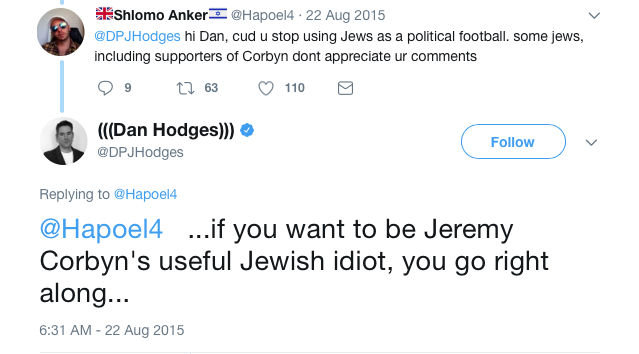 This is a lesson that Britain should not need to learn again. British racists have long demonised the Black community as too angry and too violent. They have decreed all Muslims as time bombs awaiting radicalisation. And they have promoted the conspiracy theory that the Jewish community is too rich and too influential. These attitudes belong in the dustbin of history, alongside signs in windows of bed and breakfasts saying: “No Irish, no blacks, no dogs”.

– Support the work of Hope not Hate.