It's Cameron and his party that are 'Britain-hating', not Corbyn. Here's why - Canary 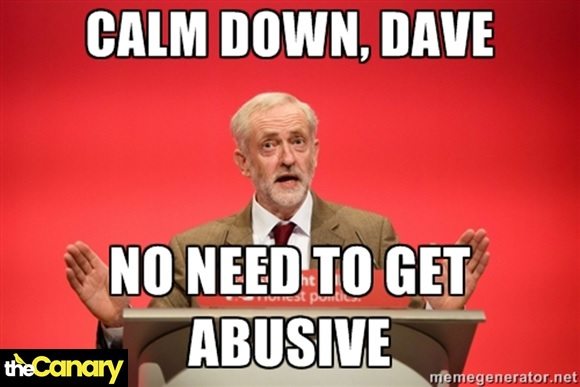 With David Cameron making the abusive and unfounded claim last week that Jeremy Corbyn was “Britain-hating”, it was clear that blind, unthinking nationalism was going to be at the forefront of right-wing critiques of the popular new leader of the Labour Party. Jeremy had supposedly shown his hatred for the British people by refusing to sing a national anthem dedicated to an out-of-date, anti-democratic institution that is an insult to the brave WW2 soldiers who fought against fascism to protect our freedoms.

On the contrary, Corbyn stands up for and advocates the extension of the “mass mobilisation” of unions and activists in order to build “a more democratic, equal and decent society”. At the same time, he rightly criticises the unelected privilege bestowed on institutions like the House of Lords. And, as far as his style and character are concerned, as Frankie Boyle says, he “couldn’t be more British if he bled tea”.

Britain has a rich history of citizen-led movements that fought hard to assure decent living standards for the most vulnerable members of our society. Think of the Tolpuddle Martyrs fighting for the right to form workers’ unions, the victims of the Peterloo massacre demanding the reform of parliamentary representation; and the Suffragettes‘ movement, that finally saw women get the vote.

The reality today however (under the Tory regime) is that the very society responsible for such commendable achievements is under attack.

Taking into account people that did not vote in the election, only 24% of the public put a cross next to Cameron’s name on the ballot paper. His party however, purports to speak for us all in pledging to “cut the benefits of 10 million families” and “scrap human rights legislation”. At the same time, the NHS and mental health services have been pushed into crisis mode by government neglect, and the Tories just sit back and laugh about the “poverty they’re creating”, doing their utmost to ignore the real consequences of their neoliberal mission.

Nonetheless, while the Conservatives fan “the flames of prejudice” against migrants with discourse that is ‘factually wrong’ and lacking in evidence, they claim it is Corbyn who sympathises with terrorism simply for advocating a nuclear-free world, the rule of law, and the rights of the oppressed.

The truth is that the Tories have long supported the traditional establishment view that the oppressive elites around the world are generally in the right and that the oppressed must always be condemned for their resistance – an unsophisticated and erroneous dichotomy which seeks to side-line both reason and context. And the party’s pride in Britain’s repressive colonial history is just one example of this fallacy.

Apparently ‘speaking for working people’, Boris Johnson recently referred to protesters worried about the deteriorating state of society as “a mob of assorted crusties”, showing his clear contempt for poor people who express their discontent. The Tory routine of arming and sucking up to repressive dictatorships like Saudi Arabia despite calls by Amnesty International not to do so, has shown quite definitively that it does not care about freedom, democracy, or learning from Britain’s own past mistakes. At the same time, the media has all too often failed to hold the government to account on such issues.

To speak about loathing the Tories, however, would be both simplistic and inaccurate. Don’t get me wrong, I hate their attempts to destroy our welfare system whilst protecting corporate tax avoiders, but at the same time I realise that not all Tories and Tory voters are the same, and that it is the polices rather than the people that I despise.

And that, finally, is one of the other elements I love about Britain: when our parliament is at its best and stops jeering for a few moments, it encourages us to respect our opponents and defeat them by debating the facts rather than by insulting them.

Jeremy Corbyn has been at the forefront of promoting the most beautiful elements of British culture, such as “the truly patriotic tradition of standing up against injustice” and the advocacy of calm and reasoned debate, and he must be lauded for doing so. The Conservative Party, meanwhile, ought to be thoroughly ashamed of itself, sinking as it has to the mediocre depths of tabloid propaganda – nurturing the type of ignorance, lies, and abuse that the new Labour leader shuns with pride. In short, Corbyn both loves and loathes the right things about British culture, and I personally see him as nothing other than a fine example of the best our country has to offer.