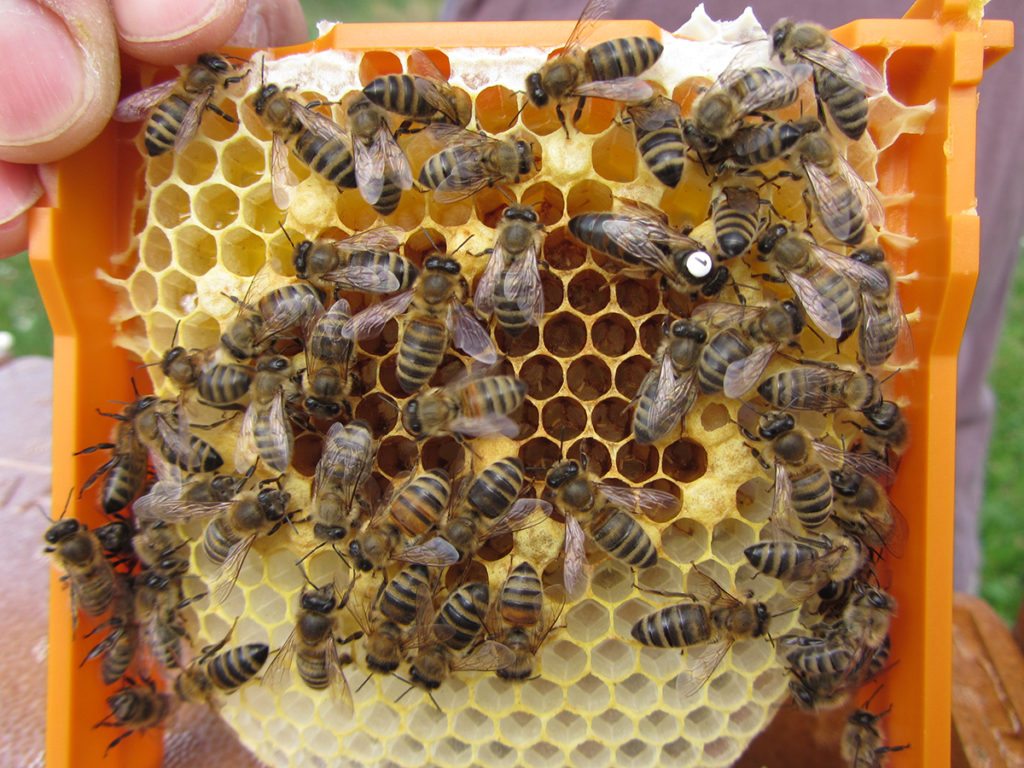 Queen honeybees are severely affected by pesticides, which may explain why the chemicals have such a strong impact on bee colonies. For the first time, a new study led by researchers from the Institute of Bee Health at the University of Bern, Switzerland, shows how two commonly-used neonicotinoid pesticides affect queens, in particular making them reproduce less effectively.

The research gives us a deeper insight into how pesticides affect bees, providing support for widespread bans on their use. But the mounting evidence against neonicotinoids is in danger of masking other factors contributing to bee decline. This could mean we neglect invasive parasites, poor beekeeping, climate change and changing land use, leaving bees vulnerable to these threats.

Honeybees are vital pollinators and are responsible for pollinating some of our major food crops. Several years ago, colonies started to die at an alarming rate, leading to widespread investigations into the causes of the condition, called colony collapse disorder (CCD). This has raised concerns over the impact of bee declines on food security.

Honeybees live in colonies of up to 60,000 bees. The worker bees, which comprise the main bulk of the colony, are directed by a queen bee through pheromone signalling. Recent surveys of beekeepers have revealed that queens have been failing – dying or not reproducing – at increasing frequency, but little was known about the cause.

Neonicotinoid pesticides are used to control harmful insects. However, because of their extensive use, they are found everywhere in the environment, also affecting non-target insects like honeybees and other pollinators. In 2013, governments in Europe partially restricted the use of three widely used neonicotinoids – thiamethoxam, clothianidin, and imidacloprid – while environmental risk assessments were carried out. The ban was temporarily lifted in the UK in July this year, following an emergency application from the National Farmers’ Union, and a new inter-governmental review is due to take place soon.

Queen bees are the weakest link

The team exposed developing honeybee queens to the two pesticides at concentrations likely to be found in the environment. After emerging from their pupa cases, the queens were allowed to sexually mature. The researchers observed their flight behaviour every day for 14 days (queen bees only fly rarely, for fertilisation). They then checked the queens’ egg production once a week for four weeks. Surviving queens were sacrificed so the team could examine their reproductive organs.

Exposure to neonicotinoids also had a physical effect on the queens: the ovaries of those that survived the full four weeks were almost 7% larger than those of the controls. What’s more, the neonicotinoid queens had 20% fewer stored sperm cells and a 9% lower proportion of living versus dead sperm.

[pull_quote_left author=””]… our study suggests that these substances are, at least partially, responsible for harming queens and causing population declines of social bee species.[/pull_quote_left]

The authors concluded: “our study suggests that these substances are, at least partially, responsible for harming queens and causing population declines of social bee species. Failure of queens exposed to neonicotinoids during development to successfully lay fertilised eggs that subsequently develop into workers or queens is worrisome; both castes are vital to colony survival, particularly when emergency queen replacement is needed. This is especially important for wild social bees that cannot rely on human intervention to mitigate effects of queen failure or colony mortality.”

For now, the ban on neonicotinoid pesticides stands across Europe and in Canada, pending risk assessment results. This study certainly supports calls for deeper investigation into pesticides to protect pollinators. However, we shouldn’t get carried away in the fight against agricultural chemicals and neglect other factors contributing to bee decline.

One new research path looks at the honeybee’s “hologenome” – which includes the genome of its resident microbes – to find out what determines survival. By analysing the genomes of the gut microbes living in honeybees and the pathogens that infect them, researchers can paint a full picture of what is happening at a genetic level.

Honeybees are under increasing attack from a variety of deadly pathogens, including bacteria, viruses and parasites. Hologenome theory suggests that an organism evolves along with the microbes it lives with, as a result of environmental factors that affect its survival. In a review of current research, scientists at the University of Maryland and the US Department of Agriculture suggest that in addition to investigating the effect of pesticides on bees, it’s important to look at what’s happening genetically.

“Only by considering the hologenome can we truly interpret and address impacts from the pathosphere, pesticides, toxins, nutrition, climate and other stressors affecting bee health,” say the authors.