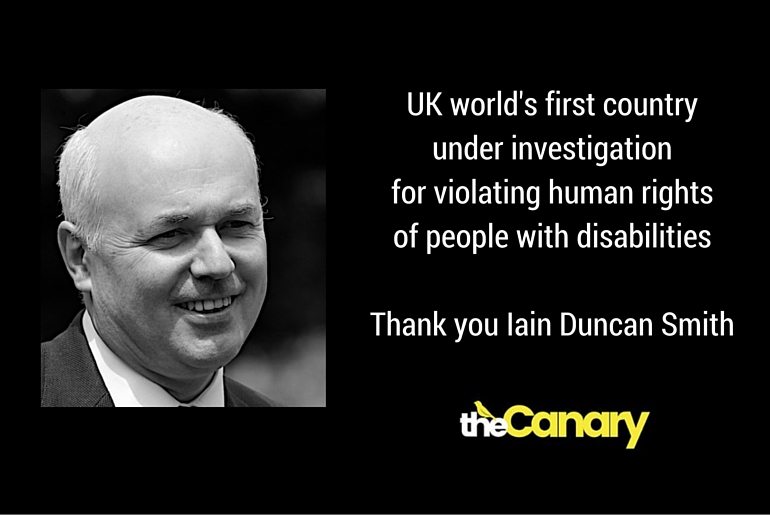 It appears this government is beginning to reap what it sowed, as the UK becomes the world’s first country to face a high-level inquiry by the UN over systematic violations of people with disabilities’ human rights.

The inquiry was launched after the grassroots campaigning organisation Disabled People Against Cuts (DPAC) began submitting evidence in 2012 of ‘severe’ and ‘continuous’ violations of the UN’s Convention on the Rights of Persons with Disabilities (UNCRPD), to which the UK is a signatory. According to a spokesperson for DPAC:

This inquiry is the first of its kind – it has great historic importance.

It means the UN will examine the vicious and punitive attacks on disabled people’s independent living as well as the cuts which have seen so many placed in inhuman circumstances and have led to unnecessary deaths.

Figures released by the Department of Work and Pensions (DWP) this summer show that between 2011 and 2014 over 2,500 people have died within weeks of being declared ‘fit for work‘. A further 7,200 people also died after having their benefits reduced and being put in groups to help them prepare for a return to work.

This inquiry is clearly a very sensitive affair, as evidence of such violations would amount to a ground-breaking indictment of the Conservative Party’s austerity program. In fact, the investigation has been ongoing since January 2014, but has remained confidential until very recently, according to Disability News Service.

The cuts to disability provisions that have led to the unfolding crisis have been overseen by the Secretary of State for Work and Pensions, Iain Duncan Smith, who over the years has been steadily weaving a public narrative of benefit dependency and of the ‘liberating value’ of work. This narrative has routinely proven to be fictitious, from claims that homelessness figures are static when in fact they are rising quickly, to publicity campaigns in which the DWP make up fake quotations from would-be benefits claimants, to show how the reformed benefits system should work in practice.

But the work that has been undertaken by groups such as DPAC includes real acts of resistance against the destructive effects of Conservative austerity. DPAC organised a protest in June this year, during which disabled campaigners attempted to break into the House of Commons during Prime Minister’s Questions, in order to protest the government’s planned £12 billion cut to the welfare budget. For a multitude of reasons, experiences of disability and disablement are under erasure in our society, not least because politicians such as Iain Duncan Smith don’t consider disabled people to be ‘normal‘.

At the risk of sounding overly-optimistic, the UNCRPD’s inquiry could signal the start of a shift in public perspective; this country has started to forget that people with disabilities are citizens with full human rights. The inquiry might serve as a timely reminder.