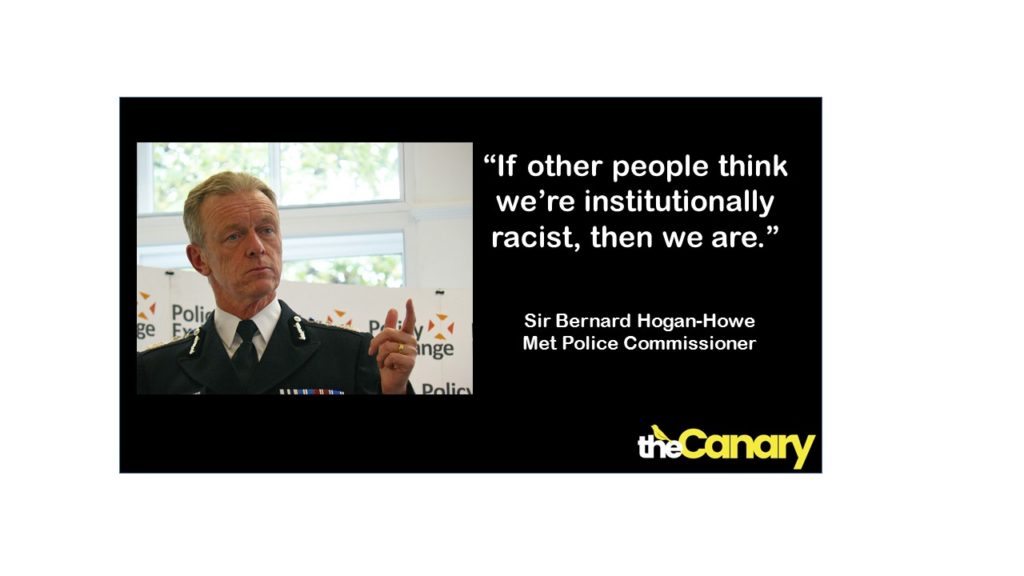 There have been more allegations of the tragic consequences of police racism after reports that PC Alan Paton, one of the officers involved in the arrest and subsequent death of Sheku Bayoh, had a history of violence and racism having stated he “hates black people”.

Bayoh died after an arrest in Scotland in May involving CS Spray, batons, handcuffs and leg restraints. Eye witnesses reported officers kneeling and lying on him. Following his death, the police claimed he had a knife, and they believed he was a terrorist threat.  CCTV evidence showed there was no knife. It is anticipated an upcoming pathologist report will say he died from positional asphyxia.

Two days earlier, figures released from the Home Office revealed black people are three times more likely to be tasered than white people. Meanwhile, research this week from the London Campaign Against Police and State Violence has shown 240 complaints made against the Metropolitan police in the last year, with none being upheld.

None of these tragedies, incidents or figures can be looked at in isolation. There can be no excuses for statistics and evidence showing such systematic racism across UK police forces, with even Met Commissioner, Bernard Hogan-Howe admitting black men were “very much more likely” to be stopped and searched, and that he couldn’t “explain that fully”. He further stated:

If other people think we’re institutionally racist, then we are.  It’s no good me saying we’re not and saying you must believe me.

Sixteen years after the Macpherson report into the police investigation of the death of Stephen Lawrence concluded there was institutional racism in the police, it is clear not much has changed. The police cannot be trusted to investigate themselves, and there is still no accountability or justice for those who have lost loved ones, suffered assaults or been harassed due to the colour of their skin.

Action is needed to ensure radical and lasting change, and as the London Campaign Against Police and State Violence state:

This racial bias cannot be blamed on individual rotten apples, the consistency of disproportionate racist outcomes means that the entire barrel is suspect.  We need radical structural reform of the police and the criminal justice system, not merely tough talking against officers using racial slurs.