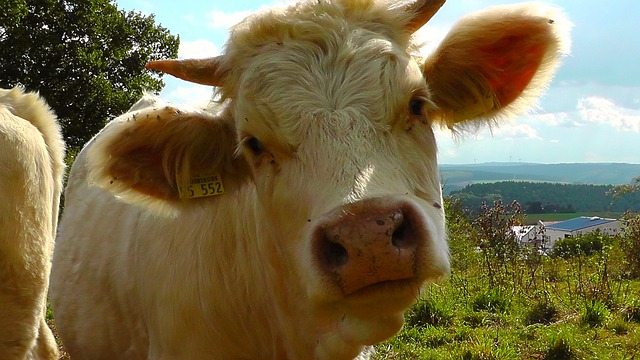 But could cruelty-free ahimsa dairy products, based on Hindu ethics and high welfare practices pioneered by a handful of British farms, save the industry from disaster?

To understand how a different way of doing dairy can solve this crisis, we need to trace the problem back to its roots.

On 31 March 2015 the European Union lifted its quotas limiting milk production. First enacted in 1984 this measure ensured the survival of rural dairy farmers by limiting the amount of milk that could be produced EU wide. It kept prices higher than they would be otherwise and spread the production across many smaller producers.

But from March, dairy farmers have been told to compete in the free market. This is supposed to give them “flexibility” and drive exports, but the result has been disastrous here in the UK, which sees higher costs of production than other parts of the EU.

Other factors include the economic sanctions placed on Russia over its Ukraine intervention, huge production from places like New Zealand and a price war between British supermarkets all trying to sell the cheapest milk.

Put simply, the problem is overproduction – we are drowning in milk. Could it be time to end this obsession with quantity, and shift over to a focus on quality? Not just good quality milk, but a good quality of life for the cows too.

Ahimsa is an Indian Sanskrit word meaning “without violence” – it is a spiritual principle of Hinduism and forms the basis of the Ahimsa Dairy Foundation’s process on their farm in Leicester. There, as well being free-ranging and raised on organic principles, no cow, calf or bull is slaughtered when they are “no longer useful”. Unlike conventional farming, the calf is not immediately separated from its mother following birth, but stays with her for 6 months. After that it is ready to be separated and the mother cow will continue to give milk for several years. After the end of their productive life the cows are “retired” to live out the rest of their lives in peace.

Sounds idyllic doesn’t it, but how would this help save the dairy industry? Well, due to EU rules stipulating a single common market, we cannot simply enact a law that says British shops must buy from British dairy farmers, even though this would provide a short term solution.

However, if we brought in new high standards for cattle welfare, including some of the methods outlined in the ahimsa process, and demanded that all milk products sold in Britain carry this “stamp of approval”, then essentially UK farmers would have no competition from abroad. British milk would become a product set apart from others, commanding a higher price abroad and a free-run at home.

In addition, because the high welfare methods sacrifice production in favour of quality, it would mean an end to the chronic over-supply plaguing the industry. The cruelty-free milk costs more of course, but that’s the point – at the moment its price is so low it’s unsustainable.

Britain has always put a high value on animal welfare. We love our pets and take pride in our countryside, so why not take the next step and remove the suffering and hardship from the lives of our animals? We will reap the benefits in terms of public health, tastier milk and an international reputation for kindness, while saving the dairy industry and giving a new lease of life to British farmers.