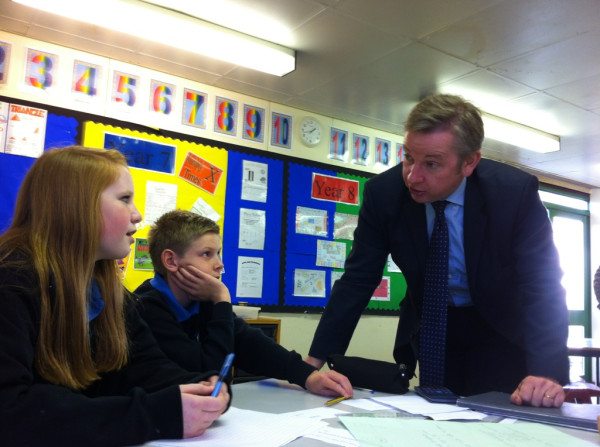 Education is key to every society and the policy of the day determines how education develops. Politicians are therefore keen to paint a veneer of commitment to the education of our children and one way they hope to do this is by including schools as an essential photo-shoot opportunity on their PR schedule. When recently approached, headteacher Colin Harris refused to play their game of politics over principles.

Mr Harris, headteacher at Warren Park Primary School, recently received an invitation to host a visit from Tory MP Alan Mak, the newly elected representative for Havant. Rather than playing the sycophantic game of politics, he responded with an open letter rejecting the visit. In it he said:

We are now a true political football to be knocked around for the pleasure of both the media and the government at the expense of the future of our children.

He is not wrong. Years of Conservative and Coalition education policy have proven that.

Ever since Margaret Thatcher’s 1988 Education Reform Bill moved the goalposts away from the 1944 Education Act, which offered free and universal schooling, successive governments have played with education. They’ve bounced the ball from one player to the next, not even appearing to care much where it landed.

The 84-page Conservative manifesto of 2015 makes no mention of education until page 18, and then only with reference to long-term youth unemployment. Later on the same page they promise to “tackle the disproportionate impact of strikes … in education”. There’s nothing about education having anything to do with giving children a good start in life until page 35.

The grounds for Mr Harris’ refusal to host a visit are clear in the context of the recent game-playing with education, citing specifically:

My views on academies, free schools, lack of funding, assessment, Ofsted, pay rises, curriculum reform, and the demise of local authorities will, of course, be different to yours.

The Tories’ contempt for education and regard for it as anything other than a political football has been amply proven over recent years in the Coalition. It is only two years since the National Union of Teachers’ unanimous vote of no confidence in the previous education secretary Michael Gove. He famously referred to key players in the teaching profession, including unions, local authorities and teacher training colleges, as “The Blob.”

Gove introduced National Curriculum reforms, business-funded politically-driven controversial academies which allow unqualified teachers to be recruited. The cost advantages of young teachers have become more attractive and caused the loss of experienced staff, many of whom are keen to leave the profession, according a recent NUT YouGov poll which reported that:

53 per cent of teachers are thinking of leaving in the next two years.

Nicky Morgan’s appointment in a cabinet reshuffle in July 2014 was undoubtedly a move, ahead of the general election, to overcome what Tory strategist Lynton Crosby called Gove’s “toxic” public image. But as Christine Blower, General Secretary of the NUT, put it earlier this year:

The Education Secretary has made much of her commitment to social justice, but it is a fact that the policies and actions of the Coalition Government have done much to exacerbate the problem. Regrettably, the present Conservative Government promises more of the same.

That means that Mr Harris’ lament will persist:

[Teachers] have no forum to actually get people to listen to us.

The rules of the education game are designed to see schools as cost-effective enterprises, with marketing budgets and league tables. Parent choice is the mantra in a bustling consumer-driven market place, stimulating the economy by frantic house moving to get into the “best” schools. We’re breeding a generation of children who believe their only value can be measured in terms of exam success, while education professionals are side-lined like cheer leaders as politicians kick the education football around with vigour. You can understand the headteacher’s reluctance to participate in the PR circus.

Mr Harris’ refusal to sit on the sidelines was clear in his response to Mr Mak’s proposed visit:

I have to decline the visit until such time as the government really and truly cares about the future of education.

Anyone who, like Colin Harris, cares about education, our children and their futures can recognise the need to join him in calling for an end to the game-playing, and focus on the needs of our young people and their development.