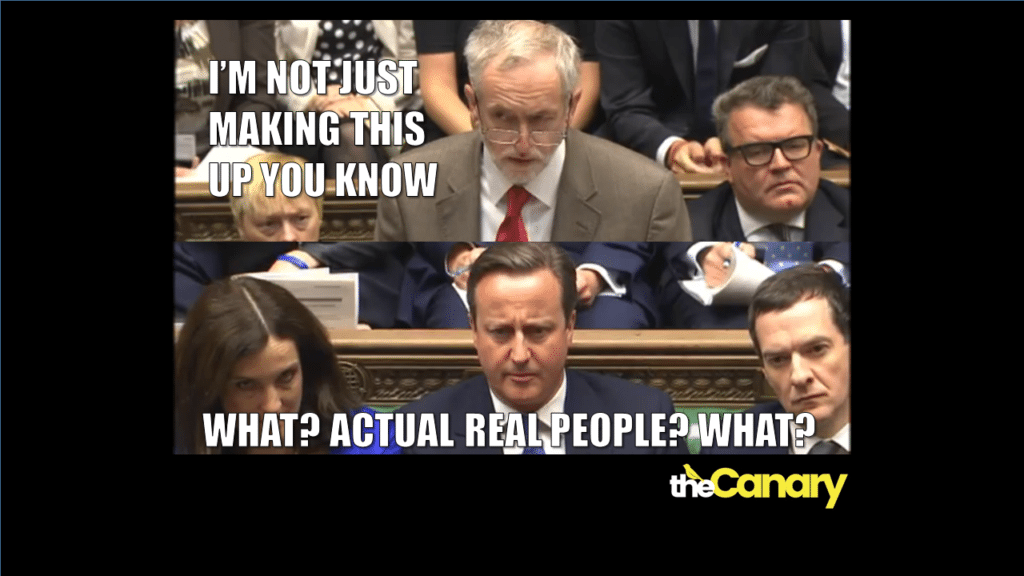 “I’m one of the luckier ones,” says Kelly Ward, 39, a Nursery Manager from Lancashire who stands to lose £1,800 a year due to George Osborne’s Tax Credit cuts.

A single mum with a disabled teenage son, Kelly is already earning £7.20 an hour, the so-called Living Wage which will come into force next spring. Although a lifelong Labour member, she told The Canary:

Look Mr Prime Minister, if you can actually tell me how I will be better off next year, I will gladly vote for you. The government should be for everyone, not just the very rich or the very poor.

She is exactly the kind of straightforward working person that we’re constantly told holds the key to elections. But yesterday David Cameron made her feel like she doesn’t exist.

Nowhere is Jeremy Corbyn’s determination to do politics in a new way more visible than his approach to Prime Minister’s Questions, hitherto a weekly knockabout farce in which rival party leaders play to the gallery while speaking loudly about very little. By crowd-sourcing his questions, Corbyn has brought ordinary people into the heart of the legislative body that supposedly takes decisions on their benefit. It’s an approach clearly designed to show up Cameron’s lack of connection with real people and yesterday the PM was thrown into a tailspin as he floundered around for numbers that would somehow add up to good news for Kelly.

Clearly, Cameron can’t be expected to understand and analyse all the facts of Kelly’s situation with 30 seconds’ notice, but by simply spewing a bunch of excuses that had no relevance to her life he made her seem like a theoretical case-study, not a person. She clearly doesn’t fit into the Treasury’s model of someone affected by the lowering of the Tax Credit threshold:

We’re bringing in the National Living Wage, which will be a £20 a week pay-rise for…

…obviously Kelly will benefit as that rises to £9.00…

By 2020. That’s less than 5% per annum. Energy bills are rising more than twice as fast.

…next April we raise to £11,000 the amount you can earn before you start paying taxes…

…Kelly, if she has children, will be benefitting from the 30 hours of childcare that we’re bringing in…

Well her question began, “I’m a single mum to a disabled child”. Maybe Cameron was so embarrassed by the laughter from his own backbenchers at this statement that he quickly flushed it from his mind. Anyway, as it happens, Kelly’s son is in full time education so the childcare issue doesn’t affect her.

…I don’t know all her circumstances but if she’s a council housing or housing association tenant, we’re cutting her rent…

She isn’t, but if she was, the new policy (a U-turn expected to hit the supply of social housing) would save less than a fiver a month. Fortunately, Kelly has “a really good private landlord” so her rent isn’t unmanageable.

…All those things are important…

All those things, Mr Cameron, don’t amount to a hill of beans.

Cameron’s response to being calmly informed by Corbyn that Kelly would be £1,800 a year worse off as a result of next April’s changes was to go into a full-blown rant about work being the best route out of poverty and everyone benefitting from “economic stability”. Kelly’s reply to that is: “I’ve never felt less stable.” Her biggest gripe, however, is the feeling that Cameron seemed incapable of demonstrating that he thought of her as a real person. She admits to initially wondering if Corbyn’s questioners were artificial cyphers, fictional people intended to represent real issues, and part of her reason for submitting a question was to test this theory. Certainly, the Conservatives are familiar with such tactics but Labour are adopting a more genuine approach and the dose of reality is proving strong medicine for Cameron and his government.