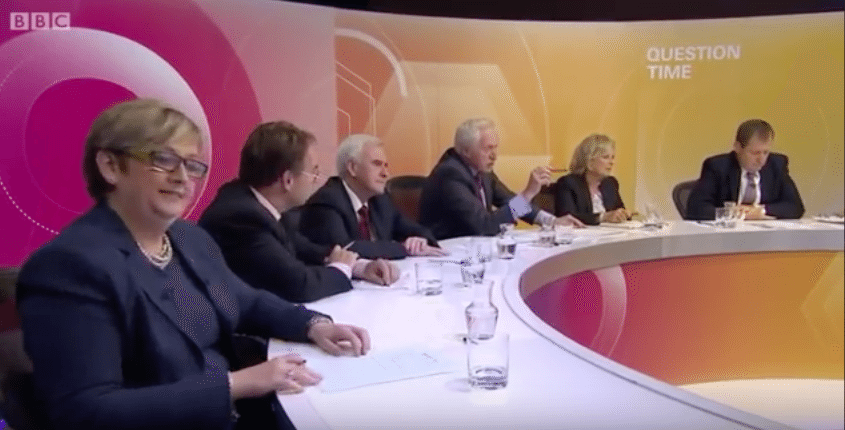 BBC Question Time on Thursday 15 September was car crash television, which became so morbidly self-destructive that audiences in the studio and at home could only shake their heads in horror.

What the show became was a BBC-hosted 21st-century colosseum, where McDonnell was fed to the lions. The sight of a former Blair spin doctor uniting with a Daily Mail hack and a Conservative MP to pile onto Labour’s Shadow Chancellor, while Labour MPs cheered them all on through social media, was a new low point in a summer which has taken silly season, fed it steroids, and fitted it with rocket boosters.

Campbell sat back, barely concealing his glee, while Soubry made an astonishing personal attack on McDonnell, calling him a “nasty piece of work”, and claiming the Labour MPs who are conducting a coup against their own membership and leadership are being “terrorised by McDonnell and his cronies”. And those same Labour MPs took to Twitter to praise the Conservative MP’s assault on their own Shadow Chancellor.

Former Channel 4 News journalist Paul Mason challenged that behaviour, and got this response:

she spoke the truth tonight. Are you happy to be propping this disgrace up?

The entire show ended up being devoted to personal and undignified attacks that rarely elevated to the level of political ideas. Indeed, when John McDonnell attempted to take it there when analysing the reasons for the coup and the real battle underway in the Labour Party, he was cut off with a bizarre interjection by host David Dimbleby, who reminded the audience that McDonnell once described himself as a Marxist. As if this should somehow disqualify him from holding an opinion.

It was a mess. The SNP’s Joanna Cherry spent the majority of the show in a stunned silence, giving ‘WTF?’ looks to the audience, which frankly, was the most human response of the night. Her expression seemed to read: ‘I thought this was supposed to be a political debate, not a punch up down the local.’ But this didn’t save her from the usual SNP-bashing.

The reaction of viewers at home sheds light on the utter embarrassment many are beginning to feel with a political class which simply cannot accept that it’s out of step with the public in a very real way.

That #bbcqt was a shocking spectacle. I don't think I've ever seen such a personal attack on an individual

Unimpressed by the SNP bashing on #BBCQT. They are a credible party and put Labour to shame in Scotland. SNP victories demonstrate democracy

For a Member of Parliament to speak about another as Anna Soubry did last night on #bbcqt is repugnant. for another to praise it, is as bad.

I watched #BBCQT again last night as I thought I might have been over-reacting. No such luck. It was pure bile and poison from Campbell.

Whatever the mainstream media, mutinous Labour MPs, or Anna Soubry think, McDonnell was right in at least one regard: Campbell was instrumental in creating the very distrust and disaffection which drove five million Labour voters away from the party, lost them the general elections of 2010 and 2015, and saw them run out of Scotland by the SNP.

Those who want Blairism can get it today by voting Conservative. Those who are at the devastating effect of Blairism need someone else to vote for – and that means new political ideas which challenge the social, political and economic status quo.

Whether you back Corbyn or not, whether you back the SNP or not, and whether you back UKIP or not is irrelevant to what’s happening in politics right now. Anyone who considers themselves a democrat – someone committed to a real democracy based on a battle of diverse political ideas – must not endorse those alternative choices being smeared and suppressed by the establishment.

The Labour coup attempted to bypass the membership to topple Corbyn; then fought to prevent him from being on the ballot for a new leadership election; then launched a smear campaign against him and the members who support him; and then began actually purging pro-Corbyn members from the party. Can you imagine the reaction if this same coup had been conducted by the left-wing of the party? There would be uproar.

Instead, the political loyalty of the pundit class to the instigators of the coup means that, despite Corbyn and his supporters being the victims of an anti-democratic process of smear and bullying, they are re-cast as the perpetrators – hence the endorsement of Soubry’s “nasty piece of work” assault.

Those millions of people returning to engagement in politics from the wilderness years of working class (and anti-neoliberal) voter disaffection have been met not with a welcome mat, but with a bed of nails. Such a hostile and distasteful experience might tempt some to go into full reverse. But they shouldn’t. They should consider this the painful third stage of battle, as described in the famous quote often misattributed to Gandhi:

It is not in spite of, but because of the despicable shenanigans of our over-stuffed political and pundit class that people need to get involved and stay involved. This system is broken, and those who broke it are unwilling and unable to fix it. So it’s on the electorate and the new media to take the place of these broken institutions, and begin the busy and delicate work of recreating ourselves in a better state.

We have over a million people dependent on food banks to eat; almost a million people on zero-hours contracts who don’t know where their next paycheck is coming from; we have sick and disabled people suffering grinding poverty due to welfare cuts; we have the education system being so under-funded and poorly managed that 50,000 teachers have quit in the last year alone; the NHS is being ripped apart and sold off in chunks while private companies have non-medically-trained receptionists deciding how to prioritise patient treatment; and now we are facing Brexit and all the questions that come with that.

We need a political and pundit class which is focused on the public interest, and what we have is a bunch of inadequates focused on their own self-interest, who come down like a plague on any political party or individual who threatens their empire. This will not do. We deserve better than this, and it is time that we demand it.

– You can read and support new media outlets who will represent these ideas fairly. Please add more that you like in the comments.