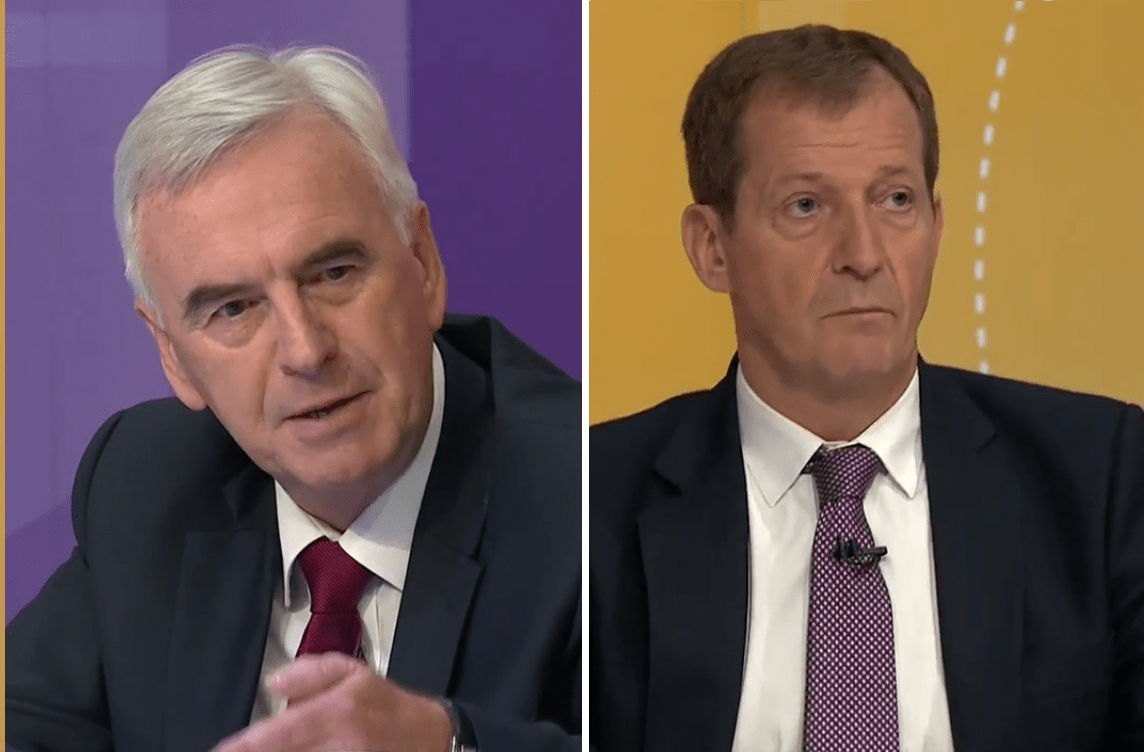 As Campbell claimed the public should want a rerun of the ‘free market’ economics of New Labour, McDonnell interjected to set the record straight:

As a response to rising inequality in Britain, Campbell said the public:

should not be looking for something that different to the politics we tried to give to the country.

Oxfam recently highlighted that the top 1% of Britain’s wealthiest own 20 times as much as the bottom 20% of people.

While Campbell trumpets a return to New Labour as the answer, McDonnell expressed his argument with such an idea:

You’re the person, above all else, who actually created a political environment where no one believed a word a politician said after a bit.

Within a few months of getting elected, Cameron’s Conservatives had begun breaking many of their electoral promises: there’s the severe lack of housing and gradual NHS privatisation, along with cuts to child tax credits and the front-line – to name but a few. At present, Theresa May’s government says it is bringing in boundary changes because of “fairness”. But it is using an outdated electoral roll that includes Conservative voters (usually older people) and excludes Labour voters (often younger people). ‘Fairness’ is a guise for gerrymandering.

But people wary of the Conservative government may feel the same about Labour after the years of Campbell and Blair. Most notable was the invasion of Iraq. Despite claims from the New Labour leadership, there were no weapons of mass destruction and the intelligence behind the claim was botched. Since Blair removed Kuwait’s deadly enemy Saddam Hussein, he has been awarded a multi-million dollar contract from those same Kuwaitis after leaving Number 10.

Labour voters did not only feel betrayed on Iraq. New Labour’s rhetoric on privatisation didn’t match the reality either. As Richard Seymour writes in The Guardian:

Huge swathes of the public felt misled by both Labour and the Conservatives. For McDonnell, Jeremy Corbyn is the antidote to such an environment. As he continued on Question Time:

The reason Jeremy was elected was because they wanted some honesty back in politics again.

Will a return to New Labour policies offset income inequality?

On Question Time, Campbell claimed a return to New Labour was the answer to rising income inequality. But statistics from the Institute for Fiscal Studies, backed by Full Fact, show that Blair and Campbell oversaw the sharpest rise in income disparity since records began in their final term of office.

The rampant privatisation of the Blair years is part of the reason for this. When you privatise public assets, such as NHS services, people still need to use them. So they are forced to rent the services back from the private sector. In turn, this polarises income inequality, as those who own shares in the services get richer, while the majority get poorer.

McDonnell and Campbell also clashed on winning elections. During the exchange, the Shadow Chancellor told Campbell:

You lost us five million votes in that process and set us up to fail.

To which the former Press Secretary replied:

After the financial crash, New Labour’s Gordon Brown managed just 29% of the vote. Similar policies and rhetoric from Ed Miliband yielded Labour only 30.4% of the vote in 2015.

Before the coup started, Corbyn’s Labour had been ahead of the Conservatives three times in the polls and joint once. From a poor start when he was first elected, the Labour leader had been making gains.

The Conservatives hold all the cards when it comes to the mainstream media. Rupert Murdoch’s News UK controls one third of our national newspapers, 70% of which are owned by just three companies. But Labour has the advantage when it comes to party membership. Its grassroots base must be utilised to subvert a largely Conservative media.

Under Corbyn, the Labour Party is now approaching 600,000 members – easily surpassing Blair’s peak of 405,000. It is now the largest political party in Europe.