Nigel Farage is back from retirement, and he's declared war on UKIP [VIDEO] - The Canary 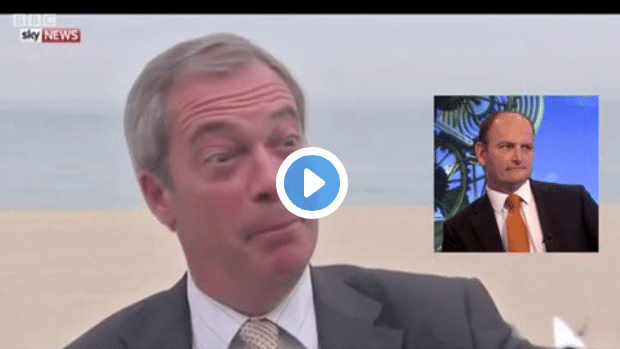 Nigel Farage quit his role as leader of the UK Independence Party (UKIP) after victory in the EU Referendum earlier this year, but he has now made a comeback to join a civil war which is engulfing the party.

Nigel Farage doesn't know why you joined UKIP. Can you remember why you joined? @DouglasCarswell is asked by @afneil https://t.co/nrb4xRTII2

In an interview with Sky News, Farage claimed he had no idea why Clacton MP Douglas Carswell had joined the party, and that Carswell doesn’t share in the party’s aims and ideals. The former UKIP leader is visibly red-faced in the interview, and his voice breaks at several points.

Responding to the interview on the BBC’s Daily Politics show, Carswell explained the civil war which is underway in UKIP today. There are two UKIPs. One is a libertarian, hyper-capitalist party which criticises the establishment from the point of view US Republicans would find familiar – regulation is bad, public ownership is bad, taxes and government should be as small as possible, and the private sector is a force for democracy. That wing sees itself as UK Republicans.

The other UKIP is anti-establishment in the sense that it attracted disaffected working class voters who felt immigration was the cause of their job insecurity, decreasing pay, and the failure of public services (rather than the machinations of the New Labour and Conservative governments in creating scarcity – through deliberate underfunding and indebting services – as a ruse to sell them to the private sector). They are refugees from the labour movement which was ditched by New Labour. They are pro-public service and pro-welfare state, they want to see corporations and wealthy individuals paying their fair share of tax, and they want to feel that the borders are under control.

During his leadership, Farage courted both these groups by telling them whatever they wanted to hear and ignoring the question of how exactly this thing would hold together in the longer term.

These two parties are incompatible, but were previously held together by one powerful unifying force – their hatred of the EU. The problem is that, now Brexit has been assured, the party no longer has this vendetta to keep the two wings focused on an external enemy greater than their own vast differences. The cracks are beginning to show, and the party is facing a showdown among donors, members, and leadership – and the truth is, no one knows who will win.