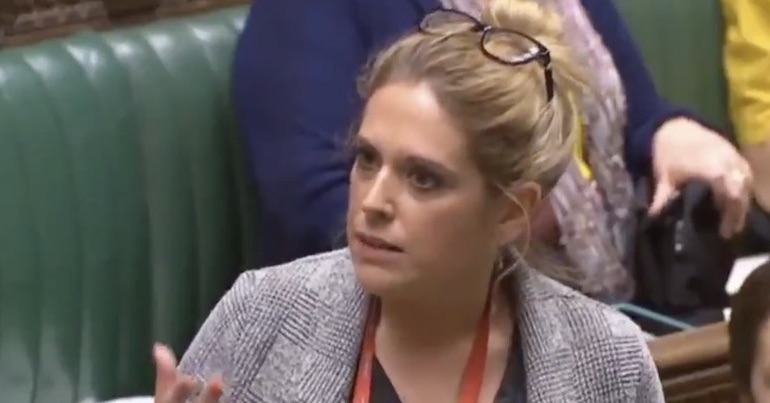 On 19 December, Labour’s Laura Smith tore into the “disgraceful insults” constantly thrown around parliament by Conservative politicians. And as the MP for Crewe and Nantwich tried to speak, she was jeered and mocked from the other side of the Commons. But she stood her ground to make her point with absolute impact and poise.

Smith asked Commons speaker John Bercow if he could “advise” her as a relatively new MP on how to explain Tory parliamentary conduct to her constituents. But she got no further because Conservative MPs erupted in shouts and jeers. As she paused, shadow foreign secretary Emily Thornberry called out “Don’t let them shout you down”. Smith replied “I won’t”, but it took some time before she could continue:

Because the level of hypocrisy in this place is quite astounding… we have to put up with the most disgraceful insults thrown at us. And nobody more so… than the leader of the opposition who has to put up with it day in, day out.

Laura Smith: "The level of hypocrisy in this place is quite astounding! On this side we have to put up with the most disgraceful insults thrown at us, & nobody more so than Jeremy Corbyn, who has to put up with it, day in day out!"

Thornberry supported both Smith and fellow Labour MP Laura Pidcock in the Commons that day:

I loved how a voice -is it @EmilyThornberry ’s?- kept saying to @LauraSmithMP : ‘don’t let them shout you down’
Also I heard the same voice saying to @LauraPidcockMP amid the shouting in Parliament today: keep going..
This is what I call #feminism in action 👏🏼 https://t.co/dBRFw1Af8E

Yep, I was proudly supporting these two brilliant new Labour women MPs, as they spoke out against Tory nonesense in the chamber and were fearlessly having to face down terrible barracking as they did so. #proudtobeLabour 🌹♀️

Lots of lovely people getting in touch with me about the heckles and jeering from the other side.Don’t believe the Tories faux outrage-I could list countless times they have shouted abuse at all of us on the opposite benches.Hypocrites of the worst kind.#dontletthemshoutyoudown

Her comments came on the same day that Labour leader Jeremy Corbyn had to defend himself against a muttered comment and outrage about something he didn’t even say. And when the Tories start smearing Corbyn, the UK’s mainstream media dutifully amplifies them:

The Conservative Government are currently destroying Britain, ripping apart at the few remaining fabrics that bind society together, yet #Newsnight leads with something Jeremy Corbyn didn’t say. Pathetic.

Smith was making a powerful point. Because insults have been flying out at Corbyn since he became Labour leader. As The Canary reported in October 2015, former prime minister David Cameron claimed Corbyn was “Britain-hating”. And just a couple of months later, he called the Labour leader and anti-war colleagues “terrorist sympathisers”. Countless times, Corbyn has been unable to continue a speech in parliament because of Tory insults. Once these are thrown, the Conservative benches disintegrate into howls of public-school laughter.

And it’s not just Corbyn who’s suffered. Outside the Commons, Labour’s Diane Abbott has “had rape threats, [and been] described as a pathetic, useless fat black, piece of sh*t, ugly fat black bitch and n*****. N***** over and over again.” She has received more “racist tweets and online racism” than any other female MP. Looking at behaviour inside the Commons, meanwhile, it doesn’t take much to connect the Tories’ continued rudeness towards Labour MPs with this shocking racist abuse. Because, as Smith showed, there’s no respect when Labour MPs speak.

Smith’s comments were spot on, as many pointed out:

Just brilliant. I came home tonight to yet another round of fake news, fake words & faux outrage peddled by a right wing media circus intent on destroying Jeremy Corbyn, and this MP has given me reason to be cheerful. Thank you @LauraSmithMP pic.twitter.com/dfErxCqp0b

The hypocrisy extends on to their media today, front page fake outrage because @jeremycorbyn called the braying mob "Stupid people". #dontletthemshoutyoudown @LauraSmithMP Their behaviour in Parliament is a disgrace, we pay for this and it is a laughing stock. https://t.co/54gwFSsmGU

Even a Daily Mail reporter was impressed:

Her name is Laura Smith and she's one of the best we've got on our side! @LauraSmithMP https://t.co/PbpFeUhlc3

Unlike the braying Tories, Smith remained poised and eloquent despite Tory jeers. That’s proper politics. And Smith smashed it.