Guilty by innuendo: the Guardian campaign against Julian Assange that breaks all the rules - Canary 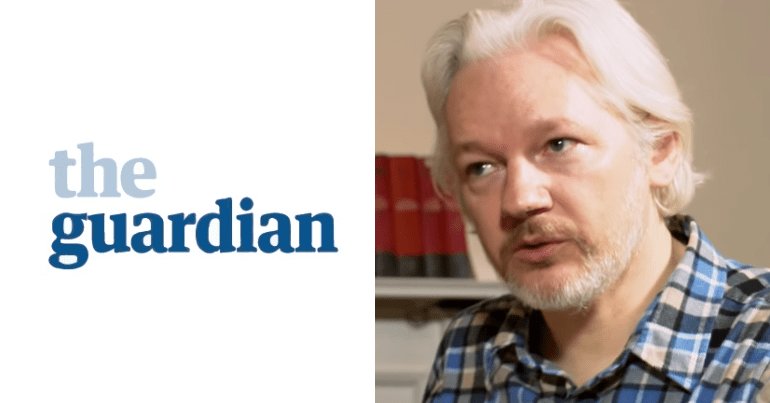 An analysis of articles published by the Guardian over several months reveals what appears to be a campaign to link WikiLeaks founder Julian Assange with Russia and the Kremlin. But the paper has provided little or no evidence to back up the assertions. And amid recent revelations that Guardian journalists have associated with the psychological operations experts at the Integrity Initiative, we should perhaps be more sceptical than ever before.

This particular campaign by the Guardian appears to have begun with an article on 18 May 2018 from Luke Harding, Dan Collyns and Stephanie Kirchgaessner. It stated that “Assange has a longstanding relationship with RT”, the Russian TV broadcaster; and the headline was Assange’s guest list: the RT reporters, hackers and film-makers who visited embassy. Assange has had hundreds of people visit him at the embassy, but the article was keen to focus on the “senior staff members from RT, the Moscow TV network described by US intelligence agencies as the Kremlin’s ‘principal international propaganda outlet’”.

On the same day, the Guardian published another article, claiming that Assange had visits from “individuals linked to the Kremlin”, but which offered no evidence for this.

On 20 June, Harding and Kirchgaessner wrote a story focusing on “Assange’s alleged ties to Russia”. It claimed that “a longtime US lobbyist for the Russian oligarch Oleg Deripaska visited Julian Assange nine times at the Ecuadorian embassy”. Yet the article’s sub-heading stated: “It is unclear whether Adam Waldman’s 2017 visits had connection to Oleg Deripaska”. Waldman is a lawyer, and visited Assange in that capacity.

All these articles followed an opinion piece on 29 March by James Ball, who rhetorically asked if Assange was “working with people at the top of Putin’s government”.

In the US, special counsel Robert Mueller is investigating alleged Russian interference in the 2016 US election and the release of thousands of files from the US Democratic Party. The Guardian’s coverage of this has also attempted to convey that Assange knowingly sourced information from Russian intelligence. On 16 November, Jon Swaine and Stephanie Kirchgaessner wrote that “the July indictment [by Mueller] said WikiLeaks urged the Russians to give them the first batch of stolen emails”. This implied that WikiLeaks was working with “the Russians”. Then, on 27 November, Harding and Collyns wrote that “WikiLeaks emailed the GRU [Russian military intelligence] via an intermediary seeking the DNC material”. Nick Cohen similarly wrote on 7 October that “GRU agents passed 50,000 documents from the Clinton campaign to WikiLeaks, which presented them as the product of its own investigations”. Again, this all inferred that WikiLeaks was in contact, or actually conniving, with Russian intelligence.

On 17 October, the Guardian carried a story from Associated Press, mentioning “Assange’s relationship with Russian authorities”. It offered no evidence for this “relationship”, other than claiming there was “a growing body of evidence suggesting he [Assange] received material directly from Russia’s military intelligence agency”. Precisely what “growing body of evidence” it was referring to was unclear.

On 22 October, a Guardian opinion piece by Kathleen Hall Jamieson asserted that “it is now clearer than ever” that “the Russian cyber-theft” of thousands of Democratic Party emails was “abetted by Assange’s WikiLeaks” – the suggestion again being that WikiLeaks had been conspiring with Russia. Not even Mueller has claimed that WikiLeaks was involved in any hack of the emails.

The Guardian also tried to link the Mueller investigation to its RT story. On 6 December, Stephanie Kirchgaessner and Jon Swaine wrote:

The special counsel’s alleged focus on RT is important because the Russian news channel also has a close relationship with the WikiLeaks founder Julian Assange… [RT journalist Afshin] Rattansi’s August 2016 interview of Assange was alleged to have been part of Russian propaganda efforts aimed at boosting Trump and denigrating Clinton”.

And on 20 November, the Guardian published a story stating that “Russian Twitter trolls… have begun to advocate on behalf of Julian Assange”.

Then there are the accusations of flat-out “fake” stories

All this is in addition to two recent Guardian stories that faced accusations of being fabricated.

On 27 November, the Guardian published a story on its front page – written by Harding, Collyns and Ecuadorian journalist and former anti-government activist) Fernando Villavicencio – claiming that former Trump campaign manager Paul Manafort had held three secret talks with Assange in the Ecuadorian Embassy. (Note: As The Canary reported, Villavicencio’s name appeared on the print version but was not present on the web version.)

But in an exclusive interview with The Canary, former consul and first secretary at the Ecuadorian Embassy Fidel Narváez refuted that story. And a variety of media outlets, including the Washington Post, subsequently ridiculed it. The article also sought to link Assange to Russia, stating:

A well-placed source has told the Guardian that Manafort went to see Assange around March 2016. Months later WikiLeaks released a stash of Democratic emails stolen by Russian intelligence officers.

An earlier Guardian story – written by Harding, Kirchgaessner and Collyns and published on 21 September 2018 – was headlined Revealed: Russia’s secret plan to help Julian Assange escape from UK. The article claimed that it “raises new questions about Assange’s ties to the Kremlin”. Narváez also described that piece as a “fake story” in his interview with The Canary. And because the Guardian named him as the link to Russia in the article, the former diplomat has accused the Guardian of causing “irreparable damage to my reputation” and has demanded an apology.

Simply referring to ‘unnamed sources’ (as in the article about the supposed Manafort visits) is just not good enough in the age of fake news. For this reason, The Canary followed up the Guardian story on Manafort by suggesting likely sources: namely private intelligence contractors organised by Ecuadorian intelligence (Senain), reportedly with some help from Villavicencio. The Guardian, meanwhile, has largely failed to defend its claims.

On the matter of sources, it’s important that journalists are careful with whom they associate. For example, Guardian commentator and BuzzFeed writer James Ball spoke at an event promoted by the controversial Integrity Initiative, which claims to specialise in ‘counter-disinformation‘. So did Guardian/Observer journalist Nick Cohen. And at least one other Guardian journalist spoke at that event too. Other mainstream media journalists, meanwhile, are also listed in Integrity’s ‘UK cluster’ activists document (seen by The Canary).

The question that we now need to ask is: if the Guardian story about the Manafort visits was untrue, then how many more claims against Assange in the articles quoted above were also untrue? If the paper had given hard evidence in the first place, we wouldn’t need to ask that question. But it didn’t. So we do.

The Canary contacted the Guardian for comment. But it hadn’t responded by the time of publication.

Whatever the Guardian‘s rationale behind its articles on Assange, they will undoubtedly help to create a hostile climate towards the WikiLeaks founder. And that in turn may enable Ecuador’s new government, at the behest of the US and the UK, to push him out of the embassy in London, leaving him to face potential or likely extradition to the US.