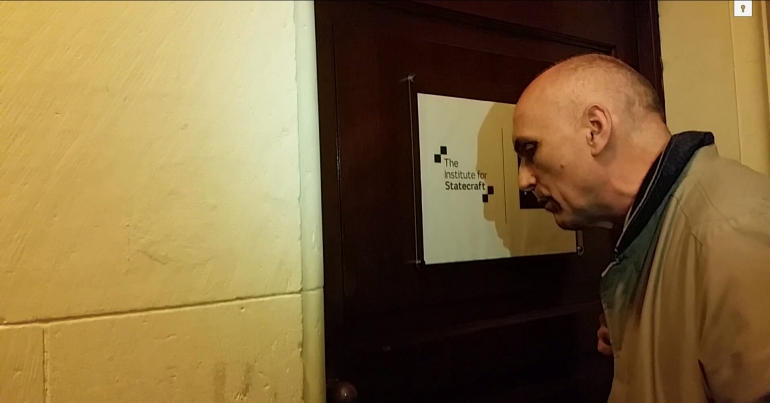 Mohamed Elmaazi accompanied Chris Williamson MP as part of an ongoing investigation by The Canary and the Grayzone Project into the activities of the Institute for Statecraft.

Chris Williamson MP visited the alleged ‘psyops‘ organisation the Institute for Statecraft (at The Temple, near London’s Embankment) on the morning of 19 December 2018. Statecraft is funded by the Foreign and Commonwealth Office (FCO) and Ministry of Defence (MOD). 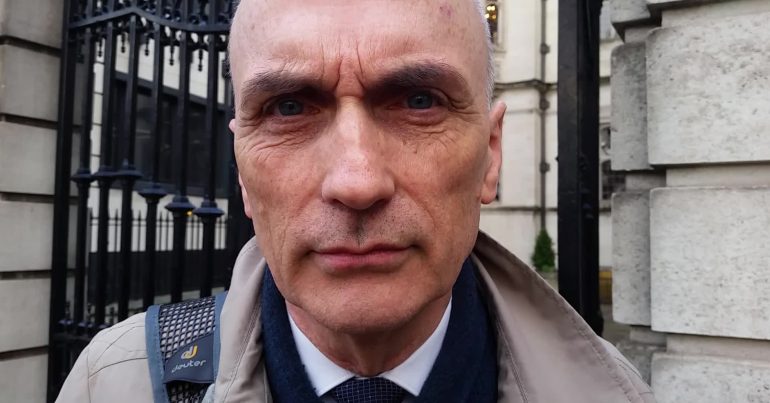 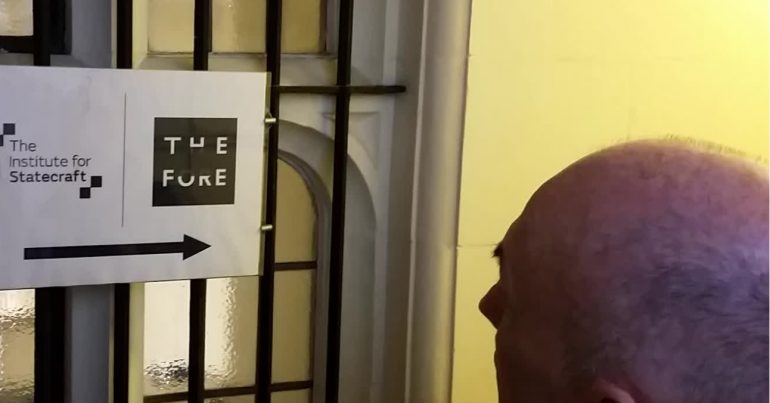 The Canary has compared a photo of Dan Lafayeedney (passed to it by David Miller of the Organisation for Propaganda Studies) with a still taken of “Dan” before he slammed the door. We can confirm that “Dan” is in fact Dan Lafayeedney – a co-founder and co-director of Statecraft. 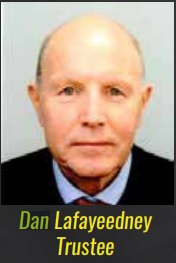 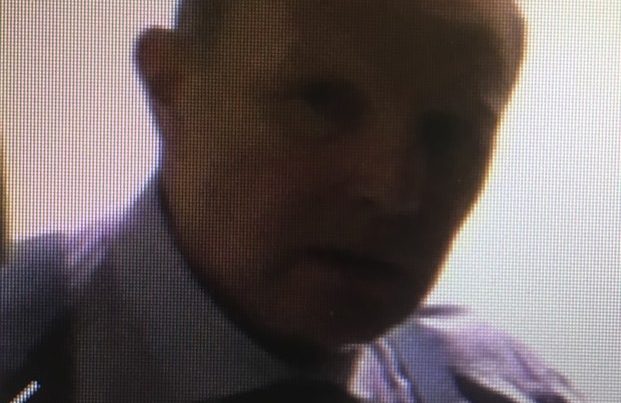 The Canary understands that, minutes after the encounter, Lafayeedney was seen still shouting at the young man from Statecraft who had initially opened the door.

Williamson continued speaking even after the door was shut, asking:

Why is it you have been smearing Jeremy Corbyn and the Labour Party and interfering in the international affairs of fellow European democracies?

I want to ask some questions about Pedro Baños… [knock, knock, knock] hello?

There was no further response from behind the door. So Williamson and The Canary departed from the premises. Pedro Baños is the would-be director of Spain’s department for homeland security who was successfully targeted by the Integrity Initiative’s so-called “Moncloa Campaign”.

Legitimate questions remain as to why a co-director of a registered charity, which is largely funded by the British government, would be so hostile to answering a few questions from a member of the British parliament that he would slam the door in his face.

Williamson then told The Canary and the Grayzone Project that:

Obviously, Dan is not very talkative this morning so we have to… seek out other avenues to try and get to the bottom of precisely what this shady organisation is [doing]

As The Canary and the Grayzone Project have previously reported, Statecraft is a thinktank that directs the Integrity Initiative, another ‘counter-disinformation’ outfit which has received funding to the tune of £2.2m from the FCO alone. NATO and the US State Department also fund this ‘psyops’ network. Recently leaked or hacked documents have exposed Integrity as directly interfering in the national security affairs of the Spanish government, by using a network of journalists to attack the socialist party’s preferred candidate.

Integrity’s aims are ostensibly “revealing and combating propaganda and disinformation”. However, this activity also appears to include ‘smearing’ left wing activists and politicians, including Jeremy Corbyn, the leader of the UK opposition.

Lafayeedney set up the “Atlantic Committee” within Statecraft, which liaises directly with NATO. Lafayeedney, as director of the Institute for Statecraft, is also linked to MOD-funded projects targeting young people and ‘minority communities’.

This would appear to be part of ‘counter-radicalisation’ efforts connected to the controversial and racialised surveillance programme known as Prevent. Defence minister Tobias Ellwood has confirmed that:

In Financial Years 2016-17 and 2017-18, the Armed Forces Covenant Fund Trust’s Local Grants Programme awarded a total of £177,650 to 12 separate small projects run by the Shared Outcomes Programme, an initiative of the Institute for Statecraft which works with young people (aged 14 – 18) from minority communities in areas facing economic and social challenge and aims to increase participants’ life opportunities and support them in fulfilling their potential.

The Shared Outcomes projects enable young people to take part in challenging activities such as assault courses, night navigation exercises and camping while visiting an Army base, and other activities designed to improve community cohesion.

In 2013 Lafayeedney wrote a detailed piece for Statecraft in which he hailed the successes of cadet schools and programmes such as the Active Change Foundation (ACF), of which Lafayeedney was a director until 6 October 2017. Chris Donnelly, the other co-founder and co-director of Statecraft, was also a director of the ACF until 6 October 2017. The ACF has received funding to the tune of hundreds of thousands of pounds, primarily from the FCO and Home Office, but also from local authorities and police forces.

Lafayeedney called for an increased role for the armed forces in British society in his article entitled The Military’s Role in Building a Healthy Society. Lafayeedney praises what the British military can offer young people, writing that:

From a teacher’s perspective, the benefit to mainstream education in the UK of Cadet Forces and other ‘Youth Engagement’ projects is that they make a special and unique contribution to the broader education of young people

The Canary has published numerous stories on how the British military establishment launched what has been called a “militarisation offensive” in 2006, to increase support for British foreign policy. This campaign includes increased military targeting of children and schools for recruitment and propaganda purposes, and encouragement of “cadet” schools. Most recently, The Canary reviewed the film War School: The Battle for Britain’s Children.

SAS combat veteran Ben Griffin explains that from his experience, the British military ethos is about: 1) ensuring soldiers will obey orders without question, 2) instilling a gang mentality, and 3) removing the barrier to kill. Griffin explains this in detail in a video called The Making of a Modern British Soldier. It’s essential viewing for anyone interested in understanding what it may mean to ‘instil a military ethos’ into our children and society, as Lafayeedney appears to support.

The Canary asked Williamson about the “militarisation offensive” that Statecraft appears to be participating in. Williamson told The Canary and the Grayzone Project:

We need to be putting more money into our social infrastructure, into our education, into welfare, into social care, into the kind of public services… that define a decent society. A decent society isn’t defined by having big spending on military, big spending on the Foreign and Commonwealth Office… And I think it is really important that we expose the direction of travel that very senior figures in government, and people behind government in officialdom, are wanting to take this country, because that would be an incredibly retrograde step in my opinion.

The military and national security establishment should not be deciding policy for millions of people. It’s the people who should set social policy, once they have all the facts, and our institutions that should carry it out. For that reason, any and all political and propaganda activities carried out by Statecraft, and affiliated organisations, must remain under intense scrutiny.

– Write to your MP and demand they seek further answers into the activities of the Institute for Statecraft and the Integrity Initiative (always be respectful when you write letters, they are much more likely to be effective when clear, to the point and respectful)