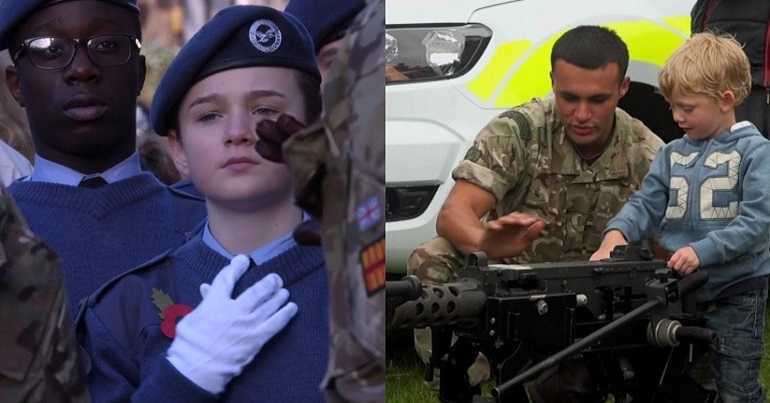 Saturday 30 June 2018 is Armed Forces Day. This showcases hundreds of events across the UK. The purpose, we are told, is to offer everyday people the “chance to show your support for the men and women who make up the Armed Forces community”. But a new report exposes the dark reality behind Armed Forces Day and the ‘British values’ that they are linked to.

Warrior Nation: War, militarisation and British democracy, published by ForcesWatch, details a “militarisation offensive” launched against the British public by the military, political and media establishments. Warrior Nation argues that events like Armed Forces Day are part and parcel of a creeping militarism and militarisation of British society, designed to suppress dissent and ensure long-term support for war.

The report finds that engineering widespread support for military action among the British public has not been very successful. But militarism has nonetheless had an incredibly corrosive effect upon social norms and liberties. Attempting to create a society that accepts a state of permanent war, the establishment has sought to suppress multiculturalism, freedom of speech, and the right to dissent.

Militarism, as defined by ForcesWatch, includes the spread of military ‘values’ across society in order to create [pdf, p13] “a more permissive culture for the use of force”. This can include glorifying war, with or without glorifying the violence.

The report lists “twelve core tenets” that militarism embeds into British society. These include [pdf, p14]:

The ‘militarisation offensive’ of 2006

The militarisation offensive began in 2006, as public support for Britain’s military involvement in Afghanistan continued to drop:

The four objectives of the militarisation offensive were [pdf, p7]:

The British Armed Forces have historically had strong favourability, the report says. But this rarely translated into support for Britain’s wars, as the graph above shows. In order to remedy this, ‘moral panic’ was engineered.

False and distorted stories began to circulate about public abuse or neglect directed towards military personnel. One story allegedly involved injured soldiers being abused at a public pool. This led to a national outrage, including statements from former military chiefs. A subsequent police investigation found [pdf, p28] that the media reports were “not correct”. The incident came seven weeks after the ‘Help for Heroes’ military charity was established.

Another example of fabricating ‘moral panic’ was the story of allegedly ‘poor turnout’ for a military parade in Abingdon. The Daily Mail contrasted that with a massive homecoming in Colchester in 2008. However, Warrior Nation explains [pdf, p26] that the local station commander was displeased with the Daily Mail article. Colonel David Kelly had explicitly asked for a ‘low key’ event “because some of his soldiers were still serving in Iraq and the funeral of one soldier was being held on the day of the parade”.

The invention of tradition

Furthermore, claims that there has been a ‘Military Covenant‘ dating to the 19th century are simply false. This is also part of the militarisation offensive.

The ‘Military Covenant’ was invented in 2000, the report says. And until 2006, there was practically no reference to it in the UK press whatsoever:

In 2006, General Sir Richard Dannat, then Chief of General Staff, told [pdf, p10] the Ministry of Defence that:

Since 2006 the military have broken constitutional convention and made public attacks on politicians, leading to the most severe tensions in political-military relations since the Second World War

The most infamous example of this is when an unnamed senior serving general reportedly told the Sunday Times that the British Army:

could stage mutiny under Corbyn

Mutiny would apparently occur should a future prime minister Corbyn seek to draw down troop numbers, pull out of NATO, or scrap the billion-pound Trident nuclear weapons system.

Since 2006, multiculturalism has been blamed for weakening so-called ‘British values’ and the ‘resolve of the nation’. And some see military schools as being capable of promoting assimilation by eradicating cultural difference, the report says.

echoed General Dannatt in attacking multiculturalism and advocating a more assertive, ‘muscular’, assimilationist and conservative British Christian nationalism. The stronger defence of ‘British (conservative) values’ at home would help to defeat Jihadis in the domestic ‘war of ideas’…

The ‘Military Covenant’ also became a vehicle for the military and the Conservative party to attack the Labour government.

Militarism and the danger to British democracy

Irrespective of where one stands on any given conflict, valourising the military and its ethos can lead nowhere good. Placing either soldiers or the armed forces beyond critique is dangerous. It is important to remember that the military is an authoritarian institution, which does not value dissent.

If events like Armed Forces Day continue to be celebrated uncritically, then the ability to challenge state policy may one day become a thing of the past.

– Also learn more about militarism and resistance to it in Britain via the Peace Pledge Union and ForcesWatch.