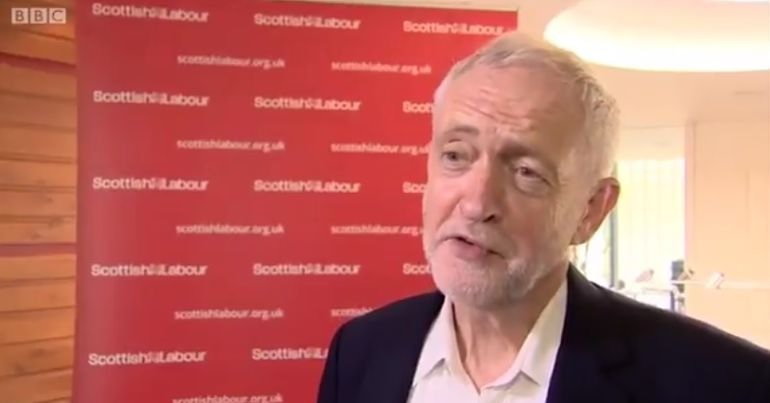 Danny Dyer tore into ex-prime minister David Cameron over Brexit on 28 June. During an appearance on Good Evening Britain, the Eastender‘s actor called Cameron a “twat” for ‘scuttling off’ after the referendum. Jeremy Corbyn was also on the show, but kept mum during Dyer’s outburst.

The Labour leader, has now responded to the actor’s assessment of Cameron and Brexit. During an interview, Corbyn said of Dyer:

Too true, Corbyn. Too true.

The BBC caught up with the Labour leader to get his views on Dyer’s popular outburst.

Jeremy Corbyn: "@MrDDyer has a special way of saying things… I like Danny Dyer a lot." pic.twitter.com/0LyIuDSJ9i

The interviewer posed the following question:

What did you make of Danny Dyer’s Brexit analysis… particularly his comments about David Cameron?

Well, it was short and to the point, and Danny Dyer has a very special way of saying things. But he was expressing a frustration that an awful lot of people feel. Danny Dyer is somebody that wants to live in a country that has a degree of equality about it, better than it does now, and he says it like it is.

I must say, I like Danny Dyer a lot… I do watch Eastenders, and I enjoy his acting on that.

As Corbyn points out, there are many people who share Dyer’s frustration. Not only with, as Dyer puts it, the “mad riddle” that is Brexit. But also with the lack of accountability from politicians for their actions and choices.

That frustration is evident. It’s clear in the thousands who marched on parliament demanding the government be held accountable for its butchering of the NHS on 30 June:

It’ll be obvious too in the thousands who are expected to attend the Together Against Trump demonstration on 13 July. This protest isn’t only about Trump’s monstrous policies though. It’s also pushing back against the UK government’s decision to create a “hostile environment” for immigration.

Accountability is crucial. On that, most UK citizens agree with Dyer. The popularity of his comments, however, also suggest many agree Cameron is a “twat”. As Corbyn says, Dyer tells it like it is.