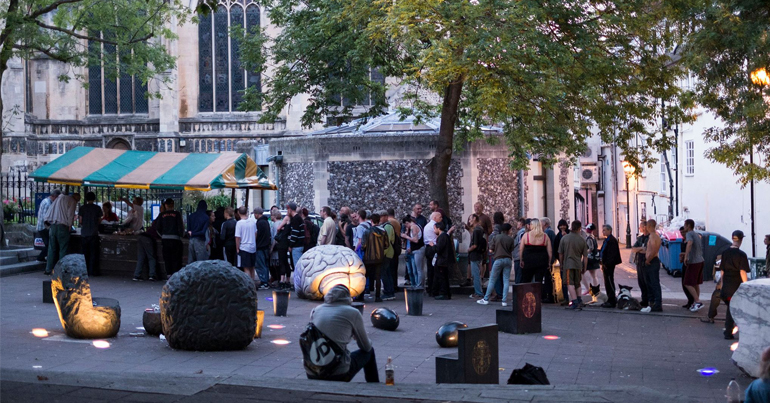 Norwich City Council is facing criticism for allegedly backtracking on a promise not to remove two market stalls in the Hay Hill area of the city. Volunteer groups working with homeless people use these stalls to serve meals. They claim the removal is part of an “underhanded attempt” to erase the work of community-led projects.

And it’s not the first time this has happened. This is the second U-turn made by the council and it’s led The Norwich Soup Movement to accuse it of telling a “gigantic, barefaced lie”.

perpetuates issues of dependency and … also results in the area being a significant hotspot for crime, drugs, street drinking and ASB [anti social behaviour].

And he goes on to say these issues will be addressed by working with a social enterprise known as The Feed. But it’s Malik’s statement that the two stalls face “eventual removal” that has stoked anger amongst volunteers:

“A massive kick in the teeth”

The stalls are an important venue for four community-led projects: The Peoples’ Picnic, The Norwich Soup Movement, Empathy Action Time (EAT), and Anon Street Team – Norwich. One, a former jewellery and clothes market stall, has been used by the four since 2013 to serve food.

All four groups reacted to news of its removal with anger. The Norwich Soup Movement said in a statement that it’s “a massive kick in the teeth after us grassroots groups have put years of our lives into direct action”. And The Peoples’ Picnic claims it’s part of an attempt to remove “community led initiatives” from working directly with homeless people. And this is an issue because

it matters hugely to [homeless people] the fact we were a non-profit, community-led bunch of unpaid regular people and feel it’s what sealed the bond between us and the community that use our service.

While The Norwich Soup Movement added:

The loss of the on street soup kitchens will be detrimental to so many people. We’re not just a food service, we’re a community, and we care deeply about our friends and their best interests.

But this isn’t the first time council statements on this stall have provoked anger.

A similar story occurred in January when the council proposed removing the stall due to its alleged “age and condition”. But after a petition was signed by nearly 45,000 people, the council chose in February to repair the stall instead. Alongside this, it held a meeting with representatives from the four projects where they “were assured it would remain”.

Norwich City Council was contacted by The Canary at the time and said:

If this stall can’t be repaired we will work with the food organisations concerned to ensure they have a suitable facility so they can continue to work in this area.

No further details about a “suitable facility” were given. But it suggests the council were happy with the work of groups such as The Peoples’ Picnic. Yet Malik’s comments just five months later are very critical.

Despite Maguire’s statement on 26 June, Norwich City Council has said once again it’s not removing the stall. Responding to The Canary, Maguire said:

The council has recently invested in repairing both stalls on Hay Hill so that they can continue to be used by food groups for as long as they’re needed, and there are no plans to remove them. In the long term, we are also working with partners to look at the options for indoor food provision, housing advice and joined up support.

What I would like to see is no one having to sleep rough, but with a backdrop of government austerity this is difficult to achieve. However, this does not mean we won’t try to prevent rough sleeping, and the Pathways project will bring together specialist agencies to enhance the help available to rough sleepers, so that any issues they are facing can be addressed collaboratively and not in isolation.

The food projects don’t trust this claim. Speaking to The Canary, EAT said:

It’s the second time they’ve done this… [The council] said they’d keep grassroots groups in the loop re: homelessness strategy when we met at that time, but no communication on it. Bit hard to take their word on anything.

But Norwich City Council has created the Pathways project without speaking to the city’s four community-led food projects. It is working instead only with charity and religious organisations that already have long-term relationships with the council.

This includes social enterprise The Feed, which is the council’s key alternative to food projects on Hay Hill. Started in 2014, it quickly received backing from Norwich City Council, Norfolk Police and business growth initiative New Anglia LEP. Currently based in Norwich market, it is crowdfunding to take over an empty property on the city’s notorious Prince of Wales Road.

Speaking about this, The Norwich Soup Movement claimed:

The proposed premises for this new provision is actually on Prince Of Wales Road, and I for one cannot imagine a WORSE setting for such a service – it’s genuinely frightening that the most violent, drink and drug-fuelled area of the city will be the place that vulnerable people have to visit in order to eat.

Speaking to The Canary, The Peoples’ Picnic said:

We strongly feel if we did not provide this service, people would ultimately turn to more criminal methods of acquiring food or many would just go hungry and deteriorate in health.

Norwich’s four community homeless food projects are essential. They provide homeless and other vulnerable people with access to food without judgement or bureaucracy. The stall is important because it is central, away from the city’s pubs and clubs, sheltered, and free to use.

The core issue is not its physical removal, but that its removal represents an attack on community solidarity. And contrary to the council’s statement, this solidarity is an important source of independence for people in Norwich, with or without homes.

– Donate to The Norwich Soup Movement via Paypal using the email [email protected].

– Consider buying something on The Peoples’ Picnic’s Amazon wishlist.

– Read more about homelessness at The Canary.