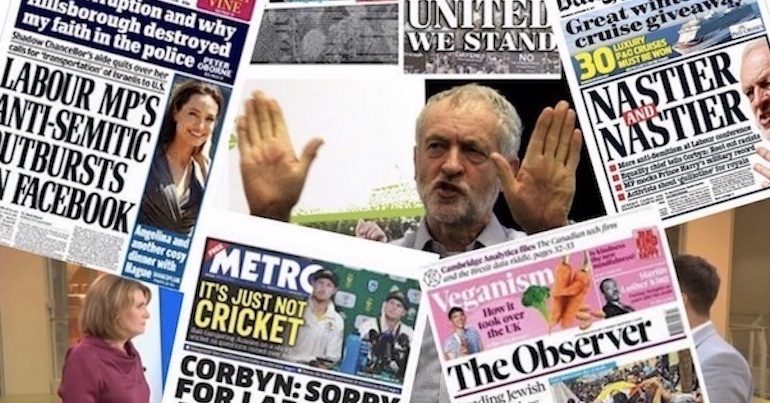 As The Canary previously reported, damning analysis from the Media Reform Coalition (MRC) revealed that mainstream media coverage of alleged antisemitism in the Labour Party was “misleading”, ‘distorted’ and “inaccurate”. In response, Noam Chomsky, Ken Loach and 25 leading academics signed a letter in support of the MRC’s findings, stating that mainstream media outlets “failed their audiences”. But the Guardian – one of the outlets which the MRC criticised – failed to report or comment adequately on the research.

One of the report’s authors then made a formal complaint, which still received no meaningful reply. So he’s now published details of this complaint in an open letter. And he’s spoken out about the issue to The Canary.

A formal complaint about the Guardian‘s wall of silence

On 1st October I submitted a formal complaint in regards to the evidence of inaccurate and misleading coverage on TheGuardian.com of antisemitism in the Labour Party…

[O]n 5th October… you stated that “When I have had an opportunity to look at the material I will be back in touch.” I have not heard from you since.

Schlosberg also explained that this failure to respond raised “fundamental concerns about the Guardian’s commitment to accountability”. And he outlined his concerns in more detail to The Canary.

Schlosberg told The Canary that he published the open letter after exhausting every effort to “engage in a constructive way with editorial and public affairs staff” at the Guardian. He also gave them additional evidence about these claims.

He insisted that the lack of response was:

really not acceptable, for any newspaper, let alone a newspaper that… claims to be credible and do good journalism.

The report, he said, highlighted “a serious problem”. He explained that it’s “vital” for an outlet “that sees itself as a bastion of quality journalism” and “perceives itself as accountable to its readers” to “take this kind of evidence seriously”. He also insisted that the MRC report made no claim of “inherent bias” in Guardian reporting, and that he hopes the open letter will push the Guardian to “offer some kind of reflexive response”.

I’m afraid silence and ignoring it is not going to make it go away.

The MRC report found issue with several other outlets too. But in this instance, it’s only seeking further clarification from the Guardian. Schlosberg explained that, after a previous report, the MRC entered into “protracted discussions with senior people in editorial positions at the BBC“. Yet “absolutely nothing” came from this. He said the MRC “submitted a formal complaint” but the BBC “dismissed” it.

“A thorough and comprehensive review”?

A Guardian spokesperson told The Canary:

This complaint is subject to a thorough and comprehensive review by the Guardian’s independent readers’ editor, who updated the complainant on the progress of this issue yesterday, on request.

Schlosberg said he had indeed heard from the Guardian. But he said there was still absolutely no indication of timescale or clarity about when the Guardian would address the issues that the MRC had raised.

The bigger picture: mainstream media outlets ‘just getting away with it’

Schlosberg also said that, at a time of “such acute political controversies”, there’s an “even bigger problem”. And there’s an ever greater need to hold the media to account for its “failures”.

Most mainstream media outlets are regulated by IPSO (the Independent Press Standards Organisation). But both the Guardian and the BBC have independent regulation systems. Schlosberg said he presumes both outlets think this is more effective. But he also explained that it posed further questions, particularly in relation to coverage of Labour Party leader Jeremy Corbyn.

In 2017, the BBC Trust upheld a complaint about a report by Laura Kuenssberg. Yet as Schlosberg explained:

There was no response from the BBC‘s head of news other than to say he ‘simply disagreed with the Trust’s findings’. What kind of an effective, independent system of media regulation allows that – even when a complaint is upheld, for the editor in question to just ignore it or dismiss it? It’s absolutely absurd, actually.

He also described how, “in any other area of professional life”, regulatory standards are far higher. And he insisted:

I’m afraid that, for far too long, mainstream press and broadcasters have just got away with it.

“A force for progressive change”

Schlosberg noted that, since the phone hacking scandal and Leveson Inquiry, he sees more “consciousness and sensitivity” around the role and collective responsibility of our media. He also thinks this increased further after the “very significant controversies” surrounding the media’s woeful coverage of Jeremy Corbyn. And he hopes this consciousness acts as “a force for progressive change” in media regulation.

Hopefully, his open letter will also play a part in fostering that change.